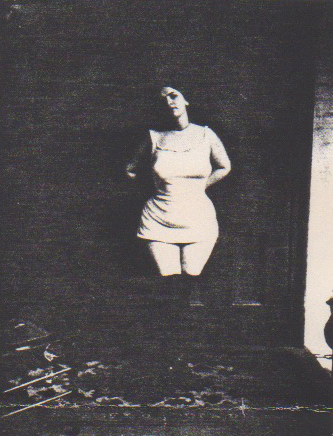 Legend has it that a fungus-covered treasure trove of glass plate negatives were discovered in a desk drawer belonging to an obscure New Orleans commercial photographer, E.J. Bellocq, who died in 1938 with a Kodak Bantam strung around his neck. When not eking out a living photographing nuts and bolts for ship building outfits in the romantic port of New Orleans, Bellocq focused his 8 x 10 inch plate camera on the beefy belles that populated the notorious Storyvine red light district in the early 1900s. Rescued by the photographer Lee Friedlander in 1966, the fragile negatives were painstakingly restored and printed by Friedlander and gold toned for archival and collecting potential. The Museum of Modern Art first exhibited part of the Storyville
Portraits in 1970. Louis Malle turned the dwarfish and hydroencephalic Bellocq into a tall and handsome Keith Carradine for the 1977 film Pretty Baby (Brooke Shields).

Despite fictitious twisting in the cinema, Bellocq’s virtuosity as an artist comes through the curiously marbled contact prints. The plump prostitutes pose in front of Louisiana college pennants, a hokey still life propped up with a fifth of “Raleigh Rye,” even laundry hung out to dry on the line. The eighty-four pictures produce a powerful document on a sociological plane as well as a black and white love affair between the camera eye and the subject. With fleshy arms positioned behind her back, the blackstocking’d nymph in a near bursting cotton camisole exhibits her wares in a most charming and innocent way. Nelson Algren, who wrote about a seamier side of Storyville twenty years later in Walk on the Wild Side, would never approve.