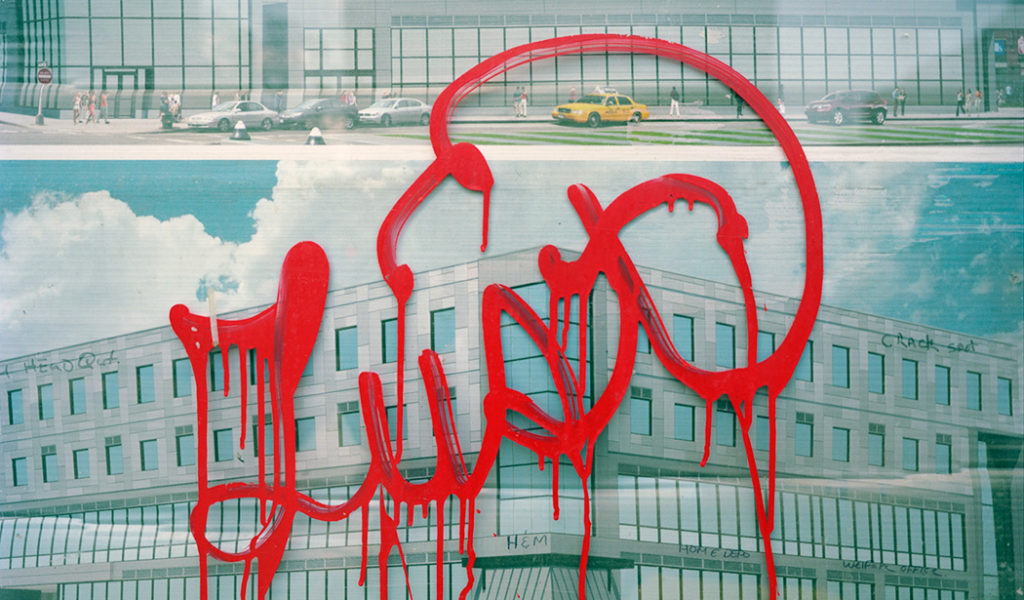 Following on the heels of the photographer’s celebrated “Birmingham: Four Girls and Two Boys” project reframing the 1963 bombing of the 16th Street Baptist Church in Birmingham, Alabama from 2012,  is showing a new series at the Stephen Daiter Gallery in Chicago, 15 48-by-40 inch archival pigment photographs focusing on the changing streetscape face of Harlem.

Though Bey lives, works and teaches in Chicago, Harlem is a longtime touchstone, dating back to his early and still stunning “Harlem USA (1975-1979)” series of 25 black and white portraits of residents there. That project launched his career, debuting at the then nascent Studio Museum of Harlem.

The Daiter exhibition, “Harlem Redux” (through December 3), reunites those stunning black and white street portraits, including “A Man in a Bowler Hat,” “Two Girls In Front of Lady D’s Sandwich Shop” and “A Man on the Corner of Lenox Avenue and 125th Street, Harlem,” all from 1976, combining them with the new photographs.

There’s no confusing the two bodies of work — with the early black and white series hung salon style and confined to a single wall, while the larger format color works take up the rest of the gallery spaces — or the very different Harlems they depict. The show is a tale of two neighborhoods.

Bey drills deeply into the bedrock of Harlem, roving streets that are undergoing profound change — or, as the title suggests, being brought back, in one sense or another.

That dictionary definition of redux may be a tad mild for what Bey has accomplished. He presents a changing cityscape as it happens, not so much “before and after” pictures as images of somewhere in between.

In one, an empty lot is seen through a cut-out construction site window in the wooden fence surrounding it. The viewer sees a glimpse of rubble and the back end of a bulldozer. It seems at first completely anonymous yet familiar, a demolition site without a clue of what was there before.

But Bey’s title for this work, “Former Renaissance Ballroom Site (From Harlem Redux),” 2015, infuses the picture with an identity, that of a now-destroyed Harlem shrine and entertainment complex, also known as “The Aristocrat of Harlem,” that presented live jazz, Ragtime and Blues as well as live theater. The announcement of its openning in 1921 billed it as “the first and only Theatre in the City of New York that has been built by Colored capital and is owned and managed by Colored people…This Theatre should appeal to your sense of racial pride.”

For the most part, the photographs aren’t baldly critical of what’s happening to Harlem, or indicting of those who are transforming it; as Bey puts it, his intent is “to form a larger narrative about absence, memory, change, and loss.”

Another, decidedly more abstract image of a construction site fence, “Lenox Lounge (From Harlem Redux)” resembles an Alberto Burri stitched and torn panting more than a documentary photograph. The weather-distressed and richly patinaed barrier hides the ghost of the storied jazz club and bar where Miles Davis, John Coltrane and Billy Holiday performed in the bar’s famed Zebra Room. You wouldn’t know it by looking, but directly across from the former club site is a totally transformed development boasting a Whole Foods.

Some of the photographs, such as “Boy on a Skateboard,” “Couple Walking” and “Young Man, West 127th Street,” reference in part the kind of figures Bey is best known for capturing, but they’re really just passing by. You can’t see their faces and their relative anonymity fits with the changing landscape and escalating rents.

Bey was no doubt deeply influenced by the great studio photographer James van der Zee, whose photographs made up most of the wildly controversial and criticized “Harlem On My Mind: Cultural Capital of Black America” exhibition at the Metropolitan Museum in 1969, which Bey visited as a 16 year old, as well as by the black and white work of fellow African-American photographer Roy Decarava, who roamed jazz clubs in Harlem and was anointed with a Museum of Modern Art retrospective in 1996. But throughout his career, and particularly in these works, Bey’s practice has nimbly leaped beyond portraiture.