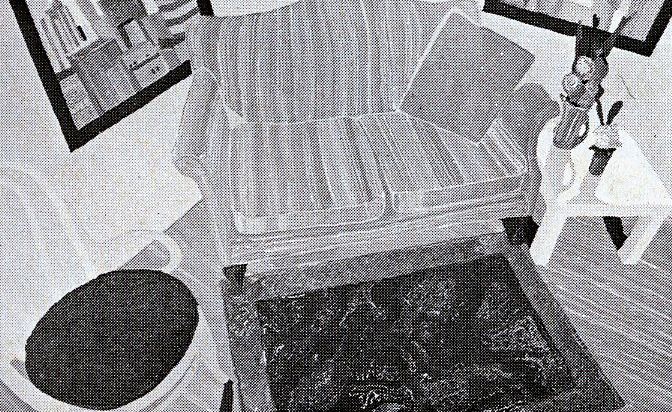 Over brushless interiors of baked rhoplex and acrylic, winnowed from a pop librarian’s horde of House Beautiful magazines, Hendon lays down gluttonous beads of paint from an array of Tupperware beakers.

L-shaped banquettes and 18th-century English suede-upholstered armchairs ebb and flow like lava lamps alongside a dainty French mahogany table. The sterile fantasy of the interior designer undergoes a Dr. Jekyll and Mr. Hyde face-lift. The somewhat boring interiors swim like brilliant gems under a shallow layer of water. Up close, the mellifluous sheen of the surface is pock-marked by air bubbles, reinforcing the notion of prospecting for fool’s gold.

The pictures have windows you can look out from. The midtown Manhattan skyline, pierced by the slow-moving aerial tramway to Roosevelt Island, thuds into perspective with metallic shades of grey. The black and white boundary line of River View ties the artist’s interior and exterior world into a stevedore’s knot.

Hendon jousts with the commercial advertising market, using its images as a springboard for his more adventurous diptych concoctions. Other times he dips into art history or even Time Magazine to poach subjects. So in his new show, Gertrude Stein surfaces, awash in black, bigger than a monument, are enthroned in contemplation under Picasso’s portrait of her. Not far away, slouched in a different kind of armchair, New York City’s Mayor Koch cradles a baby blue Princess phone to his ear. The trappings of high office are abundant, with loaned objects from the Metropolitan Museum. A statuette of Romulus and Remus stands sentinel on the fire- place mantle while a Matisse odalisque lends a sultry ambiance.

With the new work a shade more conservative than his famous “bad paintings” of motel rooms, the more mature Hendon injects his quirky interiors with landmark fixtures and plenty of drapery, creating a scherzo of poured pointillism.

This entry was posted in Reviews and tagged Cham Hendon, Phyllis Kind. Bookmark the permalink.