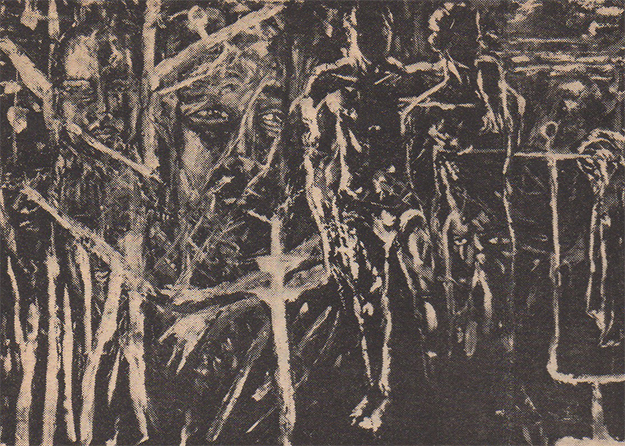 It seems that the Lee Strasberg School of Method Acting and the black leather boot marks of James Dean and Marlon Brando have crash-landed like dandruff on the shoulders of the Young Bunch in the 1983 Whitney Biennial.

Keith Haring slam-dances into a wall of the Whitney. It is Guer-nica run through a sieve on Avenue C, a Sunday stroll in a black on white jungle. The radiant babies chok6 on leashes reined by minotaur-headed dog-gies and the nuked-out hierogly-phics strafe white space.

On the flip side of Haring’s Wall, another kind of war unfolds in Leon Golub’s massive, 10 x 14′”Interogation (II).” The canvas hangs by industrial grommets, a subtler form of tor-ture than the bigger -than-life goon squad, prodding their vic-tims with nauseating gusto. Golub is no kid, a veteran of the 1959 New Images of Man show at the Museum of Modern Art renlember that place?). So? So there’s a couple of older types in this young bunch notion and another cycle of manic figuration has captured the collective eye of bounty-hunting curators. You can roll Golub’s unstretched canvas up like an oriental rug and hide them when the com-pany comes. In Haring’s case, you call the maintenance crew and they white-wash the wall. Clever. Non-toxic, hypo-allergenic.

Keeping the honey-comb aluminum pieces on the chess board in mind, a couple of other knights spur their steeds in mirror-preening impatience David Salle’s triptvched, mix-med ia’d melange, “Poverty is No Disgrace” (Ha), hangs an Eames-style chair from the middle panel, daring the viewer to take a seat and see if the painting holds up. (Don’t bother You can’t afford it.)

A more arresting triptych to ogle (the Whitney has been turned into a cubby-holed and klieglighted corral of hermaphroditic stallions, each straining to outdo the other), is Eric Fischl’s “Inside Out.” It is a scriptwriter’s episode of “Dallas,” a rough-rider, mounted bare back under the myopically icy presence of a Breuer chair and video camera. The monitor is a bit fuzzy but the rumpled foreground fills in the details. Fischl’s perverse universe of smirking punks lifting up the skirts of their va-va-voom siblings, is corruptingly outrage-ous. In another work, “The Old Man’s Boat and the Old Man’s Dog,” tongue-in-cheeks Wins-low Homer’s “Gulf Stream” but in a skipperless Love Boat. A wagging Dalmatian sniffs some nubile flesh on a sun-baked cushion while a monstrous, lapis-lazuli wave dreamily zeroes in for the kill.

With all the oompah of dramatic installations–from Jona-than Borofsky’s barefooted and pony-tailed superman (“Man in Space II”) to Mike Glier’s mushroom-clouded d,ayd ream over an empty plate (“Nuclear Accountability: I Blast Me”)–an appropriate Ferrante & Teicher soundtrack is sorely missed. The sun-drenched chirpings and moanful violin strings emanating from Mary Lucier’s monotonously—monitored “Ohio at Giverny” is from the wrong century The Biennial needs the anti-phonic racket of a Glenn Branca to bruise the visitor’s eardrum as well as eyeball, as so effortlessly demonstrated by William Wiley, a brown-speckled egg sandwiched in an Easter Basket of otherwise white ones.

This duplex salon of cham-pions has a funny way of arrang-ing furniture. In the Angst Room, Julian Schnabel’s smarmy oil on red velvet, “What to do with a Corner in Madrid” (Condemn It?) glares at Susan Rothenberg’s cream-cheese-blottered “10 Men.” Down the hall in the Stand-Up Comics’ chamber, R.M. Fisher’s gutter snipe pop lamp sculptures illuminated a carpeted corner, a stogy away from Robert Colescott’s “Listening to Amos and Andy,” but downwind from Mark Tansey’s headbutting canvas. 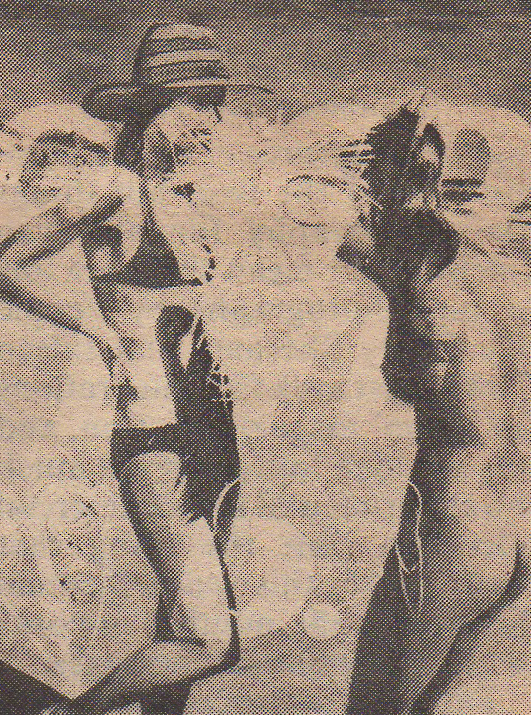 This time around, the Biennial aquarium of blowfish gets a smaller tank (due to the permanent collection on the third floor with works from the first Biennial in 1932) and a number of annoying, that is, abstract forms have been weeded out. A high strung sampler of regional porgies from outlying lakes fill in the main courses, like an unfamiliar bowl of sharksfin soup. Just as in the signature rump on a pair of Gloria Vanderbilt jeans, the crushingly familiar images blink their neon logos: Longo showes us the bratty offsprings of television commercials and Jenny Holzer–the Walter of Lippmann „of the Gloom & Doom set snarls, “Don’t Talk Down to Me.”

With all of its sledge-hammer editing the Biennial limelights a forgotten titan, Joan Mitchell, and throws in-for good measure?–an amputated arm from Jasper John’s steamer
trunk