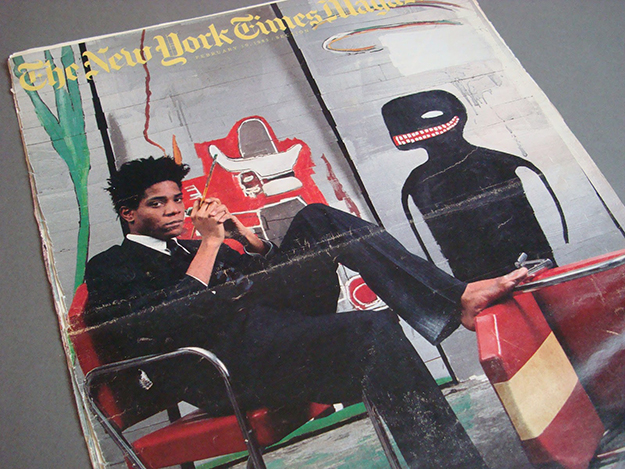 The barefoot wunderkind stares into the camera, hands posed in prayer, the tip of the clasped paintbrush pointed to the heavens. Well, that’s sort of what the cover photo in the New York Times Magazine looked like a few weeks ago. But now it’s time for Jean Michel’s show which isn’t as exciting as all the breathless (as in emphysema) art market hype in that cover story. As the graffiti chalk scrawl says a few blocks from Boone’s, “Convict the Fame Cult.”

A couple of the new paintings are done on planks, resembling the kind of rafts you read about in children’s adventure tales, constructed out of desperation to escape from a dangerous island.

Basquiat’s figures look as if they’ve been drafted from the Met’s Primitive Wing and slap-ped around with some text book charts on the fundamentals of chemistry. Basquiat can get the blood moving. “His Glue-Sniffing Valet” is a tough picture filled with the concrete tension of the city. A wheel-chair bound figure with a monster’s head negotiates a high curb. A shopping bag per-ches precariously on his lap. Standing behind the cripple an abstracted figure with a Henry Moore head appears ready to commit a felony.

The paintings are slathered with diagrams and repetitions of broken verse. “I had a dream last night I was dead” is one of the more arresting shards in “MP.” His Rasta Man in a double-breasted jacket (no doubt linen and silk) is the he-man punk harlequin. The black attache case and skull cap are new ac-cessories for an art world filled with Michael Korda’s. (Mary Boone, 417 Broadway, to March 22. )

This entry was posted in Reviews and tagged Jean-Michel Basquiat, Mary Boone, Soho. Bookmark the permalink.