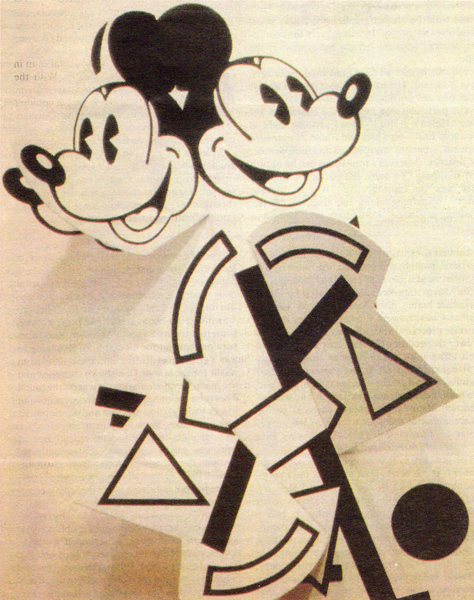 The $4 billion Euro-Disneyland opened last month on the outskirts of Paris, and Mickey Mouse was on hand to greet the tourist hordes. On a par with Marilyn and Elvis,Mickey is a mighty icon, a star of America’s popular culture. John Updike’s soulful and
informative introduction to The Art of Mickey Mouse warns us that Mickey, in his ringmaster persona at Disney’s theme parks, “is in a danger, in these nineties, of seeming not merely venerable kitsch but part of the great trash problem, one more piece of visual litter being moved back and forth by the bulldozers of consumerism”.

Updike describes Mickey’s cartoon world as “half way between our world and the plane of pure signs, of alphabets and trademarks”. It also serves as a definition of Pop Art and practically all of the consumer-smart, appropriated image culure of the consumer-smart, appropriated image culture of the 1980s, whether it be a Jeff Koons polished stainless-steel rabbit or an Andy Warhol silkscreen of Mickey’s head with his famous black bowling-ball ears.

Updike’s text flags once he moves out of nostalgic history and into art criticism. The appropriated images of the copyright-protected Mickey Mouse by most of the thirty-six contemporary artists, cartoonists, illustrators and a lone pop star (Michael Jackson) that make up the book rarely meet expectations. It is an awkward alliance, especially in the light of Disney’s aggressive legal pursuit of other artists caught “tampering” with Disney characters.

There are some exceptions, such as mythmaker Andy Warhol’s four-panel mouseshot of Mickey and Keith Haring’s punky transformation of the animated icon into a more rodent-like creature, framed inside a glowing television screen. Adam Kurtzman’s Arcimboldoized portrait, “Mickey’s Salad Days”, sculpted in fruit and vegetables, is witty. Russell 0. Jones’s water-vegetables, is witty. Russell 0. Jones’s watercolour caricature of Mickey reclining on Freud’s couch isn’t.

Bob Thomas’s Disney’s Art of Animation is a glossy remake of an earlier version by the former wire-service reporter that was initiated at the behest of Walt Disney in 1958. Lavishly illustrated and chock-full of archival material, the volume chattily tells the folksy history of Disney from Mickey’s 1928 silent debut in Plane Crazy (based on Lindbergh’s famous flight) to the making of the studio’s latest animated blockbuster, Beauty and the Beast, created under the aegis of the post-Walt management team that took over in 1984.

Thomas tells some of the same stories found in Updike’s mini-Mickey memoir, including the charming one about the famous mouse nearly getting named Mortimer until Walt’s wife, Lilly, joined the fray, insisting he should be called Mickey Mouse. Many of them come directly from the great animator’s mouth, so the text is peppered with “Walt Disney told me” phrases. Like many of the dolls, toys and T-shirts generated by the Disney machine and sold world-wide, this volume feels and looks like a great souvenir.

Though lacking the elegance of Updike’s writing and spartan in appearance, with only black-and-white illustrations, Jeff Lenburg’s Encyclopedia of Animated Cartoons satisfies the hungriest fact-addict. Lenburg’s nutshell history of the American animated cartoon starts in 1906, with the newspaper cartoonist James Stuart Blackton’s animated one-reel short, Humorous Phases of Funny Faces, crunches along to 1947 and the first black-and-white cartoons shown on television (“Movies for Small Fry”), and finishes in 1988, with Disney’s comedy/mystery, Who Framed Roger Rabbit.

Lenburg flickers across the animated front with wonderfully fussy details so that the reader can track the provenance of superstars like Disney’s Mickey Mouse and Warner Brothers’ Bugs Bunny as well as lesser-knowns, Ferdinand the Fly and his “flyancee”, Gertie the Dinosaur and Magilla Gorilla.

For the animation cel collector (note: in 1989 a Canadian industrialist paid $286,000 at Christie’s in New York for an original black-and-white, hand-painted-on-celluloid image from Disney’s 1934 short Orphan’s Benefit) or popular culture aficionado, the author nails down the faerg and fancies of this still-expanding art form. Some critics have already dubbed Euro-Disneyland a “cultural Chernobyl” and nothing more than “idiotic folklore taken straight out of comic books”. But one should never underestimate Mickey’s magnetic appeal or he fooled by his pipsqueak proportions.