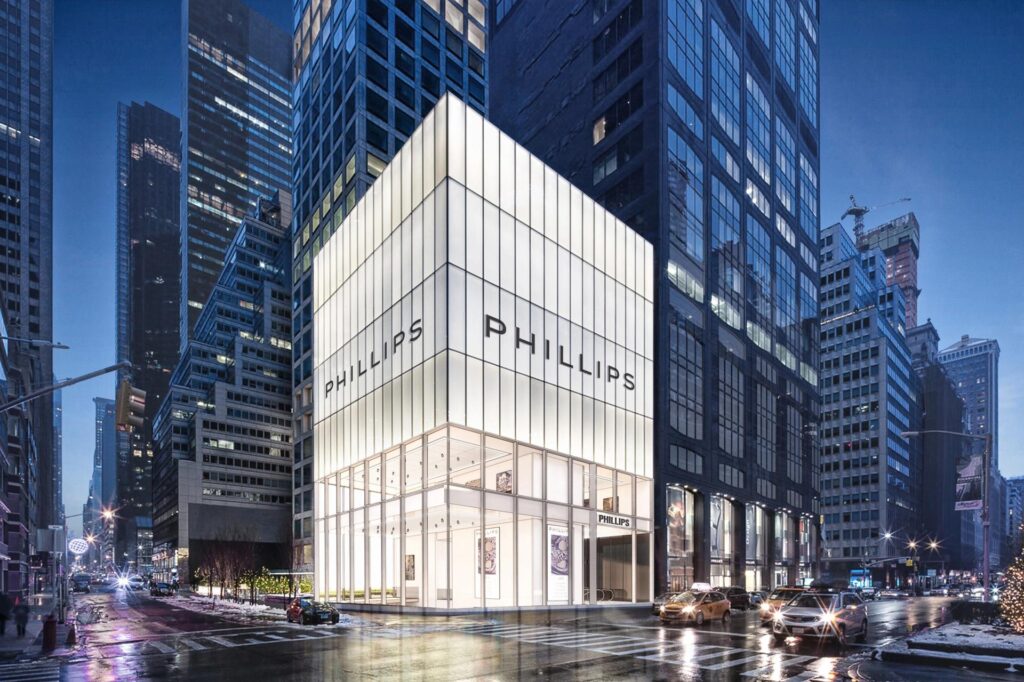 ‘We call for an immediate cessation of all hostilities’ – The firm, owned by the Mercury Group, posted the message on Instagram yesterday, to some criticism.

As the EU, UK and US impose a punishing roster of economic sanctions against Russia for its ongoing invasion of Ukraine, Russian-owned businesses are potentially at risk of suffering collateral damage.

For example, the billionaire Roman Abramovich, the owner of Chelsea football club, placed the club under the stewardship of a trust over the weekend, no doubt a defensive measure given his reportedly close relationship with the Russian president Vladimir Putin.

Yesterday, the Russian-owned auction house Phillips (which last year realised a best ever $993.3m in auction and private sales) attempted to clear the air on Instagram by posting a statement in support of Ukraine, also posted by Jean Paul Engelen, the firm’s recently appointed president, Americas and co-head of 20th century and contemporary art.

The post quoted a message from Stephen Brooks, the auction house’s chief executive: “We at Phillips unequivocally condemn the invasion of Ukraine. Along with the rest of the art world, we have been shocked and saddened by the tragic events unfolding in the region. We call for an immediate cessation of all hostilities in the strongest possible terms.”

The Instagram post featured a blue and yellow abstraction by Ellsworth Kelly, the same colours of the Ukrainian flag.

Phillips, of course is owned by Mercury Group, founded in 1993 by the Russian entrepreneurs Leonid Friedland and Leonid Strunin who acquired the auction house in 2008, when it was known as Phillips de Pury & Luxembourg, for a reported $60m.

Efforts to reach the Russian owners for comment were unsuccessful, although it is understood that the Russian nationals are in sympathetic sync with their auction house top brass in calling for peace.

In that same vein, it is understood the owners are not the subject of any sanctions or affiliated with any parties targeted by sanctions.

Ironically, or so it would seem, Phillips also announced on Monday that it would be selling Jean-Michel Basquiat’s massive Untitled painting from 1982 from the collection of the Japanese billionaire Yusaku Maezawa in its 20th century and contemporary art sale in May in New York .

Asked if he thought the Russian ownership label would harm Phillips’s reputation, Albert Biton, a New York private dealer active in the auction trade tells The Art Newspaper: “No, it won’t affect their business because art collectors are not that thoughtful about it. Most people think Simon de Pury is still the owner.”

However, Matthew Girling, the former chief executive of Bonhams (he left in 2020) and now an independent consultant, tells The Art Newspaper he believes people should still boycott Phillips over its Russian links. “I am glad he [Stephen Brooks] has said this but at the end of the day it is just words. More assertive action needs to be taken to try and stop what is going on in Ukraine. Only a boycott of Phillips’ sales will get the attention of the world and the owners of Mercury to hopefully influence Putin to change his current chosen course of action. We have seen how the world of banking, travel, leisure, sport and culture have responded to the crisis. Can the art market simply ignore it and carry on as normal?”