Skip to contentSkip to content
Institute of Contemporary Art at Maine College of Art
Interview with Harvey Quaytman
August 1, 1997 by Judd Tully 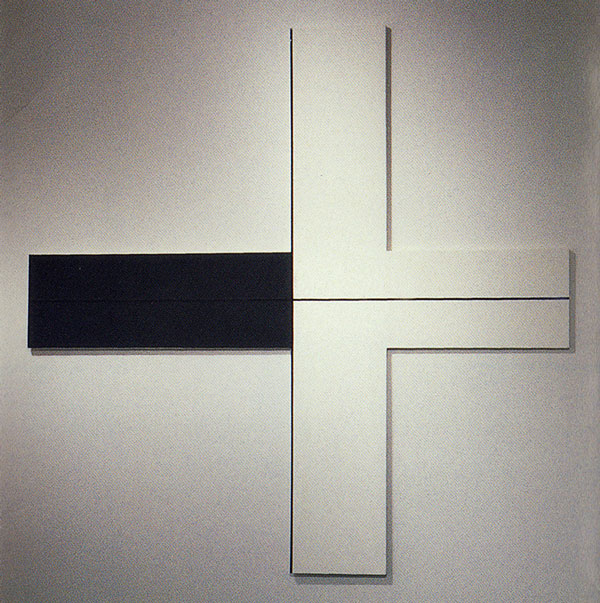 This interview is from the brochure for the exhibition Harvey Quaytman, New Works September 25-November 2, 1997 at the ICA at Maine College

JUDD TULLY: Harvey, so what’s the story behind the new series, and when did it begin?

HARVEY QUAYTMAN: One thing was the size of a painting I’d looked at all summer – Angel, 1995 – my largest painting in twelve years, 80 inches square. I’ve been involved with these cross paintings since 1985, but when I got the idea for making these new ones I immediately got very excited and wanted to make them very big. So I went out and got 80-inch lumber and I made about six stretchers in four days.

JT: Are we talking about carpentry now?
HQ: Very simple carpentry. I also painted about five of the paintings in twice that amount of time. I had all these ideas I wanted to get on canvas, so I could see them.

JT: Were they straight from your head to the canvas?

HQ: Well, they weren’t only in toy head by then. I had made some drawings
color and size indicators. Not drawings in the way I’d been making them in the last three years. The drawings from this last period were all on paper and ranged in site from 12 to 30 inches, so they were pretty small.

JT: Were those the ones you showed at Room in SoHo?

HQ: I showed them all over.  Roost, McKee in New York, Nielsen in Boston, Oslo, San Francisco, Stockholm. I was very happy with them. In a way, they think for me, these drawings, so sty job is just to be aware of that they tell me. Now, toward the end of these drawings, sometime last year, I started to make some that were shaped on the white paper.

JT: What kind of medium?

HQ: The same as all the drawings – ink and varnish and pigment. At any rate, when I taco the shaped cross form in one of the drawings, I got the idea for these paintings. I thought, ‘Oh, I can do that,’ and I wanted to see what they would look like big. It’s funny, but it was like getting an instruction sheet in the mail, and all I had to do was follow the instructions. Now, after doing these 80-inch square paintings – what I thought would be huge – it turns out that since they’re shaped they don’t feel very big.

JT: You mean, because they’re so slender?

HQ: Well, thinned down. I find the thinner the shape becomes the more drama is possible in the painting. Anyway, I fin-ished those and I wanted to make larger ones. It was a feeling of want-ing to stretch my arms, my ‘wings,’ after this long period of these small, meticulous drawings.

JT: Tell me about the large canvas with all the red.

HQ: I did something funny there. I have always hated all the cadmium colors, but I decided to use a color I hated. I thought it would be good for my soul.

JT: Well, it really threw me, because it reminded me of Malevich, you know, all that ‘Commie-Red’ stuff from the early days of the Soviet Union. 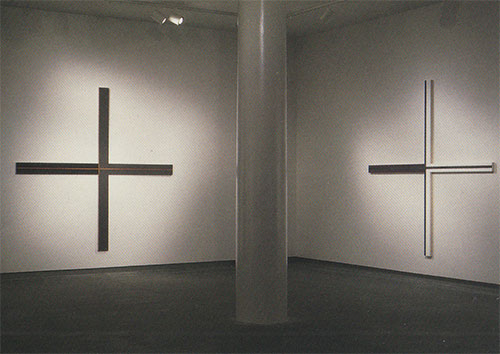 HQ: Well, I cheated and put some yellow underneath. But that’s part of the reason why I don’t like cadmium red – because it’s so associative, and it’s so emblematic of the commercial world, too. I love colors that don’t have those associations.

JT: Tell me about that dark, brownish tint in one of the new paintings.

HQ: It’s mostly walnut stain, but it was behaving very badly, and I remem-bered something that Winston Roeth told me: that it probably needs a catalyst for the pigment. So I put some marble dust in it, and then it went on evenly. But it also took away a little bit of the transparency of the color. What I like so much in that painting is how when the cross is next to the dark gray it breathes, and when it’s surrounded by white it narrows down. In other words, it doesn’t stay static. I’ve been working with old colors, like antimony, which was used to paint reli-quaries. I like using these old, old colors, and resurrecting them. Some of them have never been seen in an abstract painting, not that that helps the painting, but it’s a private pleasure, like burying a gemstone beneath the can-vas. It pleases me.

JT: Tell me more about what you mean by static?

HQ: One of my main concerns is that the cross not be static, and not read as a cross first and last. I mean, one can recognize it as a cross, but I like to do things to it visually, and make it appear either longer on one side or shorter on another. In other words, not square, not static. My whole enterprise is against static. I have this wonderful dealer in Sweden, who astonished me by saying that he liked my paintings best when he didn’t see the cross. They’re usually unsuccessful if that’s all you see, in your memory.

JT: Was it a stretch for you to make these shaped canvases?

HQ: No, I’d made shaped paintings for many years, and in some ways my square paintings always had a sense of the shape anyway. Sometimes the corners were notched out visually, and I was always tempted to do it literally. I always felt that parts of these rectangles and squares on a square canvas were about to slide off to the right or left, and now actually I could do it.
JT: What about the jump in scale?

HQ: I just leapt at the opportunity to get more assertive. The drawings are a little world one enters or doesn’t enter, but these paintings are something to confront -to experience – on what I hope is a generous scale.

JT: Do the crosses bear any strong at historical associations for you?

HQ: Not intentionally. As a matter of fact, when I started using it I was slightly nervous because of what you’re saying – the associations in 20th-century art history. The cross used abstractly is quite an image, free to roam and to become an emblem for abstract painting. But I don’t like to stake emblems. I like to make paintings.

This entry was posted in Interviews and tagged Harvet Quaytman, Kazimir Malevich, Maine College of Art. Bookmark the permalink.