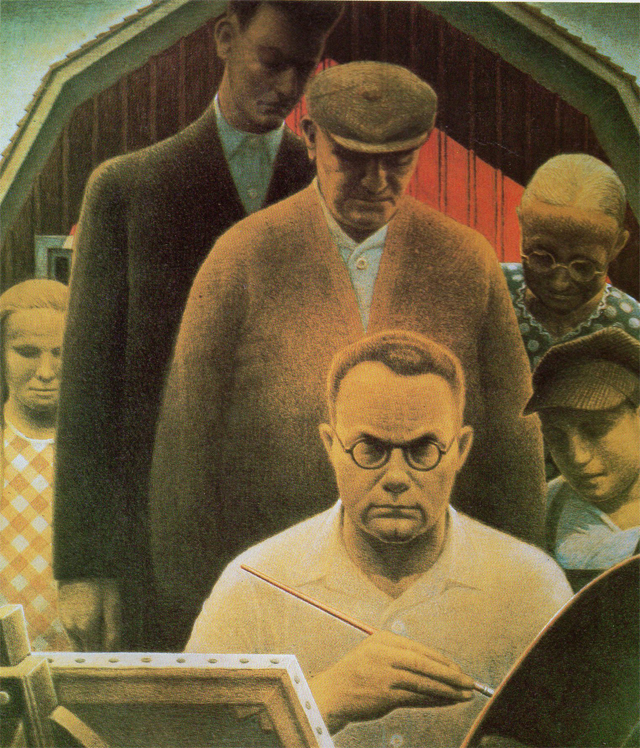 “Return from Bohemia” (1935, colored crayon, gouache, pencil on paper). In this self portriat, Grant Wood sits at his easel surrounded by American Gothic type characters like the ones that appear in many of his paintings. after four trips to Europe in the 1920’s, Wood settled in Iowa, developing his unique style. “American Gothic” painted five years earlier, propelled him to national attention. “Return from Bohemia” is also the title of his unpublished memoir.

A true regionalist, Grant Wood painted the people and landscapes of Iowa with meticulous accuracy, a dash of humor, and a touch of sentimentality.

“Spring Turning” oil on masonite, 1936. This landscape of tractors tilling fields in preparation of spring planting shows vividly Wood’s use of geometric shapes. The artist was well known, and his paintings were in great demand by the time he painted this.

“It’s good to have him chunky.  He’ll make a good farmer,” said his father when he was born.

Eager to try out the ideas he had been exposed to in Europe, Wood painted a startling portrait of his seventy-one-year-old mother in 1929, which he called Woman with Plants. She is holding a clay pot of the sword-shaped Sansevieria plant, a ﬂowering, tough-as-nails species, popular among frontier women of the plains. The brooched and aproned lady consumes the foreground with a wrinkled, Mona Lisa presence—a bedrock symbol of stability Grant Wood was still fiddling with his new style in Woman with Plants, and the uninspired landscape elements wilt under the weight of the mother.

Stone City, painted a year later, soared above the flattened landscape of Woman with Plants. Wood’s perspective rose like a hot-air balloon, delivering a breathtaking vista of the sculpted countryside. Stone City was in fact a bankrupt quarry town, and Wood painted the roller-coaster hills and trees that resembled helium-filled brussels sprouts in hypnotic rhythms. The modestly efficient windmills, the spic-and-span suspension bridge, and the freshly planted rows of corn ticktock with a master-watchmaker’s precision.

Wood also painted American Gothic in 1930, recruiting his sister Nan (then thirty), and his dentist, Dr B. H. McKeeby (age sixty-two), to pose. The two stand stiffly before their prim homestead, ready to take on all comers without budging an inch. The composition is a reﬂecting pool of vertical patterns, bouncing from the sun-glistening tines of the upright pitchfork to the scrubbed-out shine of the seams in the farmer’s faded overalls. A
Sunday preacher and his spinster daughter, they stare with mouths clamped tight as clams, eyes wide-open and wary. 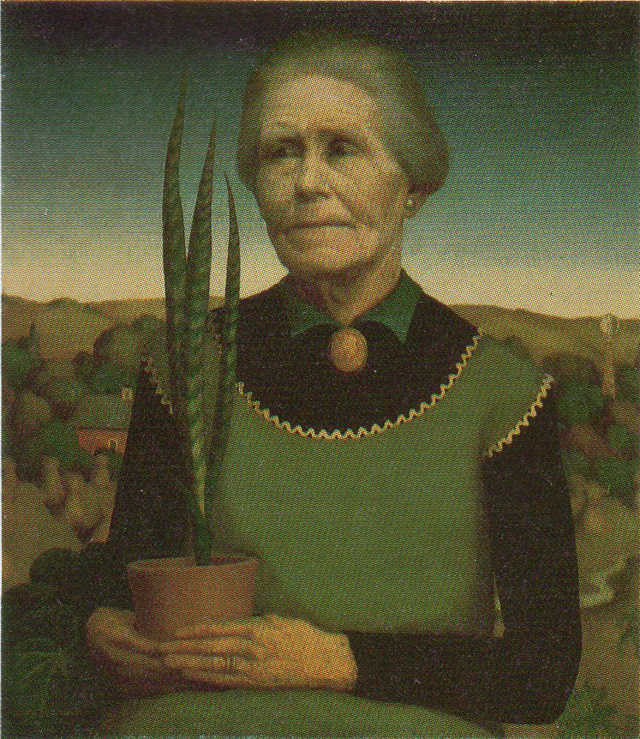 “Woman with Plants” (1929, oil on composition board). Wood was still developing his style when he painted this portrait of his seventy-one-year-old mother. The uninspired landscape elements wilt under the weight of the mother. She lived with him in his first studio in Cedar Rapids, Number Five Turner Alley (named for his first patron David Turner).

Despite four Bohemian forays to Europe in the 1920s, Wood remained a home-town artist, beloved in Cedar Rapids but obscure outside the manicured city limits. The Forty-third
Annual Exhibition of American Paintings and Sculpture at the Art Institute of Chicago in
1930 changed all that. After a considerable tussle in committee, American Gothic was not
only accepted for exhibition but also awarded the Norman W Harris bronze medal and the $300 prize. The painting of the scrawny couple with a pitchfork created a cross-country media sensation and punted the thirty-nine-year-old dimple-chinned artist to overnight fame.

Charles J Bulliet, a powerful art critic for the Chicago Daily News, proclaimed Grant Wood “the Iowa Moses come to lead American art out of the doldrums of foreign isms and
into something genuinely American.”

When the Des Moines Register reproduced American Gothic but erroneously captioned the picture “Iowa Farmer and Wife,” a salvo of incensed letters to the editor hit the state
capita1’s premier newspaper One published letter set the record straight: “When Mr
Wood asked me to pose for him,” wrote the un-spinsterish and marcel-waved Nan Wood
Graham, “he showed me some pictures of old Gothic stone carvings from a cathedral in France and asked if I could pull my face out long and look like some of the women in the
carvings. I told him some of my neighbors looked like that just naturally, but he explained that he couldn’t ask them to pose without hurting their feelings, so I gladly consented and still consider it a great honor.”

The electrifying success of American Gothic baffled Grant Wood, but his self-confidence
bloomed enough to write Juliana Force, the feisty director of the brand-new Whitney
Museum of American Art, then located on West Eighth Street in New York. In perfect-
penmanship script, Wood wrote, “I am working diligently, but paintings in the style of
American Gothic and Stone City necessarily take considerable time in the making.” To
illustrate his point, Wood shipped the fresh-off-the-easel Arnold Comes of Age and Stone
City to New York. A month passed before Force’s typewritten, single-spaced reply of
January 24, 1931, was received. “It is our unanimous opinion not to purchase them at
this time, but will consider again including one of your paintings in our collection. I am
returning the two pictures to you, express pre-paid. Thanking you again”

“It was just one of those things that happened,” mused Lloyd Goodrich, the eighty-
six-year-old director emeritus of the Whitney and widely published author of monographs
on great American artists. Goodrich was the museum’s research curator at the time of
Wood’s fizzled attempt to storm that citadel of art. “We didn’t go after Grant Wood,” Goodrich continued. “I know there was a low price on American Gothic back then, because the Art Institute grabbed it for $300.” To this day the Whitney Museum—the august repository of American scene painting—does not own a Grant Wood oil (they do have two studies of the dazzling triptych, Dinner for Threshers).

Unlike most of the artists of his day, Wood chose to paint in Iowa, not New York 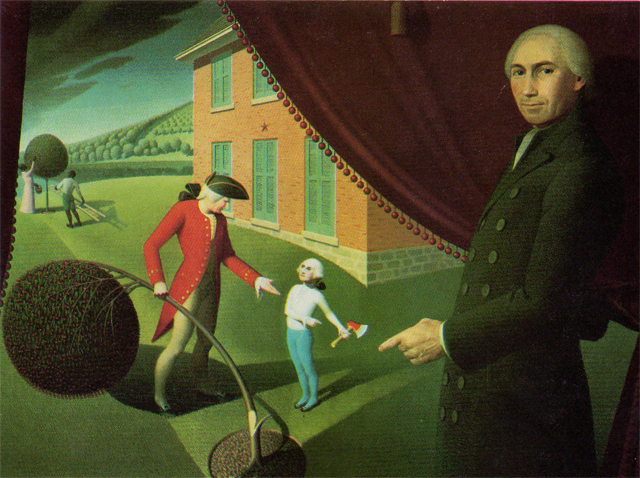 Parson Weems’ Fable (1939, oil on canvas). The age-old fable of George Washington chopping down the cherry tree is brought to life in this painting.

By the time Wood had a one-man show in New York at the Ferargil Gallery in the spring
of 1935, he had been showered with laurels, and his narrative imagery resonated his unique signature. The Roosevelt administration appointed him director of Iowa’s Public Works of Art Project that year, and he rode the college lecture circuit, trumpeting his “Revolt against the City” views, while still ﬁnding time to marry Sarah Maxon (whom he divorced in 1939) and to move from Cedar Rapids to Iowa City, where he joined the art faculty of the University of Iowa. Time magazine saluted his efforts by crowning him “chief philosopher and greatest teacher of representational U.S. art.” 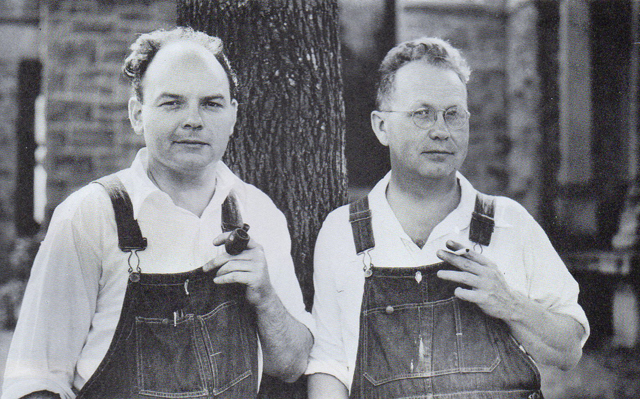 Among the Ferargil gems, the Birthplace of Herbert Hoover (1931) ﬂaunts Jay Sigmund’s
teetering clothesline of Iowa-blown laundry, and a silhouetted gentleman in the foreground points proudly to the quaint landmark. Daughters of Revolution (1932) plasters a sour-faced trio of prim, tea-sipping patriots in front of Emanuel Leutze’s legendary painting, George Washington Crossing the Delaware (1851). Return from Bohemia (1935) laid Wood’s regionalist cards on the table with a furrow-browed self-portrait, surrounded by an introspective cast of farmers. Wood was lambasted in the left-wing pages of The New Masses for depicting only “rich, prosperous farms” during a depression-era slew of farm foreclosures, and was chided by Lewis Mumford in The New Yorker for being “a national symbol for the patrioteers.” But his paintings continued to sell—to ﬁlm stars Edward G. Robinson and Katharine Hepburn, to Hollywood producer King Vidor and director George Cukor, to novelist John P Marquand, and to publisher/department-store heir Marshall Field III. Cole Porter bought the tire-screeching Death on Ridge Road (now in the collection of the Williams College Museum), and Mrs. Boyce Gooch of Memphis snared the klieg lighted Midnight Ride of Paul Revere (later sold to the Metropolitan Museum in 1950 for $15,000, now the only Wood painting in the collection of a New York museum).

Daughters of the Revolution (1932, oil on masonite panel). Wood takes a humorous look at these prim, tea sipping patriots.

After the mudslide of negative reviews from Wood’s Chicago memorial exhibit in 1942,
Gooch huffed in a letter to Art Digest that the critic “was deaf to Grant Wood’s rate of vibration.” She should have been commended for her sensitive ear Today, a major Grant Wood painting-—if one were on the market—would fetch from $300,000 to a million dollars. The prices on these rare commodities have escalated to the point that museums have pooled their purchase funds to share a single painting. For example, the Minneapolis Institute of Arts and the Des Moines Art Center recently acquired the Birthplace of Herbert Hoover from a private owner at a whopping $500,000. Adolescence, Wood’s masterfully humorous pencil drawing of a gangly rooster book-ended by a pair of plumply feathered hens, also sold recently at Christie’s auction house in New York for $130,000, setting a record for twentieth-century American drawings. 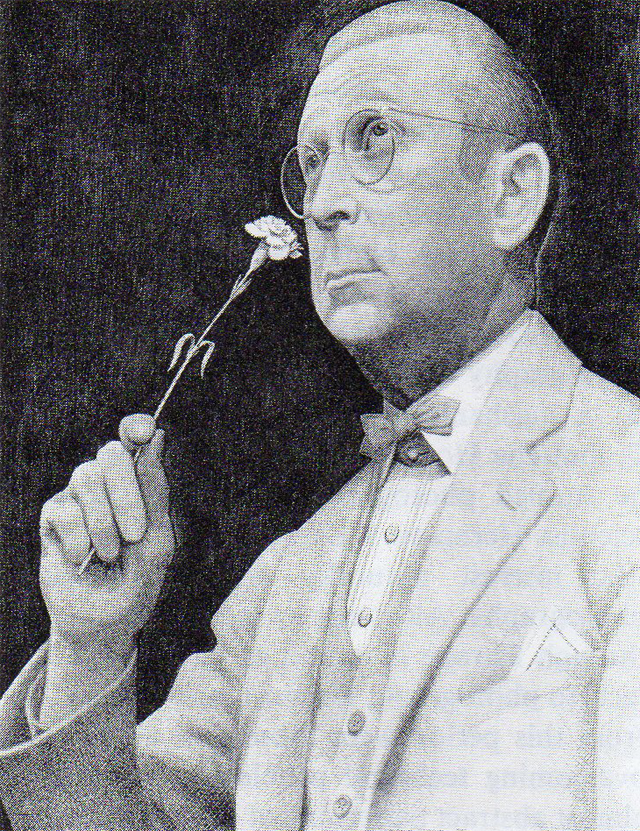 Grant Wood painted farmers behind horse drawn plows, while Enrico Fermi split the atom. He satirized the fables of Paul Revere’s ride and George Washington chopping down a cherry tree, while waves of avant-garde artists unloaded their easels in New York and
America prepared to dig out from her isolationist youth. Wood serenaded the public with his snake charmer’s gifts and carved a niche for his unique, deliciously homespun vision.

Long before historic preservation and American-folk-art collecting came into vogue,
Wood salted away an encyclopedia’s worth of American images—-from Currier and Ives
prints to Sears, Roebuck and Company mail-order catalogues—into his taut and maniacally detailed brush. His hand-ground blend of Quaker and Shaker tools and furniture, the patchwork quilts and tintype photographs, dripping with a Victorian chill, wended‘ their way into his hit parade of paintings. It is tragic that Wood died at fifty a victim of liver cancer He had stretched his boundless energy to the limits, with public speaking, teaching, and a prodigious series of book illustrations (including a stunning, limited-edition Main Street) and low-priced, mail-order lithographs printed by the Associated American Artists. But his easel paintings suffered, and even on his deathbed, in the Iowa City University Hospital, Wood stubbornly spoke of painting a companion piece to Woman with Plants, a long-planned homage to his father, Maryville.

Because of the delicate condition of the oil-on-masonite surfaces and the constant pres-
sure on museums (mostly in the Midwest) to display their Wood treasures, this new retro-
spective will more than likely be the last one of this century With the continuing ascent of
American painting, the pictures of Grant Wood should be savored and meditated upon
in this seemingly final journey.

This entry was posted in Criticism and tagged Grant Wood, Regionalist. Bookmark the permalink.