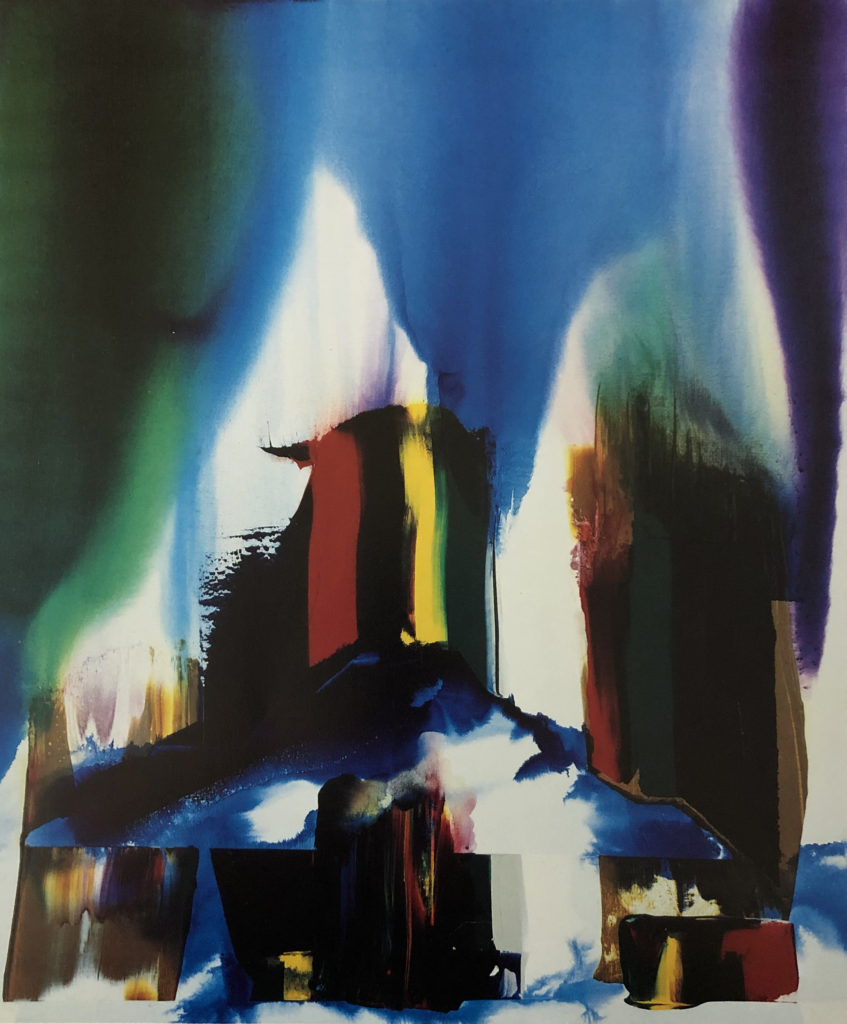 On a clear summer evening a few years ago during intermission of an off-off Broadway play, the name of which I have long since forgotten, I stepped onto the theatre terrace for some fresh air. A number of theater goers had the same idea. It was quite pleasant on this terrace, high over the street with a sweeping view of downtown Manhattan. The pleasant nocturne evaporated in an instant as a high-speed flash of light streaked across the moonlit sky. Projecting an extraordinary shade of green, the cube of color disappeared in an easterly arc. A blink of the eyelids would have missed this cosmic event. A chorus of oohs and aahs followed the tail of this comet (it was too early for Halley’s). But just what did I actually see? Something involving astrophysics or perhaps an extraterrestrial omen? I was not the only witness. The papers reported the phenomenon the next day . . . something about dust from a meteor shower but no precise explanation.

When I look at the paintings of Paul Jenkins—a series he calls “Broken Prisms”—that diaphanous cube of green light returns to me as vividly as the time I first saw it. Jenkins’ recent paintings form their own high-altitude windows of light. The spectrum of primary colors is captured and dispersed onto canvas. This amalgam of pigments flows and recedes in an alchemical, acrylic medium. The density of the colors, the way they cling like static to the canvas or build up on one another like adobe structures, serenade the eye.

Delacroix described color as the music of the eyes. Jenkins’ sonatas and lightning-fast scherzos transport the viewer. Perspective alters. The near recedes. The background tips forward. Not unlike Cezanne’s and Matisse’s architectonic space, Jenkins’ painted space paradoxically attracts and repels. The amber warning light inside the viewer’s metaphoric pinball machine flashes “Tilt.”

From the bank of studio skylights, a shard of light—as if shot from a bow—pierces the glass skin of the prism. Mounted on a miniature brass altar, the prism refracts the bull’s-eye of light and disperses the energy into a hovering spectrum an inch off the studio floor. The bands of color spin in space, breathing life into their barely separate auras. In a moment, an unseen cloud erases the choreography and the spell is broken. Propped up against pillars and walls, the paintings form a kind of Stonehenge pattern with the floor-bound prism taking center stage.

“Titles are painful to me,” says the artist. “They are meant to be identity words that will secure an attitude towards the painting rather than provoke a visual object that the eye will seek out.” Phenomena Burning Bridges launches a pall of violet black and princely blue down the north face of the canvas. Like powerful weather fronts, the forms chill the bony white surface and saturate the grain. As suddenly as they appear on the horizon, their progress is foiled by an inky veil rushing to intercept their advances. At the southern tip of this veiled front, a volcano of color erupts, flooding the terrain with wet bands of pigment. A soundtrack of exploding fireworks escalates the temperature and tension. The impastoed surface, locked within the rectangle, shivers from the heat.

A sky blue scroll of turquoise mist shimmers on a stage licked with white light in Phenomena Prism Sentinels. A regiment stands guard in loose ranks along the lower ledge of the canvas. Flickering curls of colored smoke drift up, tattooing the pristine white gesso with the memory of the prism. Incense feeds the air, stoked by the diamond tip of candlelight. The assembly of vertical forms radiates the atmosphere, inexorably entwined in reds, yellows and smoky black.

What the artist calls “optical ambiguity” plays a dominant role in the paintings. Horizon lines vanish. The foreground recedes or at least the appearance of background overshadows what is closest to us. In the same ore-rich vein, the viewer switches roles and steps into the picture. Audience and actor mime one another. Although abstract, a continuous landscape unfolds . . . not so much mountains and desert—though one can certainly feel the range in atmospheres—but a rugged patina of time sifts through the eternal hourglass. Crusts of past civilizations pose as geologic faults and cast visual spells. Central Park is not seen from Olmstead’s blueprint but landscaped by the Ice Age. Jenkins’ slowly turning kaleidoscope of textures requires an openness on the viewer’s part to stare stalwartly into the blue glass flame of pigment. 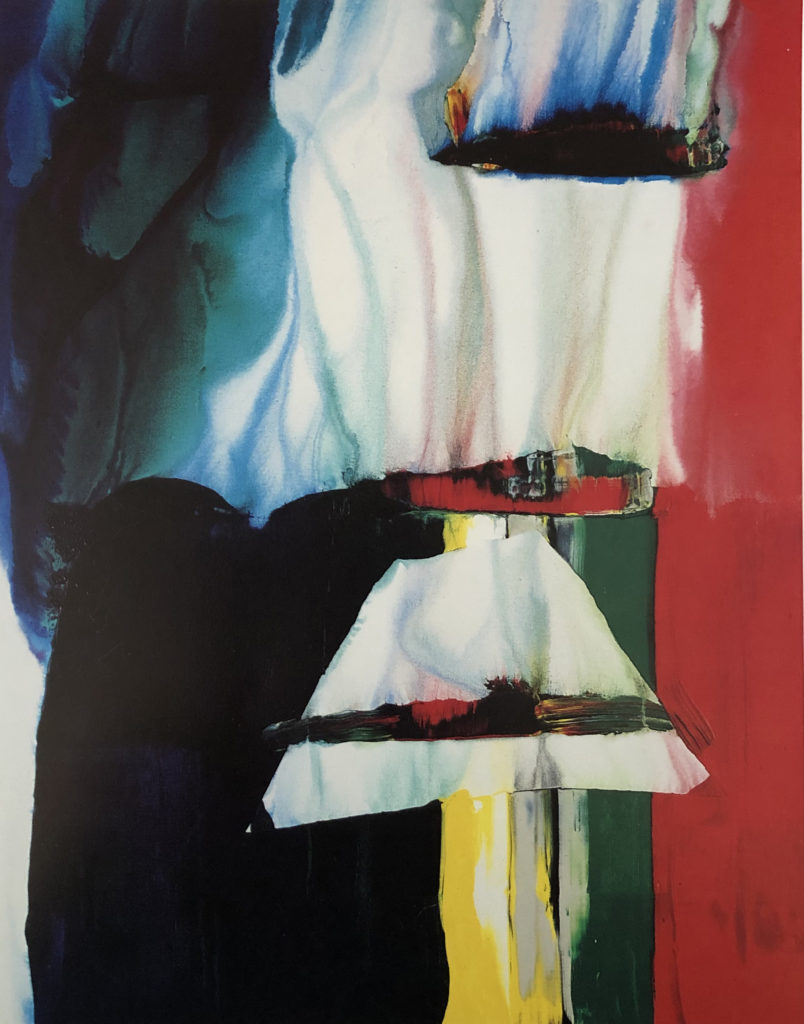 The gong sounds in Phenomena Chinese Anvil, breaking the reverie. Vibrations from its mellifluous voice animate the phantom veils as they pirouette in space. Colors rise like smoke from the chimney-topped forms, disintegrating into fine mists as they rise higher and higher. The dazzling intensity of the primary colors anchors the painting in a rising sea. Carved into this massive facade, a triangular shard of ice—just the tip of the iceberg—reflects the gypsy bands of color.

Newton’s crystal prism, Goethe’s color theory on the presentation of phenomena, Georges de la Tour’s obsession with candlelight, Gustave Moreau’s Merlin-like wands of color temper the blade of Jenkins approach. His oscillating line projects a cosmic calligraphy, melding the spirit of the scientific age with the mysticism of the Orient. Jenkins’ cauldron of inspiration is not without irony. The fascination he takes in antique optical instruments of light and Tibetan Tankas is ultimately metamorphosed in acrylic pigment, a medium he has worked with since 1960.

The white shards that appear in a number of the current paintings are sculpted from the negative space of the vertical bands of impastoed color. They exist as the air between the spokes of a wheel. These altered triangular slices, often with the tops sheared off, can represent a vessel or anvil to hold or refract the light. Some of the shapes resemble the contours of states or the folds of a tablecloth from one of Cezanne’s still lifes. They could also read as reflections of King Zoser’s step pyramid in Saqqara. In Jenkins’ ethereal vocabulary, the shard represents a mandala, a pathway to the center of the painting.

Phenomena Prism Chalice is an opera of flaming color. The descending rungs of blues, reds and yellows cascade like molten lava lakes, bubbling and popping with intense heat. Swirling eddies foam over scorched planks of green and violet hues. Defying gravity, this elaborate structure smokes and spews its gaseous exhaust of gemstone colors downward, singeing the white ground with a tattooist’s precision. Embedded deep in the structure, the white chalice feeds off the flames of light, injecting a calm amidst the chaos, and holds the viscous amalgam of the storm.

At times, Jenkins’ work seems powered by a Fauvist intensity. And his obsession with luminosity and pure prismatic color echoes the late-19th Century concerns of Paul Gauguin for simplicity fused with tension. High on Jenkins’ mantle is the touchstone of Matisse who, he says, “pursued simplicity to its in its primal necessity.” As Matisse himself said, “A work of art must carry in itself its complete significance and impose it upon the beholder even before he can identify the subject matter.”

The paintings move in extraordinary ways. As if perched from a crow’s nest deep in space, the artist composes a weather map of mists and gusts, veiling the ricocheting masses in a patina of dissonant sweeps of indigo and green. The battering arrays of warm and cool hues breathe into each other’s paths rivalling Turner’s tempestuous seas.

A jagged fault line runs through Phenomena Region of Prism Winds. New boundaries are drawn by the rumbling upheaval and the upright towers of colors pitch forward, straining to catch their reflection. Vapory trails of rainbow winds race to the upper reaches of the canvas. The turbulent sensation of the jet stream’s thrust rocks the center of the painting. The lower region corrals the glowing shard, somewhat disguised behind a blue-black veil. The ferocity of the struggle pushes the paint to the breaking point. Bulging veins of red pigment strain the stretchers and threaten to implode.

Returning to that terrace high over Manhattan, the moonlit sky frames the streaking tail of the colored cube. Breaths are drawn in. Eyes widen in wonder. Enveloped in silence the voice of the artist chimes low and deep: “Was not a painter then another kind of alchemist who would come and go and leave behind traces of what he discovered. …” The celestial apparition vanishes in the blue-black night.

This entry was posted in Criticism and tagged Paul Jenkins. Bookmark the permalink.