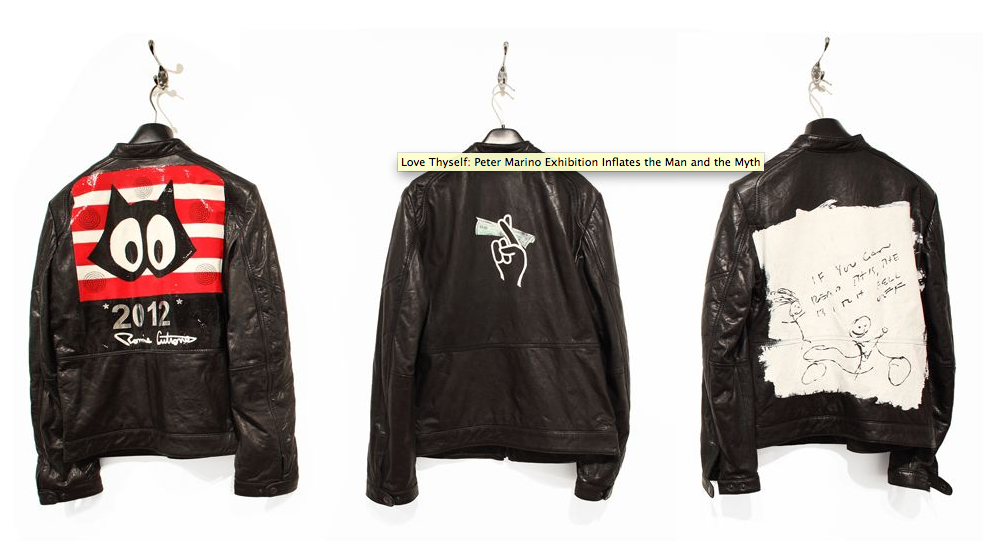 (l-r) Leather jackets by Ronnie Cutrone, Lee Quinones, and Nate Lowman, all from 2010, are on view in the “One Way: Peter Marino” exhibition at the Bass Museum of Art. (Courtesy Of The Andy Warhol Museum, Pittsburgh)

If you desire a strong dose of unadulterated self adulation encased in a museum setting resembling an archaeological excavation of decaying hubris, the Bass Museum of Art’s current exhibition, “One Way: Peter Marino,” fills that prescription.

Rarely has this viewer seen a more vile representation of one individual’s many accomplishments — that of the architect, designer, art collector, and opera producer — who favors fetish like black leather biker togs over Armani.

If you haven’t already guessed, Marino has been a major client of the above named galleries, and no doubt others, in his extensive gathering of multiple works by Andy Warhol, Richard Serra, Christopher Wool, Damien Hirst, Robert Mapplethorpe, Richard Prince, Georg Baselitz, and Anselm Kiefer, to name just a giant handful.

That list is impressive in itself, but when the works are hung like wallpaper backdrops as they are along the low-lit walls in the ramp-like entryway to the Bass’s main exhibition rooms, they pale to the collector’s un-caged ego. It would be fun to get the reaction of Richard Serra, seeing one of his black paintings on paper hung bumper to bumper to a Richard Prince joke painting. 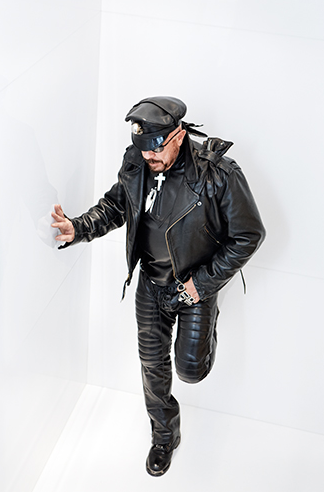 There are also multiple depictions in various media of Marino by a number of artists including Francesco Clemente, Lee Quinones, Ronnie Cutrone, Nate Lowman, and Wim Delvoye. If that isn’t enough, many of the exhibition walls are covered, curtain-like, with black unspooled strips of videotape apparently comprised of various interviews with the great man, whose claustrophobic presence in the exhibition is chokingly ever present.

If this was a show dedicated to Leonardo da Vinci one could easily stand it, but the Florida state and city funded Bass has taken a greedy turn to temporarily housing this mincing homage to Marino. The exhibition in part brings to mind “The Art of the Motorcycle” exhibition at the Guggenheim Museum in 1998 that was sponsored by BMW and caused then director Thomas Krens, a BMW riding enthusiast, much media grief.

Still, if you can cruise past some of the more ridiculous design elements of the exhibition, which includes a room or two of Marino’s prodigious output in designing luxury shops for luxury brands (Fendi, Graff, Chanel, Bulgari, Armani, Louis Vuitton, and so on) from Hong Kong and Shanghai to the Ginza and Beverly Hills, there are some swell art works to admire. That would include some 40 Robert Mapplethorpe black and white photographs of subjects ranging from cocks and orchids to studies of body builder Lisa Lyon, as well as Andy Warhol’s serial image “Avanti Cars,” from 1962.

One can also take in the leather lined walls and various Marino-designed bronze boxes and bronze commodes that show yet another side of the idiosyncratic and wildly successful designer/collector.

This entry was posted in Criticism and tagged Bass Museum of Art, collections, Peter Marino. Bookmark the permalink.