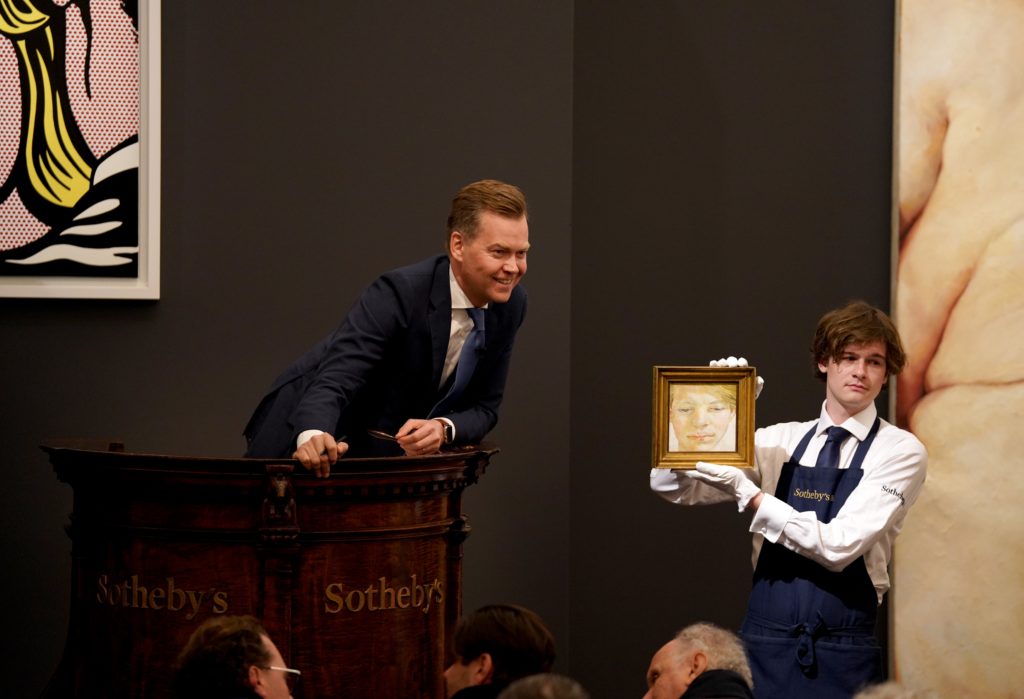 The image of smiling Auctioneer Oliver Barker the Lucian Freud “Head of a Boy” held by a white gloved attendant at his left side which fetched £5.7 million.

Only six of the 66 lots offered failed to sell for a crisp buy-in rate by lot of 9 percent.

At least 26 of the 60 lots that sold, including most of the top lots, came to market backed by financial guarantees, either in the form of outright guarantees by Sotheby’s or in combination with anonymous third parties (coined “irrevocable bids” by the auction house) that receive a financing fee for their troubles.

The numbering is tricky since a number of the deals are made at the 11th hour, long after the auction catalogue has gone to press with the various guarantee symbols telegraphing those lots.

Sotheby’s buyer’s premium currently is the highest in the industry.

It last sold at Christie’s London in February 2009 for £457,250 and this time round came backed by a third party “irrevocable bid.”

Women artists were much in evidence in Sotheby’s line-up, with 13 making the evening cut, a record in itself, according to the auction house.

The seller acquired the then primary market work from Pace Gallery in 1995, a time when it was known as Pace Wildenstein.

It was acquired by the late seller, the Honorable Garech Browne, the same year it was painted.

It sure helps to get in the game early!

Apart from the Tan entries, Basquiat also took away the top lot with another late work, “Apex” from 1986 and executed in acrylic, oilstick, and Xerox collage on canvas and depicting a fierce looking, dreadlock coifed figure as well a skeleton scull that attracted at least a trio of bidders and sold to the telephone for £8,227,950/$10,843,615 (est. £5-7 million).

It was also backed by an irrevocable bid and did surprisingly well given that late Basquiats (the artist died in 1988) are usually considered worn-out and overly drug freighted.

On a New Yorker note, storied fashion designer Marc Jacobs sold off a small trove of works, all of them backed by guarantees, including [lot 42] Gerhard Richter’s blurry, photo-realist composition, “Sabelantilope (Sable Antelope)” from 1966 and executed in oil on canvas that sold to a telephone bidder for £1,215,000/$1,601,248 (est. £1-1.5 million).

The evening action resumes on Wednesday at Christie’s Post-War and Contemporary Art auction.