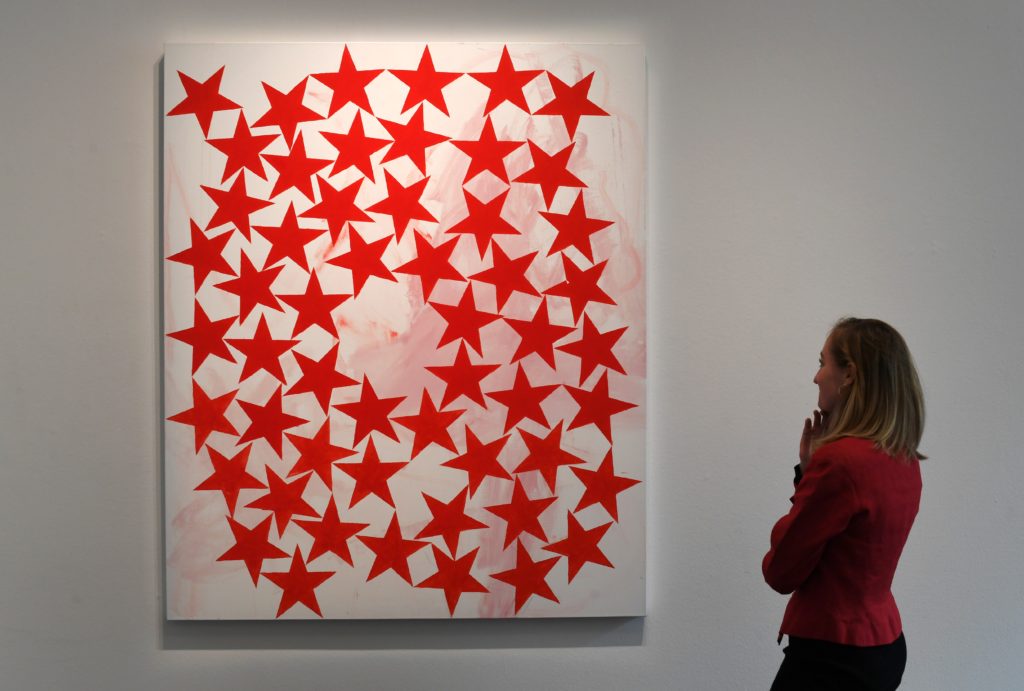 Only four of the 42 lots offered failed to sell for a svelte buy-in rate by lot of 10 percent.

No doubt, the sale was bolstered by an assortment of guarantees, both so-called ‘irrevocable bids’ sometimes partnered with Sotheby’s in-house guarantees.
There were, at least, fourteen such financial deals, mostly transacted for top lot entries, that assured an offering would sell no matter what happened in the sales room.

That said, it easily beat arch-rival Christie’s £45.1/$57.5 million evening sale in the same category on Tuesday.

It was Christie’s first London evening sale in Post-War/Contemporary Art since June 2016 when it registered a £39.5 million total and subsequently took a three year break.

Those high achiever lots, sparked by multiple bidders from a slew of countries, continued with Albert Oehlen’s large-scaled and bare-chested “Self-Portrait with Empty Hands” in oil and acrylic on canvas from 1998 and never before offered at auction, that shot to a record £5,949,950 / $7,542,157 (est. £4-6 million).

Though it was a relatively tame evening compared to a year ago, buyer hunger was easily evident as was the case for Robert Ryman’s petite yet intensely worked “Untitled #32” from 1963 and scaled at just 7 ½ by 7 5/8 inches in oil on unstretched sized linen canvas that raced to an estimate busting £850,000 hammer (est. £400-600,000).

That said and oddly so, the same painting sold at Christie’s Paris in October 2017 for €931,500, when the seminal artist was still with us. He died earlier this year. 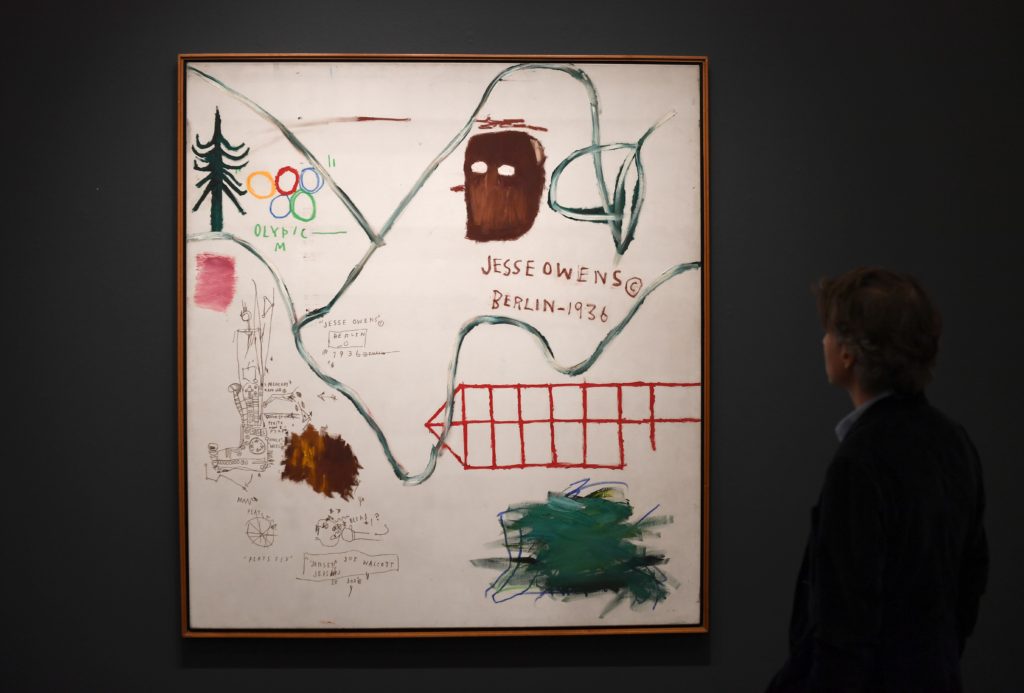 One of the few casualties, and a Jean-Michel Basquiat painting, no less, was the artist’s seemingly impressive composition in acrylic and oilstick on canvas from 1984, “Big Snow,” featuring in part the vague visage of track star Jesse Owens and a Basquiat lettered ‘Berlin-1936’ description on the canvas that failed to sell at a chandelier bid £2.8 million (est. £3.5-4.5 million).

In terms of comparable values, the royal like cover lot, Francis Bacon’s searing “Self-Portrait” from 1975 and measuring 14 by 12 power-packed inches, and painted shortly after the artist’s former lover and muse George Dyer died, sold to a another anonymous telephone bidder for £16,542,650/$21 million (est. £15-20 million).

It was backed by a so-called irrevocable bid (or third party) bid that guaranteed it would sell not matter what happened live in the auction room.

It last sold at Sotheby’s London in July 2015 to the current seller for an almost identical (given the four year span and the relevant inflation as well as pre-BREXIT price of £15,269,000/$23.8 million.

The oil and Letraset on canvas, including the illegible transfer lettering streaming across the bottom of the picture, was, still and all, the outstanding work of art offered in the London season.

The previous record was set the last time the painting appeared at auction, in March 1984 at Sotheby’s London when it made £120,000.

Wols (Alfred Otto Wolfgang Schulze), is an extremely rarified artist, who died at the tender age of 38 from a bout of food poisoning in 1951. He entire oeuvre consists of some 80 paintings.

Heinrich Hohenlohe, of Hohenlohe Fine Art, a Berlin based private art dealer was the underbidder, or so it seemed among that scrum.

“It was probably one of the best of its kind ever offered at auction and is very rare,” said the dealer in an after-sale conversation. “I was surprised by the deep reservoir of bidding but then again, the painting was severely under-estimated and it enticed people to create that auction magic.”

The contemporary evening art season resumes for a final performance at Phillips on Thursday.