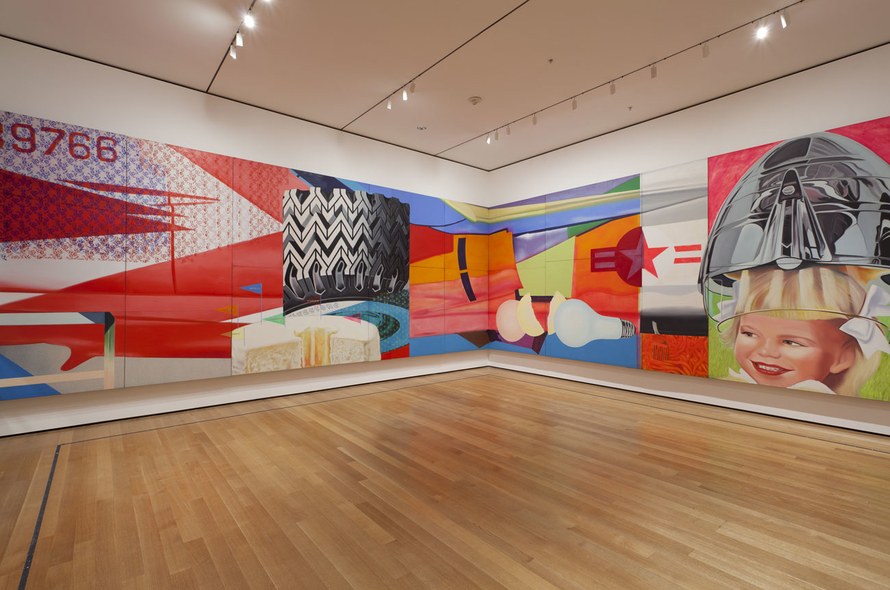 James Rosenquist, a titan of the Pop Art movement, died in New York on Friday at age 83 after a lengthy illness.

Rosenquist loomed large in my early career as an art market journalist when his masterwork “F-111” from the Robert Scull collection came up at auction at Sotheby’s New York in November 1986.

Not only was the artist’s patrician dealer Leo Castelli in the York Avenue salesroom but Rosenquist was also on hand to watch the bidding fireworks as “F-111” set an auction record.

Always plain-spoken and disarmingly friendly, the artist post-sale told this reporter, “Sixty thousand was the asking price” (when it was first shown at Castelli in 1965), “but Scull paid $45,000 (with a discount). It was a very brave thing for Scull to do. He almost deserved to have it for nothing.”

Fast-Forward to 1994 and the celebratory exhibition/publication of “James Rosenquist-The Big Paintings, Thirty Years at Leo Castelli,” I was surprised and pleased to see the reproduction of my Washington Post auction story on the Scull sale and “F-11” splayed across a large-format page.

Contemporary art from the estate of the late collector extraordinaire Robert C. Scull racked up $ 7,924,125 in sales tonight at Sotheby’s, breaking nine individual records, including the topper, James Rosenquist’s 86-foot-long “F-111,” which was sold to an anonymous buyer for $ 2.09 million. “F-111” is currently on view in Washington at the National Museum of American Art.

After the sale, an outwardly calm Rosenquist said, “I’m still numb but I do know one thing. I never signed the picture. Maybe I will now for a million.”

He continued: “I was very surprised to see it go to $ 1.9 million [the hammer price before the 10 percent buyer’s premium was added]. I thought it would make 1 million. I was at the first Scull sale 13 years ago at Sotheby’s, but that time I hid out.” The artist said his share was $ 22,500 when dealer Leo Castelli sold the painting to Robert Scull in 1965.

Castelli, Rosenquist’s longtime dealer, said, “I’m so happy it got sold,” and then added, “but I’m not happy the Whitney didn’t get it. Citibank got it for an unspecified client. It’s a pity. Tom Armstrong [director of the Whitney Museum of American Art] — I understand he went up to $ 1.5 million. I didn’t expect it to get that much. It is a very cumbersome painting.” Recalling his showing of the work in 1965, he said, “It went all around the gallery. Sixty thousand was the asking price, but Scull paid $ 45,000 [with a discount]. It was a very brave thing for Scull to do. He almost deserved to have it for nothing.”

The last lot of the evening, Jasper Johns’ “Double Flag,” sold for $ 1.76 million, which was something of a letdown after the $ 3.63 million — a record for a work of contemporary art — that was paid for Johns’ “Out the Window” Monday night. But Johns did set another record tonight: The $ 880,000 price tag for his “0 Through 9” was a record for any contemporary drawing sold at auction, besting the day-old record for the artist’s “Small Black Target.” 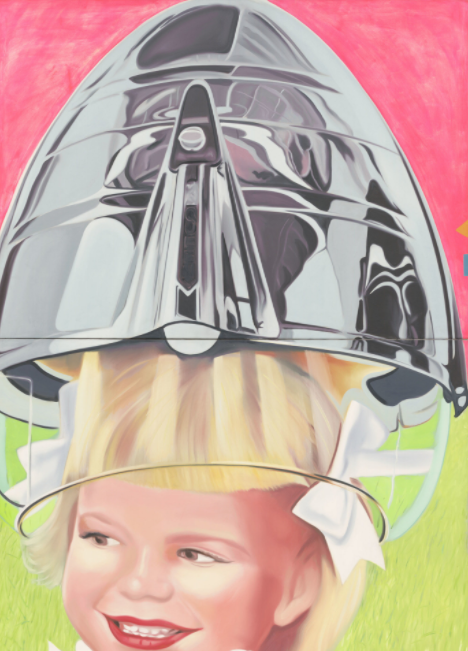 In Part 2 of the Contemporary Art sale this morning at Sotheby’s, sales totaled $ 2,765,345. Six lots, all small works by Arshile Gorky and John Graham, sold by order of the trustees of the Hirshhorn Museum and Sculpture Garden to benefit the museum’s acquisitions program, brought $ 139,800.

The final 88 lots of the Scull sale will go on the block Wednesday morning.

Richard Bellamy, proprietor of the Oil and Steel Gallery, a massive industrial hangar alongside a riverfront pier in Long Island City, back in the 1960s ran the Green Gallery, an avant-garde spot for pop and abstract art bankrolled by Robert Scull. “I had left Martha Jackson’s [the gallery] — I was probably the only person who never sold anything there when it was really hot — and Ivan Karp [Leo Castelli’s original right-hand man before he went off on his own to open O.K. Harris in SoHo] arranged my meeting with Scull,” he recalls. “Scull had told Ivan he wanted to open a gallery. Scull gave me absolutely free rein.”

Bellamy remembers going down with Scull to the Johns studio on Coenties Slip (now a skyscrapered annex to Wall Street) when Scull picked out a couple of paintings before they went to Castelli’s for his first show. Burton Tremaine, another major collector of pop art, had also visited. Tremaine bought Johns’ “Three Flags” for $ 900 in 1958. In 1980 he sold it to the Whitney Museum of American Art for a reported $ 1 million. The work is reminiscent of “Double Flag,” which was sold tonight.

“Scull’s instincts were good,” Bellamy said. “He had a pretty good eye and his choices were indeed individual choices determined by himself. He had a lot of confidence. Each of us has a drive to affirm our choices about an artist. With Scull, he wanted his choices talked about and reproduced in the magazines. He was a little bit wiser than most.”

Bellamy still represents some of the artists from the Green Gallery days, including Mark di Suvero, whose “Che Faro Senza Eurydice,” a weathered timber sculpture with rope and nails completed in 1959, sold tonight for $ 319,000. That was a record for the artist, whose previous high at auction was $ 38,000.

In his autobiography, “Popism — the Warhol 60’s,” the artist tells a tantalizing tale about Rosenquist’s “F-111” and how Scull and then-director of the Metropolitan Museum Thomas Hoving (now the publisher of Connoisseur magazine) plotted in February 1968 to hang the huge picture at the Met while the curator of 20th-century art, Henry Geldzahler, was on vacation. The plan was to put the multipaneled painting, done billboard style in equal-sized sections, alongside the Met’s iconic and realistic wonder, “Washington Crossing the Delaware,” by Emanuel Leutz. Geldzahler became furious and resigned in protest, only to be reinstated after extracting some concessions of departmental autonomy from Hoving.

“F-111’s” new owner cannot take possession until the exhibition “James Rosenquist: Paintings 1961-85” ends its stay in Washington on Jan. 11. According to the auction catalogue, Scull bought the picture on the last day of its show at Castelli in 1965. It was about to be dismantled and distributed to individual buyers. The painting is a wondrous antiwar statement completed in 1964 at the beginning of the escalation of the Vietnam war. Against the unlikely montage of a young blond girl under a hair dryer, the U.S. Air Force logo continues into a yellow-red field of an erupting mushroom cloud that is shaded by a beach umbrella. The red-tipped nose of the gigantic fighter-bomber pierces in jarring close-up a plate of spaghetti in tomato sauce.