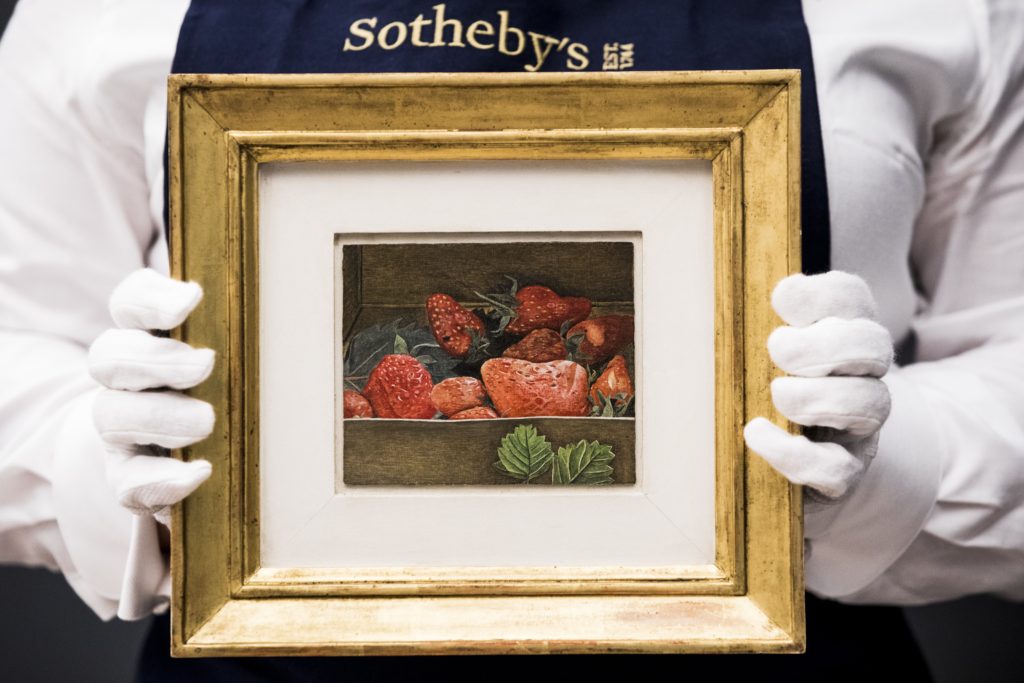 LONDON, ENGLAND – JUNE 15: Lucian Freud’s Strawberries (estimate £550,000 – £750,000) goes on view at Sotheby’s on June 15, 2017 in London, England. The work is one of the highlights of Sotheby’s first ever Deceptively Small Scale ‘Actual Size’ and Impressionist and Modern Art Evening Sale, which are set to make over £170 million at auction on 21st of June 2017. (Photo by Tristan Fewings/Getty Images for Sotheby’s)

Wassily Kandinsky and Joan Miro stole most of the brief market thunder at Sotheby’s £128 million Impressionist & Modern evening sale in London on Wednesday, stealing the limelight from the firm’s 35 lot “Actual Size” one-off sale that immediately preceded that action.

Billed as “a curated evening sale,” the results didn’t match the marketing fanfare with 12 of the 35 petite scaled lots offered failing to sell for a chunky buy-in rate of 34.3 percent and a £20.9/$26.4 million tally.

The result, including fees, barely hurdled the £19.3-27.9/$24.9-36.1 million pre-sale estimate, figures that don’t include the tacked on buyer’s premium for each lot sold.

The big casualty of the evening was Paul Cezanne’s rare to market watercolor and pencil on paper, “Baigneuses, La Montagne Sainte Victorie au fond” from circa 1902-06 that failed to elicit any bids against the ambitious £4-6/$5.18-7.7 million estimate.

It seems clear from the overall result that Sotheby’s tried hard to bulk up its lone evening Impressionist & Modern sale of just 23 lots with a tasty tray of appetizers but the appetite appeared rather fickle.