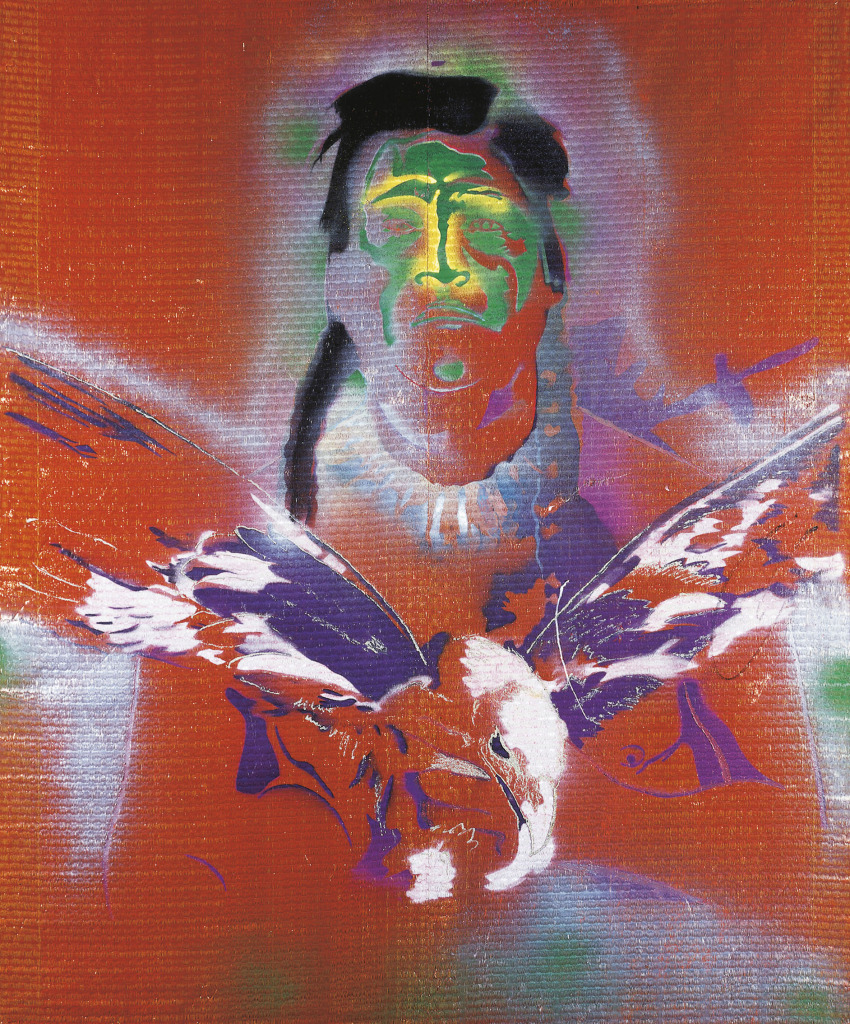 The fusillade of art market driven events has hit London again as the Frieze Art Fair and Frieze Masters take over Regent’s Park (through October 18) and a spate of auctions in Mayfair make for serial opportunities of art buying.

One wonders if Richter’s titanic market has sprung a leak.

Dealer David Nahmad was part of the posse of underbidders

Polke is on a posthumous roll with a big retrospective at Tate Modern and multiple examples of his works on display at Frieze Masters.

It was interesting to observe the parade of mostly German works assembled by Agnes and Karlheinz Essl over decades and housed in the couple’s eponymous museum in Klosterneuburg Austria, come to market and dispersed as part of a complex settlement of the couple’s ruined financial empire.

Paris/Salzburg dealer Thaddaeus Ropac who acquired several works during the evening, including Georg Baselitz’s “Trauerseeschwalbe (Black Tern)” from 1972 for £482,500/$775,378 and underbid others, said, “these are the crown jewels of the collection.”

The dealer, who sold many works to the couple on the primary market added, “he lost his company but he kept his soul in the museum.”

Apparently, prior to the Christie’s deal which carried a financial guarantee, Essl had offered his entire, 7,000 strong collection to the Austrian State for $100 million but that was turned down.

In a post-sale transaction, according to Christie’s president Jussi Pylkkanen, the house sold the spurned Richter abstract for £5.5 million net, recouping it would seem the firm’s loss from the guarantee.

Pylkkanen appraised the evening as “predictable and measured.”

The appetite for Polke appeared unabated at Frieze Masters on Tuesday (the 14th) as the hallucinatory abstraction, “Lapplandische Reise (Lapand Journey Journey II)” from 1984 in lacquer on fabric and scaled at 79 ¼ by 98 15/16 sell for an undisclosed price, though one would guess in the low seven figures.

The gallery also sold a stunning Jan Schoonhoven wall relief, “Thin Ridge” from 1965 in painted cardboard relief on board and in artist’s frame, again for an undisclosed price.

Schoonhoven is a so far underknown star of the Zero Group, currently featured in the Guggenheim’s long awaited exhibition.

A spokesperson for Zwirner said the gallery had sold some 11 works during the first day of Frieze Masters for a total of $6.1 million but wasn’t releasing any breakdown of specific, secondary market works due to requests from consignors.

There were some other big transactions realized during the opening hours of Frieze Masters, as one of David Smith’s imposing and totem like steel “Forging” sculptures from 1955 sold at New York’s Mnuchin Gallery in a solo artist presentation to an American collector for $2.4 million.

Though it didn’t sell until the second day, keen interest was observed for Andy Warhol’s “The Scream (After Edvard Munch)” from 1984, as it was scrutinized by a small group of Asian tire kickers at New York/London Skarstedt Gallery. The 52 by 38 inch synthetic polymer paint and silkscreen interpretation of Munch’s most famous painting, sold in the region of $5.5 million.

There was also some early, seven-figure action at Frieze Art Fair, the original fair devoted to primary market contemporary art and created by magazine founders Amanda Sharp and Matthew Slotover in 2003.

This round, London’s White Cube sold David Hammons’ found object sculpture, “which Mike do you want to be like…?” from 2001, consisting of three freestanding electric microphones for $4 million.

Hammons is also the subject of White Cube’s extraordinary solo at Masons Yard (through January 3), the artist’s first major gallery show in London, where Hammons has altered the lower floor of the posh gallery to make it look like an industrial space, one dominated by a group of tarp paintings and a tiny but choice Agnes Martin painting chosen to accompany the bewitching alteration by Hammons.

Back at the fair, White Cube also sold a relatively early Damien Hirst double-vitrine, “Because I can’t have you, I want you,” from 1993 in melamine, glass, Perspex, fish and formaldehyde solution for £4 million.

The title could be the war cry for the current market.

At London’s Victoria Miro, Chris Ofili’s ravishing oil on linen painting, “Ritual & Resitance (Desire)” from 2009 and grandly scaled at 122 ¼ by 79 inches, sold in the opening moments for a mid, six-figure £ price as it was apparently chased by at least four potential buyers.

Ofili’s first U.S. survey show is about to open at New York’s New Museum and a recent New Yorker profile has buzzed up interest in the one-time YBA star.

Though both bespoke tents at Regent’s Park are dedicated to commerce, an extraordinary installation at London’s Helly Nahmad at Frieze Masters is the takeaway experience of the young season.

In a budget is no object presentation, the gallery created “The Collector,” a jam-packed apartment of a fictional character, named Corrado N., set in Paris in circa 1968, and literally stuffed with books, periodicals, period furniture, knick-knacks and almost invisible mid-century art works by the likes of Giacometti, Picasso, Schwitters, Fontana, and Dubuffet.

While there’s no sign of Corrado, a quiet stock trader type from Milan who spent his earnings on art, the installation is an unadvertised homage to the family’s recently deceased and revered mastermind of their art business, Joe Nahmad, the namesake of the young and living New York dealer Joe Nahmad.

The filmmaker Robin Brown was the lead talent in pulling together this cinematic like time capsule of a pre-art fair era collector extraordinaire.

The rain drenched spectacle as it were moved to Phillips at Berkeley Square on Wednesday evening, showing off the firm’s gorgeous and state-of-the-art facility in Mayfair.

Though the crowd was heaving and easily twice the size of what they would have drawn at Howick Place, their previous address, the actual results were rather ho-hum at £14,862,500/$23,631,375.

Thirty-seven of the 46 lots offered came out to a buy-in rate by lot of 20 percent, not exactly scintillating.

Still, it didn’t help that the Andy Warhol dark cover lot, “Four Marilyns (Reversal Series)” from 1986 failed to sell at expectations of £1.2-1.8 million and that two other Warhols also hit the dust, as well as a small- scaled Gerhard Richter abstraction, “U.L,” from 1985 that was pegged at £1.5-2 million. It didn’t get past the £1 million mark.

That said, the evening generated some bidding drama as the guaranteed Tauba Auerbach abstraction, “Untitled (Fold)” painting from 2010 sold for a record £1,142,500/$1,816,575 to London dealer Inigo Philbrick.  Philbrick is currently showing “Progressions: Tauba Auerbach & R.H Quaytman” at his 89 Mount Street space through December 12.

“It’s one of the top ten paintings she’s made in her career,” said the dealer after the sale, “and I was willing to go a lot higher.” 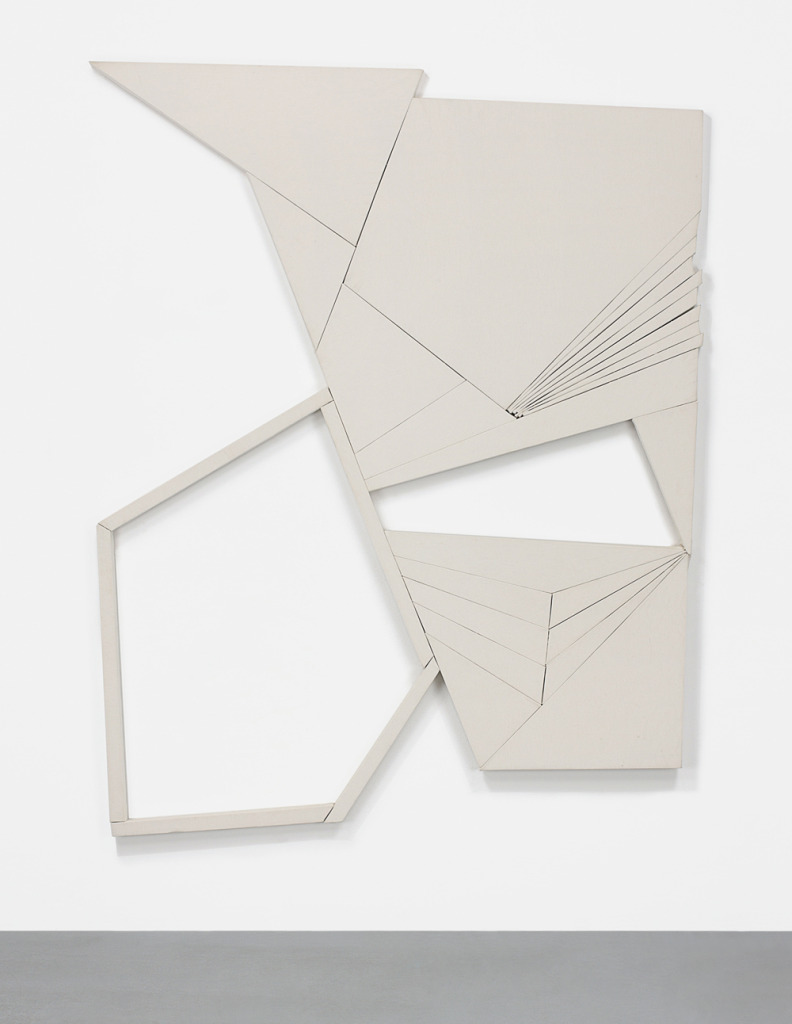 It last sold at Phillips de Pury & Company in March 2008 to the late collector and dealer Gordon Lockley for $121,000.

The auction action continues at Christie’s Thursday evening, not in time for the posting of this London letter.