In an almost sacrilegious move, Christie’s will be offering the only known Leonardo da Vinci painting still in private hands at its November 15 Post-War and Contemporary Art evening sale with an estimate in the region of $100 million.

“Salvator Mundi,” the circa 1500’s painting executed in the same period as the master’s “Mona Lisa,” depicts the bejeweled and long tressed Jesus Christ as the savior of the world.

The 25 7/8 by 18 inch oil on panel is an extraordinary image, with the elaborately dressed Christ half-figure lifting his right hand in benediction as his left palms a glass globe.

Once in the Royal collection of King Charles and thought to have hung in the private chambers of Henrietta Maria, the wife of King Charles I, the painting basically disappeared after a sale in 1763 by the illegitimate son of the Duke of Buckingham.

It next appeared in 1900, identified as a work by Leonardo’s follower, Bernadino Luini and then disappeared again until 1958, by this time clumsily over painted and shorn of any Royal provenance when it sold at Sotheby’s London for £45, again with an attribution as a follower of Leonardo.

After a subsequent American estate sale at a small auction house in 2005 the painting was subjected to rounds of intense scholarly study and came out in 2011 as an authentic and fully vetted Leonardo in the National Gallery of Art London blockbuster, “Leonardo da Vinci: Painter at the Court of Milan.“ 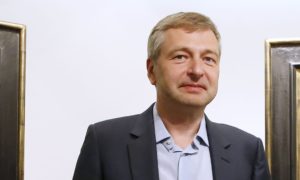 The newish owner and seller of the Leonardo is understood to be the Russian billionaire Dmitry Rybolovlev, currently embroiled in a multi-venue lawsuit with his former Swiss art adviser Yves Bouvier.

Rybolovlev has become in recent seasons a frequent seller at auction, always anonymously, as is the case here at Christie’s which has not identified the seller, dispatching works at auction for a fraction of what he originally paid for them.

The Leonardo may become an exception to that recent rule.

“The Salvator Mundi is the Holy Grail of old master paintings,” said Alan Wintermute, senior specialist, Old Master Paintings at Christie’s, as the Leonardo was previewed by journalists at the firm’s Rockefeller Center headquarters, just hours before it departed for a world tour starting in Hong Kong.

Instead of appearing as the star lot in an Old Masters’ evening sale, as one would expect, Christie’s launches “Salvator Mundi” in its Post-War & Contemporary, alongside a 20th Century blockbuster, Andy Warhol’s mural scaled, black and white “Sixty Last Suppers” from 1986, estimated in the region of $50 million.

Like the Leonardo, the Warhol is backed by a third party guarantee.

Warhol made over 100 renditions of Leonardo’s Last Supper, an idea suggested by the late and legendary New York art dealer Alexander Iolas in 1984, who was well aware of Warhol’s devout Roman Catholic ways.

Ironically or not, Warhol died barely a year after completing the painting in February 1987 at age 58 following routine gall bladder surgery.

Leonardo also played a big part in Warhol’s early career with the artist’s various iterations of Mona Lisa, in black and white and in color, including “Thirty are Better than One” from 1963, now in the Brant Foundation in Greenwich.

Twenty-two of Warhol’s Last Supper paintings were exhibited in 1986 in Milan, Italy, in a space directly across the street from the Santa Maria delle Grazie church, where the original lives.

Leonardo’s Mona Lisa, in fact, bears in ways a strong resemblance to the feminine, almost androgynous features of “Salvator Mundi.”

Pairing the Leonardo and Warhol is a cheeky move, though not surprising in that it was brainstormed by Loic Gouzer, Christie’s chairman of Post-War and Contemporary Art, New York, already storied for coming up with quirky and wildly successful, one-off auction formats.

“You know how we like to shake things up,” said Gouzer as the two works were temporarily unveiled at Christie’s, “Da Vinci is Pop Culture and it goes way beyond an old dusty museum. He was a rock star and to show Old Master paintings in a different light is exciting.”

Gouzer said it took six months to convince the anonymous seller to place the painting, which is already backed by a third party guarantee, meaning it will definitely sell on November 15, no matter what, in the firm’s Post-War & Contemporary evening sale.

When asked who might step up to buy the Leonardo, Gouzer observed, “it’s one of the greatest discoveries in art history, and whoever is going to buy this can build a museum around this painting. It transcends any other work in that sphere of prices.”

If one looks far back enough into the wilder moments of auction history, the November 1989 twin auctions in Paris and Tokyo staged by French auctioneer Binoche et Godot, featured Pablo Picasso’s Blue Period “Les Noces de Pierrette” from 1905 and 26 Andy Warhol paintings from his transvestite inspired “Ladies and Gentlemen” series from 1975.

The Picasso sold for the dollar equivalent of $51.3 million to Japanese property developer Tomonori Tsurumaki, the highest price at that time for any work at auction.

The prices for Warhol’s “Ladies and Gentlemen” were elusive to track at press time in those bygone, pre-Euro currency times, but safe to say the results didn’t make headlines.

Though a Leonardo at auction is an ultra rarity, there is another authentic Leonardo currently on view (but not for sale) at the Museum of Modern Art, the first time that institution has exhibited a da Vinci.

The brush and ink drawing on blue prepared paper hails from her Majesty Queen Elizabeth II British Royal Collection and is part of “Charles White-Leonardo da Vinci Curated by David Hammons” (through January 1, 2018).

Hammons stages Charles White’s extraordinary painting, “Black Pope (Sandwich Board)” from 1973 on a solo wall across from the diminutive Leonardo that features the elaborate folds of a kneeling figure’s dress. 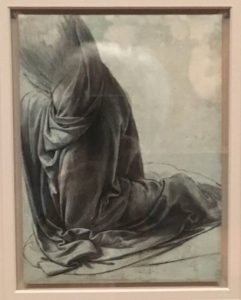 On a separate wall, the two artists’ natal charts are illustrated as analyzed by a Vedic astrologer.

Both White & da VInci were born in the early half of April, though 450 years apart.

White was an influential teacher of Hammons at the Otis Art Institute in Los Angeles in the 1960’s & the painting of the Black Pope is the first time the museum has exhibited the work since it was acquired by MOMA in 2014.

At least for a day, New York City has an unprecedented double-header of da Vinci on view.