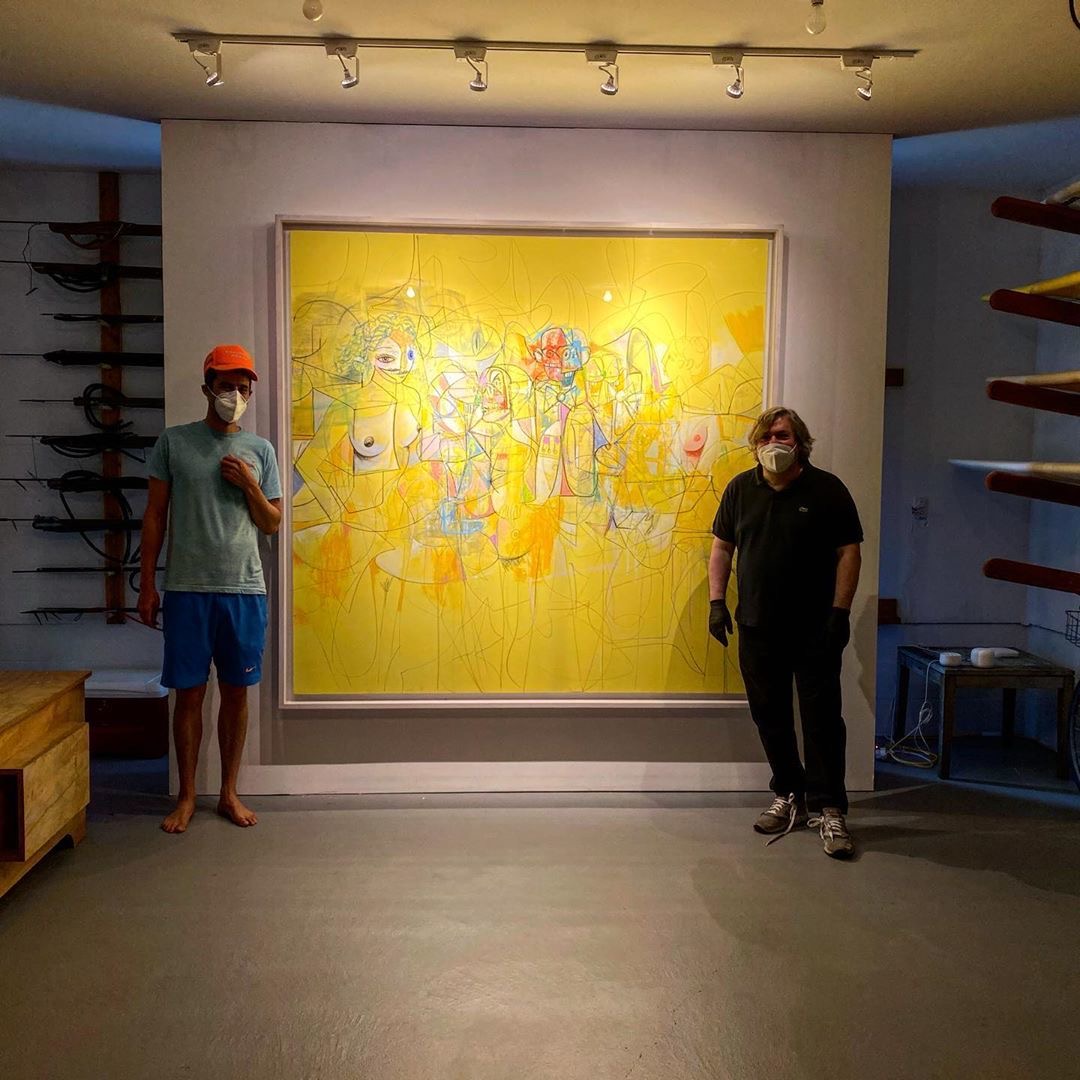 There must be something to write about, at least art market wise, in the dog days of summer, and revisiting Loic Gouzer’s newly formed auction app Fair Warning is as good a place to wander as any.

On Thursday (August 7), George Condo’s 76 by 78 inch painting, “Dreamscape” from 2010, executed in acrylic, charcoal and pastel on linen, sold to an anonymous bidder for $3,680,000, making it the sixth most expensive Condo at auction.

That said, art data site Artnet, doesn’t record Fair Warning’s sales and the six week old app, self-described as a ‘highly curated auction platform where you can access weekly, one-lot, live auctions,” has endured some criticism, as eslaydog cryptically wrote on the Apple App’s Store review, giving it one star and the comment “They sell your data to partners. Hard pass.”

Gouzer also reviewed his own site, reporting on June 25th “best app of all time.”

The picture, featuring the visage of a leering female nude standing amidst an amalgam of split and fractured figures in what Condo refers to as “Psychological Cubism.”

It was estimated at $2.8-3.5 million and came to market backed by an anonymous third party guarantor who presumably receives a financing fee for his or her trouble in case no one else comes up to bat.

There were four single bids placed by four different contenders and after some seconds of flashing countdown numbers and the final “Fair Warning” sign on your screen, it flashed “Sold.”

It wasn’t exactly a case of auction fever and the buyer seemed to win a well-priced prize.

The painting, falling between the blurry yet expressive lines of drawing and painting, is part of a series that debuted at the Skarstedt Gallery in New York in 2011 under the title: “George Condo: Drawing Paintings” and though this example wasn’t in the body of the exhibition, a closely related work, “Conversations,” a smaller variant at 65 by 50 inches, was in that mix.

In the press release for that exhibition (Condo has since moved on to representation by the mega-dealers Hauser & Wirth), the artist was quoted in part about the new paintings, “They are about beauty and horror walking hand in hand. They are about improvisations on the human figure and its consciousness.”

Gouzer also put in his ‘two cents worth’ on the Condo aesthetic in the miniaturized catalogue entry, writing, “He is easy to criticize by those accustomed to seeing mastery stemming out of a tortured soul rather than from a playful heart.”

A recent photograph of the two men standing at either end of “Dreamscape” in Gouzer’s elegantly appointed Montauk viewing room (and former garage), neatly telegraphs Gouzer’s intense connection to the contemporary art scene, something you wouldn’t ordinarily find (say) in a Christie’s catalogue from his former employer.

Condo’s oeuvre has become a muscular workhorse of the art market, with examples visible at virtually every major art fair and contemporary art auction around the globe, and one could easily fall into that refrain of ‘oh, another Condo,’ but there’s a reason for that blanket coverage, since Condo can really paint and has a personal vision driving that train.

That assessment from this observer has grown in part from the artist’s breakout retrospective, “George Condo: Mental States” held at the New Museum in 2011 to more sundry events such as his “intervention” at the exhibition ”Bacon’s Women” at the Pilar Ordovas Gallery in 2018-19 in New York where an inspired Condo painted a version of Isabel Rawsthorne, one of Bacon’s muses and the gallery temporarily hung it as a replacement for the real McCoy portrait during the final week of that extraordinary exhibition.

There are obvious similarities between the two artists, as absurd as that might sound, but only in terms of how they distort the human figure.

Back to Fair Warning, the site will auction Romuald Hazoume’s “Chouchou” wall sculpture from 2013 at a budget minded estimate of $20-30,000 on August 13th.
It carries a Gagosian Paris provenance.