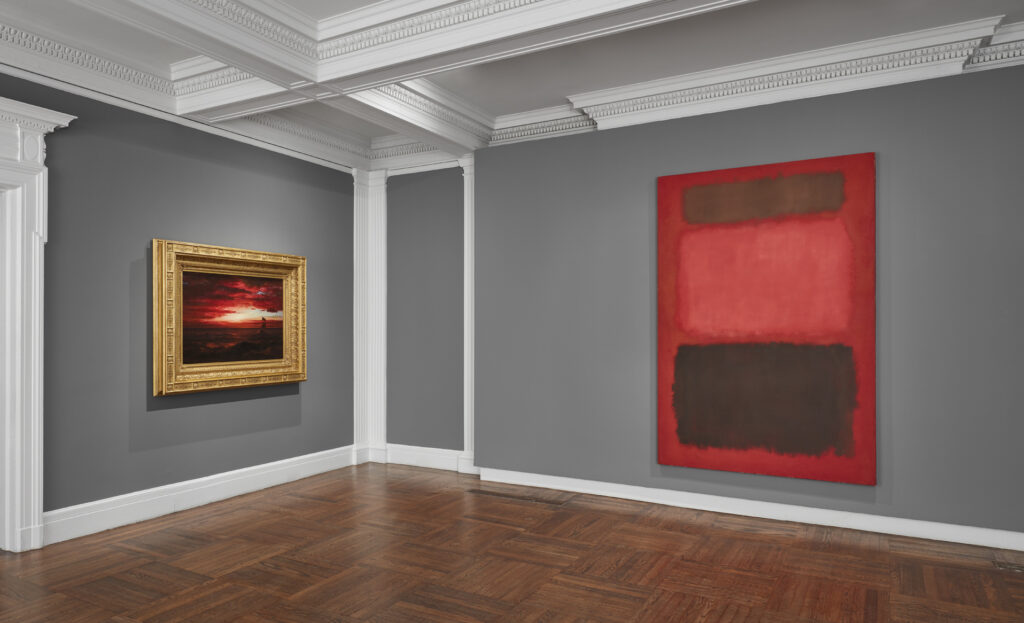 Though not exactly new in the gallery exhibition world of pairing artists from different periods, the current iteration of Frederick Edwin Church and Mark Rothko at Mnuchin is a dazzling affair, one producing a slow and sensual visual feast.

Robert Mnuchin isn’t a newcomer to pairing artists, going back to 1994 with Newman, Rothko, Still, 2010 with Tanguy and Calder and 2016 with Chamberlain and de Kooning. The current iteration is his brainchild.

But this time, the duo matches Church, a 19th century titan of American romantic landscape painting and Rothko, the 20th century master of Color Field painting.

The gap in time is essentially a century and despite this time warp gulf, the two sing together, certainly from different scores but the color wattage of cadmium reds, oranges and yellows set the gallery spaces aglow. 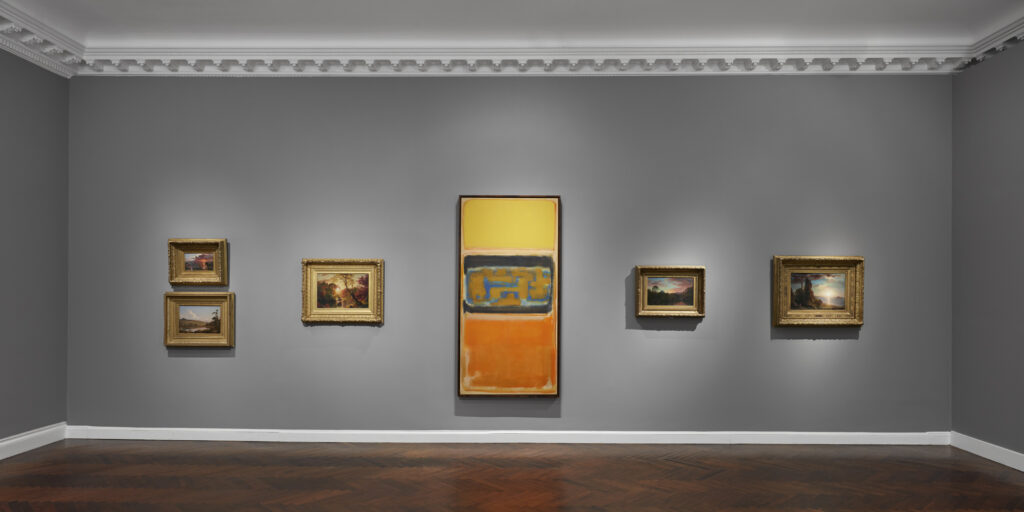 It is certainly strange to see the Yankee Church (1826-1900), the titular head of The Hudson River School sharing wall space with the Russian émigré Rothko (1903-1970) and the visual horseplay that ensues between romantic realism and Post War abstraction.

The exhibition, encompassing 17 works by Church dating from 1847 to 1870 and 10 by Rothko ranging from 1949-1968, came about as a collaboration between Robert Mnuchin, Michael Altman, a powerhouse private dealer/advisor and Christopher Rothko, the artist’s son and stellar steward of that legacy.

To whip all that together, John Wilmerding, the celebrated art historian, contributed a long and illuminating essay on the duo in the profusely illustrated, hard cover catalogue.

In it, Wilmerding brings up several exhibition comparisons, the most interesting being the late Kynaston McShine’s MoMA blockbuster “The Natural Paradise: Painting in America 1800-1950” that was exhibited in the fall of the Bicentennial year of 1976 and included an evenly matched roster of 157 19th and 20th century paintings, including ones by Church and Rothko. 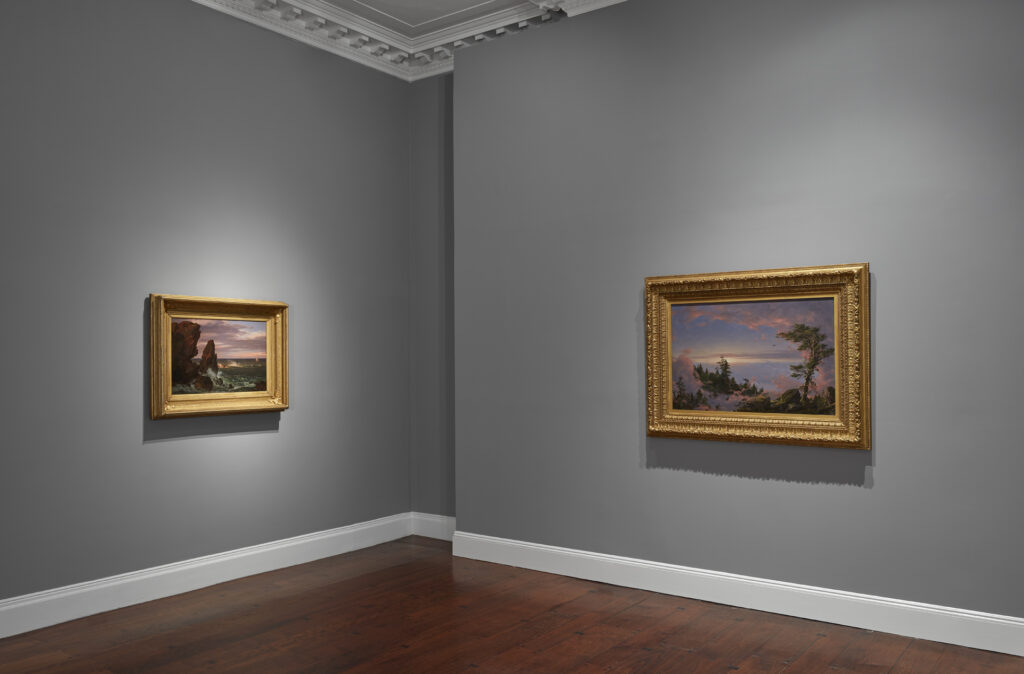 One of the standout gems in the Mnuchin exhibition is Church’s radiant “Marine Sunset (The Black Sea)” from 1881-82 that hung in the artist’s bedroom at Olana (now an Olana New York State Historic Site) and stayed with the family until it sold to Michael Altman in 2004. 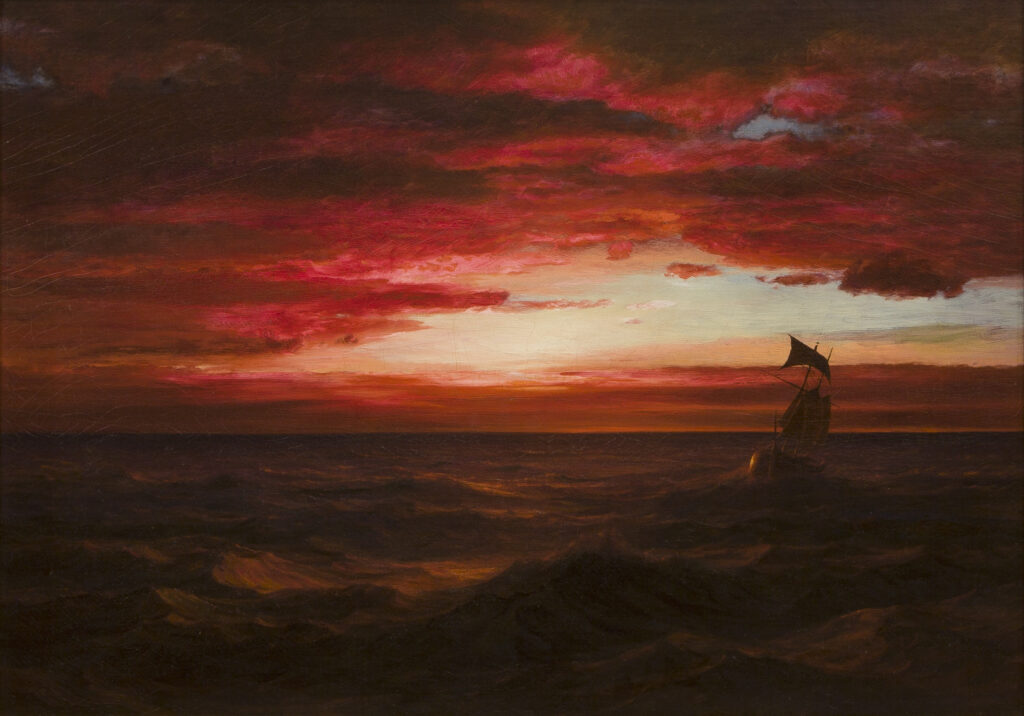 The solitary, single-masted ship sails towards the incandescent fireworks of a setting sun and appears to be a kind of swan song for the artist, made years after his colossal fame had faded.

The fire-stoked aura of the clouds radiates down to the choppy sea and epitomizes Church’s bravura brush and palette.

Even though its elaborate gold frame looks as if it might sink the painting, the image communes with Rothko’s magnificent, 91 by 60 inch canvas, “Browns and Blacks in Reds” from 1957, a tour de force of blazing color emanating from its field of floating rectangles.

Though Church’s canvases are horizontal in format and Rothko’s larger and vertical, the two color titans establish a believable interchange, at a Covid ravaged time when radiance and contemplation are pretty much lying at the bottom of the heap. 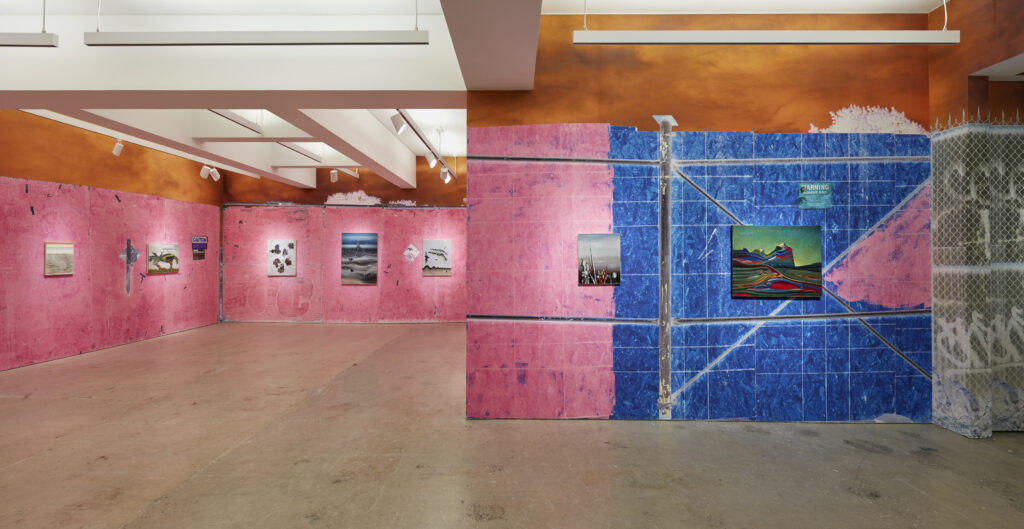 Another lively, artist pairing exhibition is on view a block away at Nahmad Contemporary

with “SUPERUNKNOWN/Max Ernst and Yves Tanguy with Urs Fischer.”

This time, the Dada infused and Surrealist streaked duo (both European refugees) are represented with paintings executed in the turbulent decade after World War I and through the more cataclysmic years of World War II. 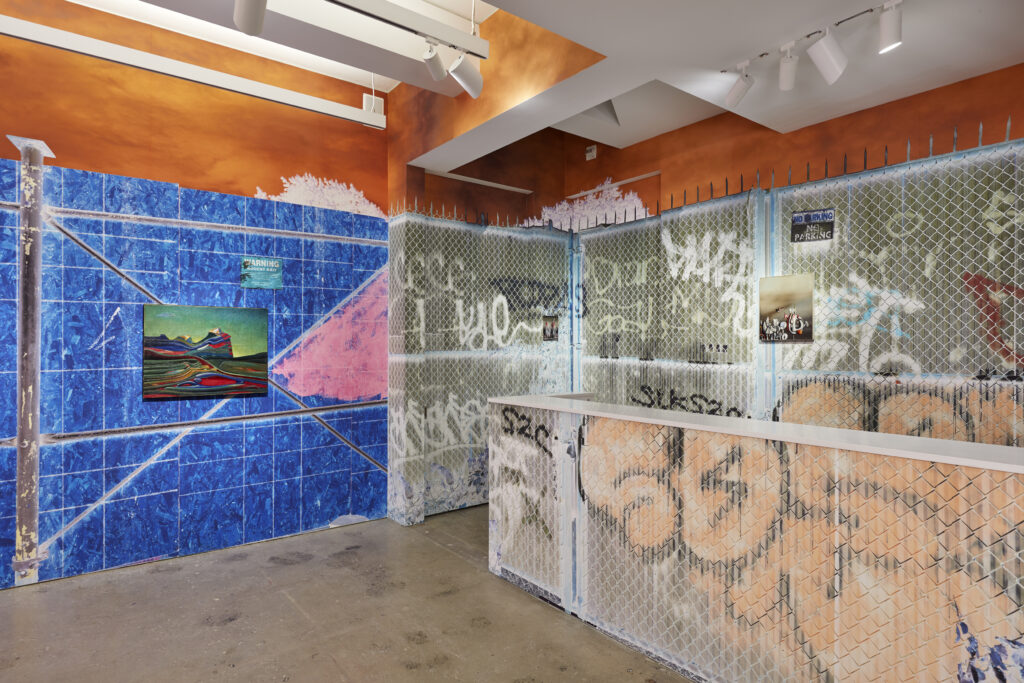 But instead of white walls as a backdrop, the works are hung along the floor to ceiling wallpaper expanse of Urs Fischer’s “Gap-toothed City” from 2017-20, a kind of photographic reprise in the negative of New York City’s graffiti bombed fences and downtown shops.

Even if the gritty assemblage strikes some as gimmicky, the individual paintings such as Ernst’s “Bird Cemetery” from 1927 and Tanguy’s “The Sifter of Gold” from 1945, are powerful and moving enough to offset the raffish sturm und drang of Fischer’s cityscape.

It is, after all, trying times. 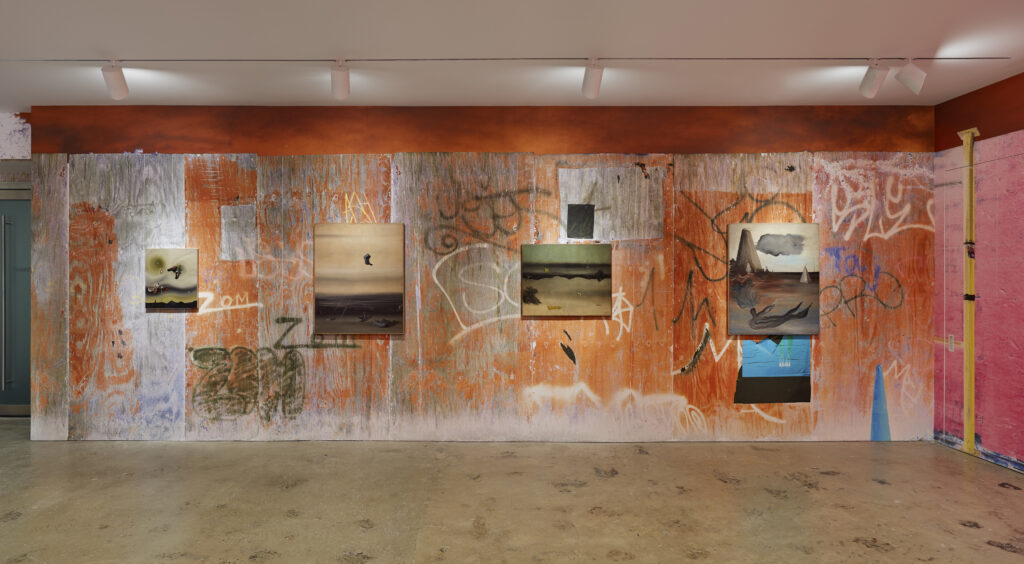