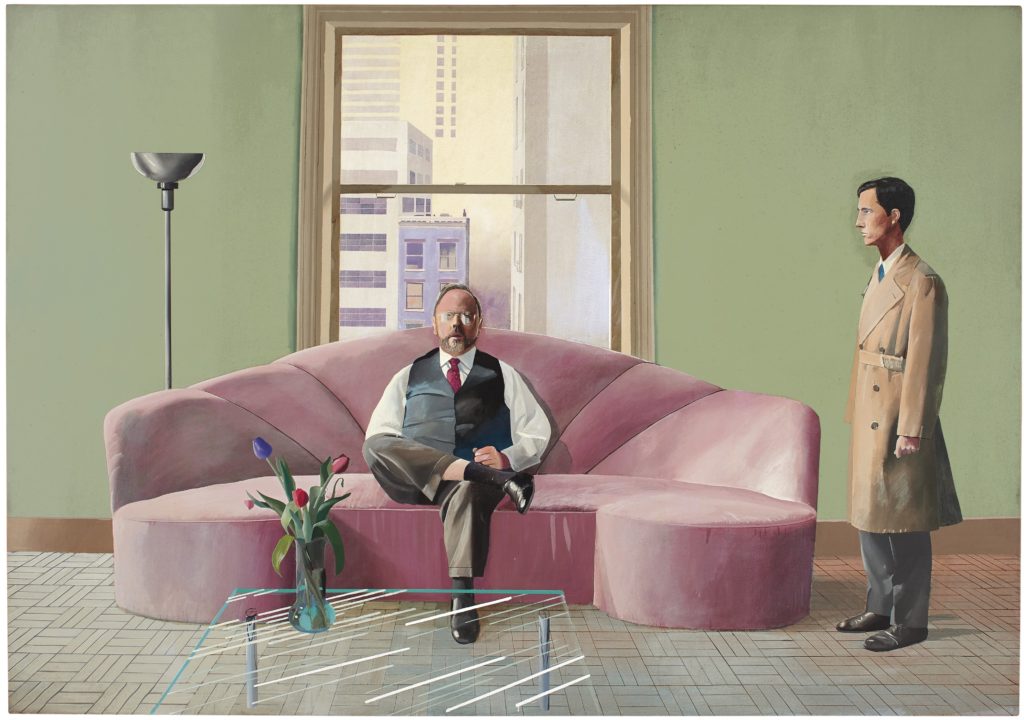 the stunning David Hockney double portrait, “Henry Geldzahler and Christopher Scott” from 1969 and cinematically scaled at 84 by 120 inches that sold to an anonymous telephone bidder for £37.6/$49.4 million (unpublished estimate in the region of £30 million).

Apart from a single David Hockney painting that contributed almost half of the £79.3/$104.1 million sale result of Christie’s Post-War and Contemporary art auction in London, little excitement was evident during the workmanlike evening.

Only three of the 41 lots offered failed to sell for an ultra-slim buy-in rate by lot of seven percent.

The hammer total of £67.4/$88.5 million (before fees), gives a clearer picture of the evening’s performance,

Fifteen lots made over a million pounds and sixteen exceeded one million dollars.

Nine lots, including the star entry David Hockney, were backed by third party guarantees and those guarantors receive an otherwise undisclosed financing fee for the risks taken, whether or not they actually acquire the work in question or are outbid in the salesroom. 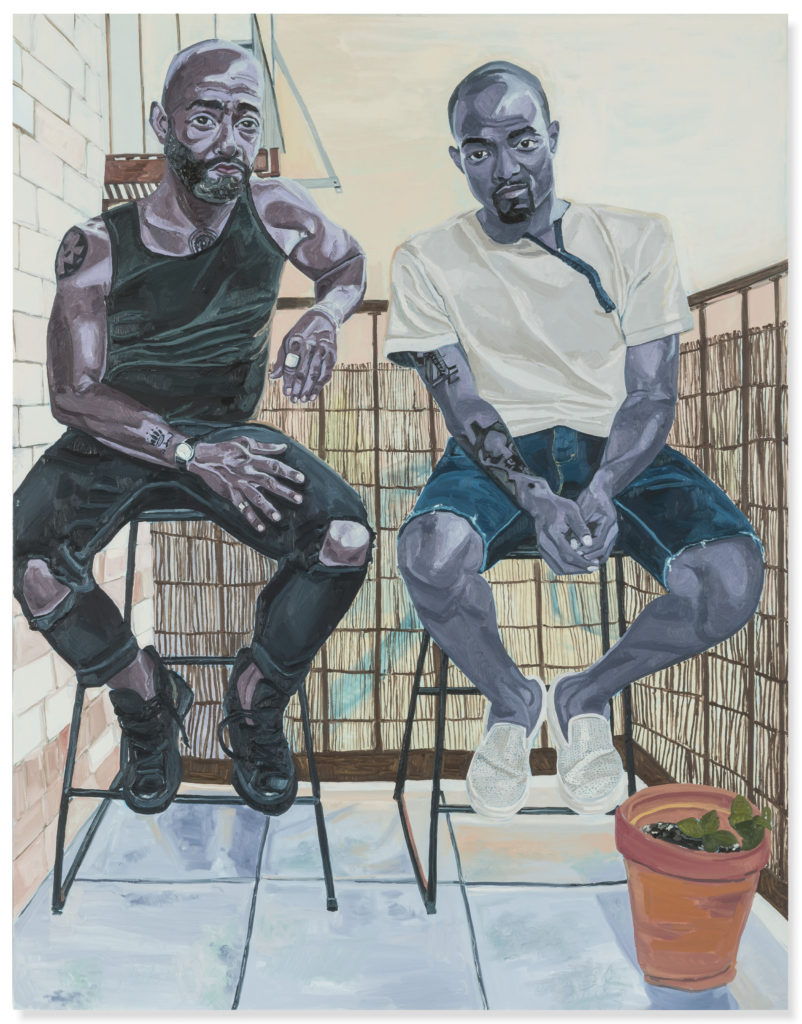 Oddly, or it seemed, there wasn’t a single Jean-Michel Basquiat or Andy Warhol in the entries while arch-rival Sotheby ‘s had four Basquiats and two Warhols in Tuesday evening’s stronger sale.

Still, Adrian Ghenie, now a stalwart, blue chip name, delivered with the large scale and distinctly spooky composition, “The Collector 4” from 2009, depicting a sleeping figure, Nazi bigwig and art looter Hermann Goring, laid out on a Spartan cot in an art-filled room and that sold to a telephone bidder for £2,651,250/$3,481,091 (est. £2.2-2.8 million).

The big moment of the evening, at least in value, was the stunning David Hockney double portrait, “Henry Geldzahler and Christopher Scott” from 1969 and cinematically scaled at 84 by 120 inches that sold to an anonymous telephone bidder for £37.6/$49.4 million (unpublished estimate in the region of £30 million).

Consigned by the art rich estate of American leisure travel magnate Barney Ebsworth, the painting was backed by a third party guarantee and was chased by four telephone bidders.

Henry Geldzahler, the legendary New York cultural maven and swashbuckling 20th Century Art curator at the Metropolitan Museum of Art of the ‘60’s & ‘70’s, is seated on a plush, art deco couch, with one leg crossed, showing some bare shin and fingers clasped on his ever present cigar.

His companion, Christopher Scott, stands beside the couch in profile, outfitted in a trench coat and tie, without a trace of emotion as he gazes into space.

But the real focus is on Henry, a close pal of Hockney’s, seated pasha like in the middle of the sofa, his back to a large picture window showing a New York high-rise.

Ebsworth acquired the painting privately from New York’s Mitchell-Innes & Nash in 1997 for an undisclosed price. It had previously sold at Sotheby’s New York in November 1992 for $1.1 million.

The consigners back then were the family of art publisher Harry N. Abrams who acquired the painting from New York’s Andre Emmerich Gallery in 1969, during
Hockney’s solo exhibition there.

The painting, which was backed by a third party guarantee, now ranks as the second most expensive Hockney at auction, trailing “Portrait of an Artist (Pool with two Figures)” from 1972 that sold at Christie’s New York in November 2018 for a staggering $90.3 million. 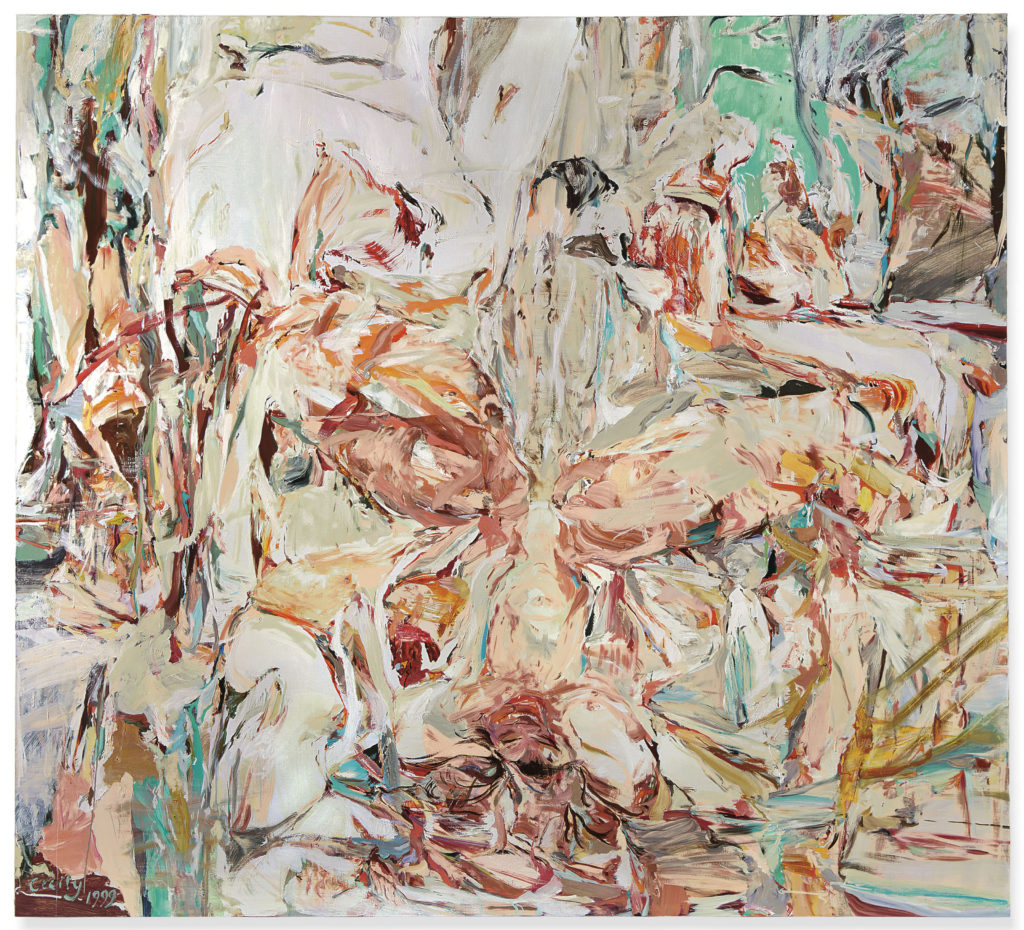 Like the Ghenie and the Hockney, it came to market backed by a third party guarantee.

The Richter last sold at Sotheby’s New York in November 2017 for $3.8 million and the Mitchell entry bought in at Christie’s London in February 2014 against an estimate of £1.2-1.8 million. 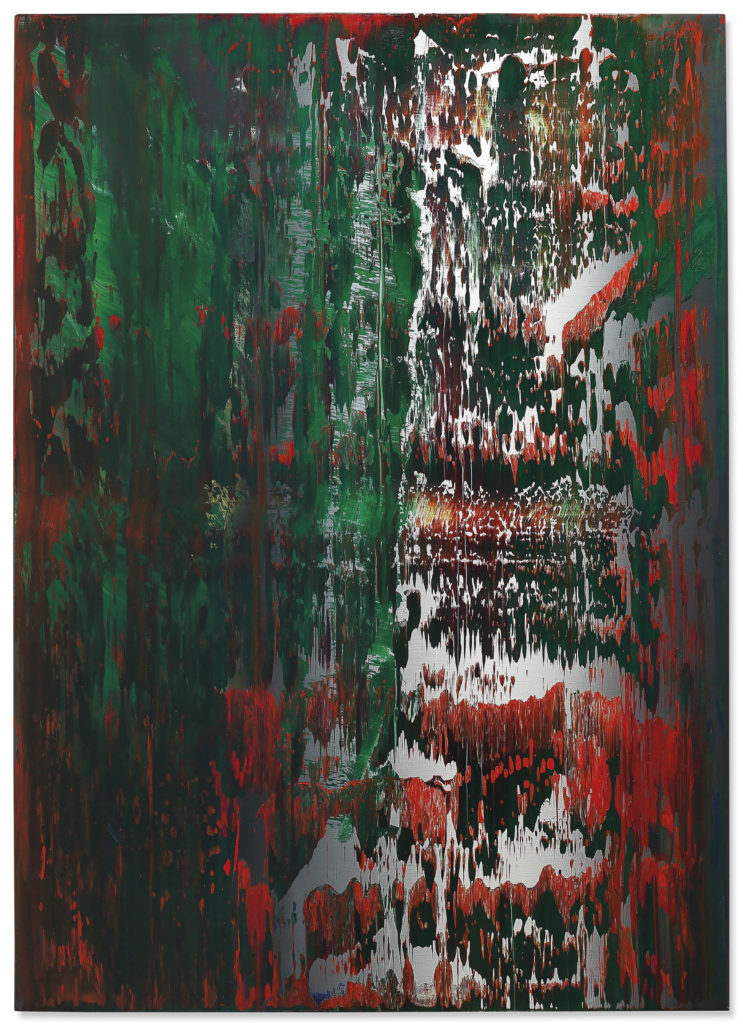 Gerhard Richter, “A B, Tower”

Of the few casualties, none was more surprising than Peter Doig’s striking figurative work, “Haus der Bilder (House of Pictures)” from 2001, depicting a red-haired figure from the back, cloaked in a bulky overcoat and standing in front of an Austrian movie theatre that bought in at £2.4 million (est. £3-5 million).

Was the estimate too ambitious, did the departure of rainmaker Francis Outred affect the outcome or is the looming specter of a hard Brexit impacting the London market?It’s anybody’s guess.s.

While the bidding throughout the relatively short evening played more on the conservative or even lower side of the pre-sale estimates, Nicolas de Stael’s color saturated and widely exhibited  “Bouteilles (Bottles),” executed in oil on canvas from 1952, triggered a bidding war and raced to £4,519,250/$5,933,775 (est. £1.8-2.5 million).

Even without Basquiat and Warhol, you could tell you were in the big leagues with Lucio Fontana’s four precisely cut strokes on a pristinely white canvas in “Concetto spaziale, Attese” from 1960 that sold to another telephone bidder for £2,291,250/$3,008,411 (est. £2-3 million).

Fontana is currently the subject of a major retrospective in New York at the Met Breuer (through April 14).