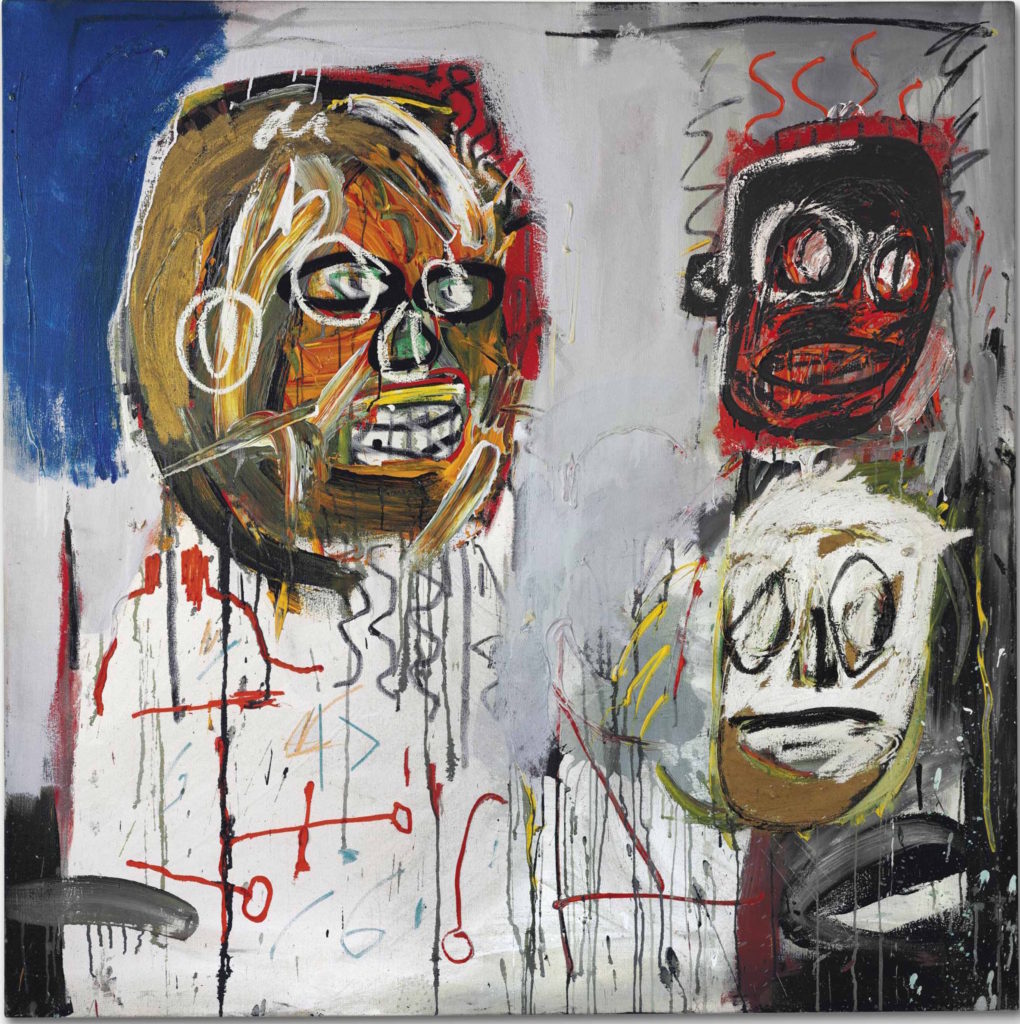 BASEL  – The 48th edition of Art Basel, Europe’s premier modern and contemporary art fair, opened with an enthusiastic bang on Tuesday to a pre-sorted group of v.i.p. collectors and their retinues.

A beautiful Vija Celmins “Blackboard Tableau #12” from 2007-2015, comprised of one found tablet and one made tablet in wood, leather, acrylic, alkyd, oil and pastel, and measuring 11 by 18 ½ by ¼ inches, sold to a private collector at New York’s Matthew Marks Gallery for around one million dollars.

It was acquired as a promised gift from the trustee/collector to an otherwise anonymous Midwest museum .

The blackboard surface is replete with the artist’s exquisite and delicate lines. 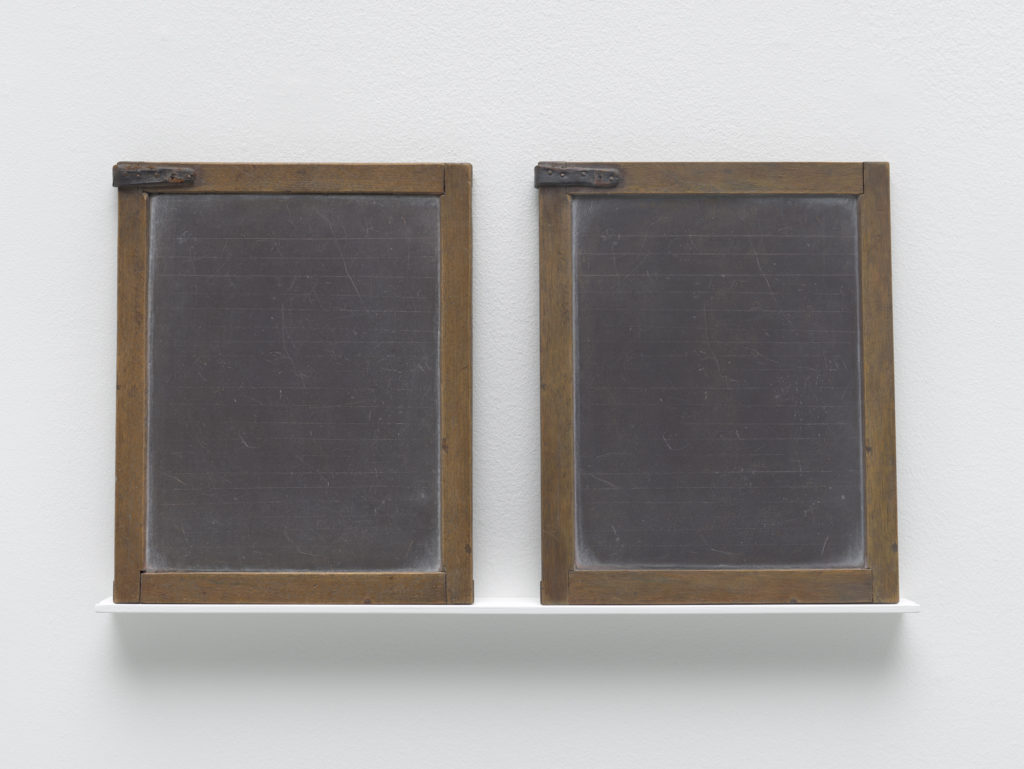 A petite yet power-packed Gerhard Richter watercolor on paper, “Untitled (10.3.91)” from 1991 sold to an American collector at San Francisco’s Anthony Meier Gallery for $475,000.

The stand’s totemic and stand out Donald Judd ten-unit stack, “Untitled (88-31 Bernstein)” from 1988 in copper and green plexiglass, was on offer at $18.5 million and hails from the owner who acquired it back in 1988.

Early sales, meaning just minutes after the first rush of v.i.p invitees, included Eric Fischl’s oil on linen “Turner” from 2016 at 70 by 60 inches at New York/London’s Skarstedt Gallery and that sold for $600,000.

It is part of the artist’s so-called art fair paintings, depicting in this case a pony-tailed woman clad in a black outfit and wearing pointy boots, looking into the distance with the blurry visage of a yellow framed Turner painting hanging on the wall behind her. She is flanked by two other equally absorbed viewers.

Skarstedt also sold a trio of Thomas Schutte bronze heads from 2006, all titled “Wicht” and numbered 3, 4 and 7 to a private collector for $1.95 million.

The Reina Sofia in Madrid owns all twelve heads from the edition of six.

“It’s still early,” said gallery founder Per Skarstedt, “and we’re seeing a lot of good people and a lot of things are cooking. People are walking around, comparing notes.”

At New York/London Levy Gorvy, the gallery sold one of Dan Colen’s new “Purgatory” paintings to an American foundation for $450,000. Colen recently joined the gallery from Gagosian and the painting is a prelude to his March 2018 solo at the gallery.

“We sold about seven things in the first hour,” said gallery partner Brett Gorvy, the former rainmaker at Christie’s, “and we took a policy of having very little holds. We sold to Chinese, European and American collectors.

The gallery also sold Vincenzo Agnetti’s “Assioma-Work almost forgotten by heart” from 1971, comprised of letter-perfect white text on a coal black background for $90,000.

By mid-afternoon, the gallery still had on offer a bristling Jean-Michel Basquiat painting, “Baby Boom” from 1982, armed with exposed and string tied supports and bearing a $32 million asking price.

(As you probably recall, Sotheby’s New York sold another 1982 Basquiat, “Untitled” last month for a record $110.5 million. Though that price may represent an extraordinary one-off, any Basquiat coming to market today bears that benchmark in mind).

The gallery also had on offer, a rare to market 1939 Pablo Picasso, “Portrait de Dora Maar” from the estate of Andre Breton and priced in the region of €5-10 million.

The artist gave the oil and gouache to Breton in 1941 to help out his down and out friend during the dark and grim days of World War II, but Breton never sold it.

“The two things I liked sold already,” complained collector Dimitris Mavrommatis, a major player in the secondary market. “There was a Baselitz at White Cube and a Basquiat at Acquavella, but they got away.

Mavrommatis did get several design works at Design Miami/ Basel across the Messeplatz, including a Studio Job peeled “Banana Lamp (Model B)” from 2015 at London’s Carpenters Workshop Gallery and a Maria Pergay armoire at New York’s Demisch Danant for $150,000, according to the collector.

The missed Basquiat at Acquavella Galleries, “Three Delegates” from 1982, and fiercely executed in color-charged acrylic, oil stick and collage, sold in the region of the $18 million asking price.

“The fact that it sold at the fair,” said director and author Michael Findlay, “and it wasn’t pre-sold, is about all that I can tell you.”  The work came from the mega collection of Greenwich Connecticut based mogul Peter Brant.

Speaking of pre-sold works, a kind of trendy insurance policy for dealers at art fairs, turned off at least one unnamed Mainland Chinese collector who came to Basel for the first time.

“A client came here with the intention to buy,” said Philip Hoffman, founder and ceo of the London based Fine Art Group, “and tried for two things in the $250-500,000 range in about the first 90 seconds of the fair. Both had already sold. It puts off the non-professionals,” opined Hoffman.

Most of the blue chip action was confined to the ground floor (Hall 2.0) of the fair while more primary market material was on offer upstairs (Hall 2.1).

That mind the gap difference in pricing and transactions between the two floors is growing, according to some observers, a reflection of the art market in general.

“The thing that has really changed,” said Roberto Moiraghi, director of the London based Massimodecarlo Gallery, “is that you sell extremely little here, and the split between the first and second floor is becoming larger. People are coming up here later and have alreadyspent their money.”

Still, the gallery recorded a handful of sales in the early hours, including a new and untitled John Armleder abstraction from 2017 in the region of €100,000, a new Rob Pruitt, five row group of framed abstract paintings, “Times and Moods” for $220,000 and a small scaled and shaped Nate Lowman work, “USA Little Flag Flower” from 2010 to another European collector for $120,000.

The gallery also sold a large-scaled, silver patterned Rudolf Stingel abstraction but on the client’s request, declined to divulge a price.

Clusters of sales upstairs were also noted at New York’s Sikkema Jenkins Gallery where a Kara Walker, wall hugging installation of 62 drawings, “Notes Drawn by a Negress after a long absence” from 2016 and executed in mixed media on paper sold to Hong Kong/Berlin collectors Max and Monique Burger for around $300,000, according to the gallery.

Another head turning Walker, “Raw Pigment” from 2016, in watercolor on paper sold to another European private for $150,000.

“I haven’t seen many Americans,” observed gallery founder Brent Sikkema, “there would have been more if Basel had been closer to the Venice Bienalle. The Americans did Venice and then went home.”

Sikkema Jenkins also sold at least eight archival pigment print photographs by Erin Shirreff at $16,500 each, comprised of small-scaled, hand-made sculptures photographed by the artist and manipulated by the computer to make them appear monumental. They all hail from an edition of four.

“We’ve sold a lot,” said gallery founder of the eponymous Sean Kelly Gallery in New York, “and holding up after all of our exertions going around the world.”

“It sold right away to a new person based in Switzerland,” said the dealer, “it’s a joy to be here and this is Basel at its best. There’s fantastic energy here and an incredible international turnout. It really is like no other art fair.”

In the growing roll call of top class works, New York/London David Zwirner Gallery sold a burlap and oil on canvas composition by Alberto Burri, “Sacco (Sack)” from 1954 for $10 million and a decidedly large scale and wonderfully marshy Sigmar Polke painting, “Nacht Kapper I (Night Cap 1)” from 1986 in Indigo and alcohol varnish on canvas to a European institution for E 8 million (as in Euro).

Before that sale, mega collector Steve Cohen and advisor Sandy Heller soaked in the remarks of David Zwirner as the trio inspected and admired the painting at close range.

The fair runs through Sunday June 18.