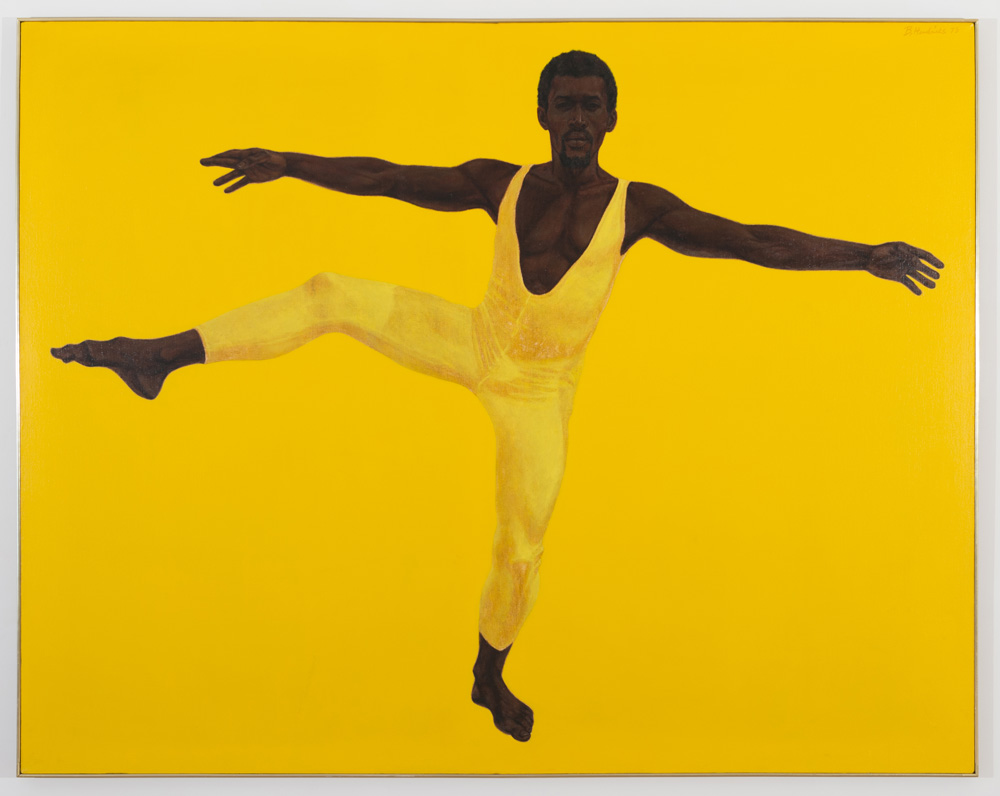 The art market continued to show its muscle on Thursday, the first day Art Basel opened its doors to the general, tire-kicking public.

The cavalcade of million dollar plus works continued in spirited fashion as New York’s Edward Tyler Nahem Gallery sold Tom Wesselmann’s impressive “Drawing for Nude on a Couch” from 1971 in charcoal on canvas and measuring 41 ¾ by 96 ¼ inches for $4.4 million to a European collector.

The painting was featured in Wesselmann’s solo show at the Sidney Janis Gallery in New York in 1972, one of 22 works in the exhibition.

The nude resides on a couch, Maja style but with Pop Art punch. A fruit still life is visible behind her on the window sill that gives a view of a suburban house.

At New York/London’s Luxembourg & Dayan, Maurizio Cattelan’s wickedly clever “Untitled” from 2009, consisting of a creased white canvas deliberately hung in a tilted manner and pierced by an industrial broom sold to an American Foundation for $1.5 million.

In an earlier dispatch collector Dimitris Mavrommatis incorrectly stated to this writer that he had bought the work. In any event, the Cattelan hails from an edition of three plus two artist proofs 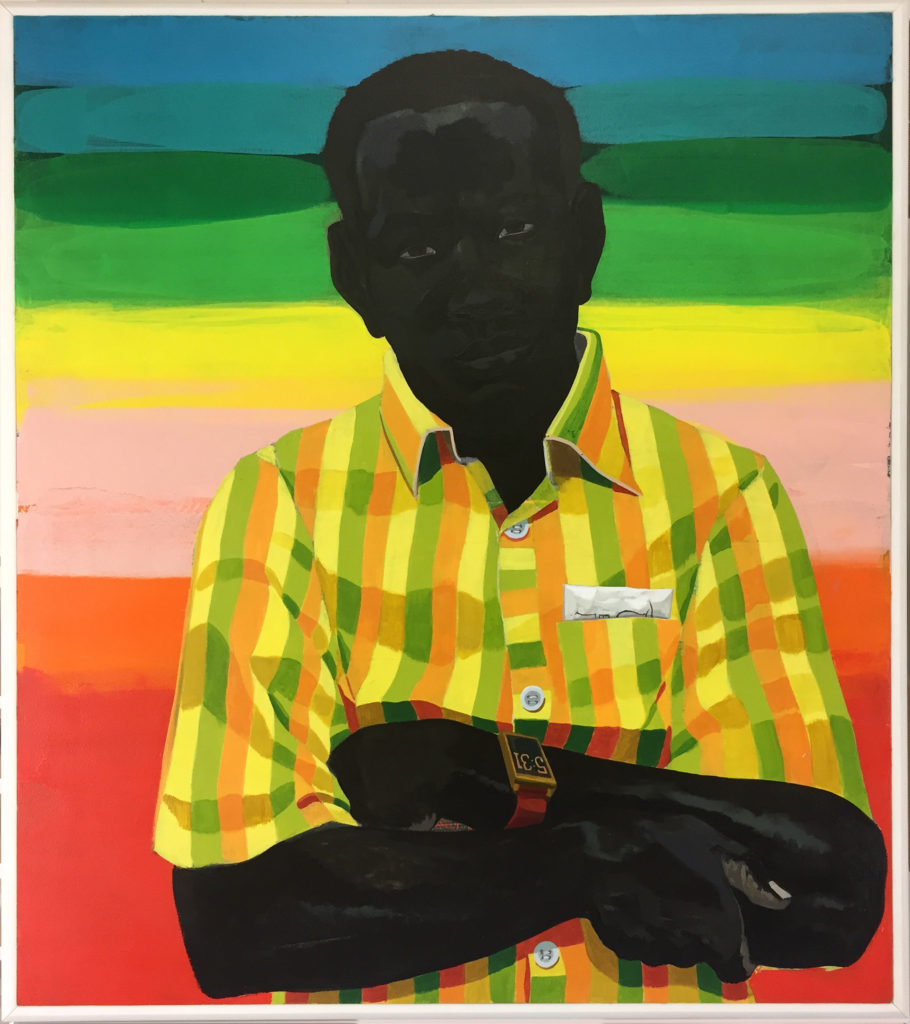 The bridge is abuzz with summer tourists and shocking elements, including a black male figure clad in an outrageous costume and bearing a sandwich board advertising fish and chips.

Shainman also sold the late Barkley L. Hendricks “Woody” from 1973, depicting a black ballet dancer clad in a yellow leotard with arms spread in position and set against a yellow wall. The 66 by 84 inch painting in oil and acrylic on canvas sold for $750,000.

The artist died at age 72 in April.

At Los Angeles, New York and Tokyo’s Blum & Poe Gallery, Whitney Biennial star Henry Taylor was represented by a stunning figurative work, “Cicely & Miles Visit the Obamas” from 2017, in acrylic on canvas and scaled at 84 by 72 inches.

The decked out figures of Cicely Tyson and Miles Davis occupy the center of the foreground with the White House directly behind the luminous figures.

“Right now for me,” said founding partner Tim Blum, “Henry is the most fun experience where all the forces are meeting in the middle.”

Blum said the painting , which recently graced the cover of Art in America magazine was bought by a collector who will donate it to a major American museum.

Taylor has a solo show at Eva Presenhuber Gallery in Zurich.

A number of exhibiting dealers here raved about the fair, including Iwan Wirth, co-founder of London/New York/Zurich’s Hauser & Wirth.

“I’d say we’ve been doing this fair for two decades,” said Wirth, “and in terms of sales’ values and volume, is our most successful fair. It proves to be the mother of all fairs and keeps that number 1 place by far.”

Wirth, who also sold a Piero Manzoni abstraction, “Achrome,” 1958 – 1959, Creased canvas and kaolin, 70 x 100 cm,  for over $10 million, joked that Basel, the quiet and petite river front city is the perfect location for a fair, compared to New York or London since “people aren’t distracted. All the attention here is in the fair.”

Not to sound like a cheerleader, but this fair, the 48th iteration, outdid itself this round.

That looked the case at New York’s Fergus McCaffrey Gallery where founder Fergus McCaffrey observed, “we’ve sold thirteen objects so far in the price range of $35,000 to $5 million, including five works by Carol Rama at prices ranging from $90,000 to $275,000.”

Rama is currently featured in a critically acclaimed retrospective at the New Museum in New York.

McCaffrey noted the seeming absence of Americans. “Everything we sold in this booth has gone to non Americans, to Asia, both China and Japan, South America, Mexico and Canada. Japan has really started collecting again.” 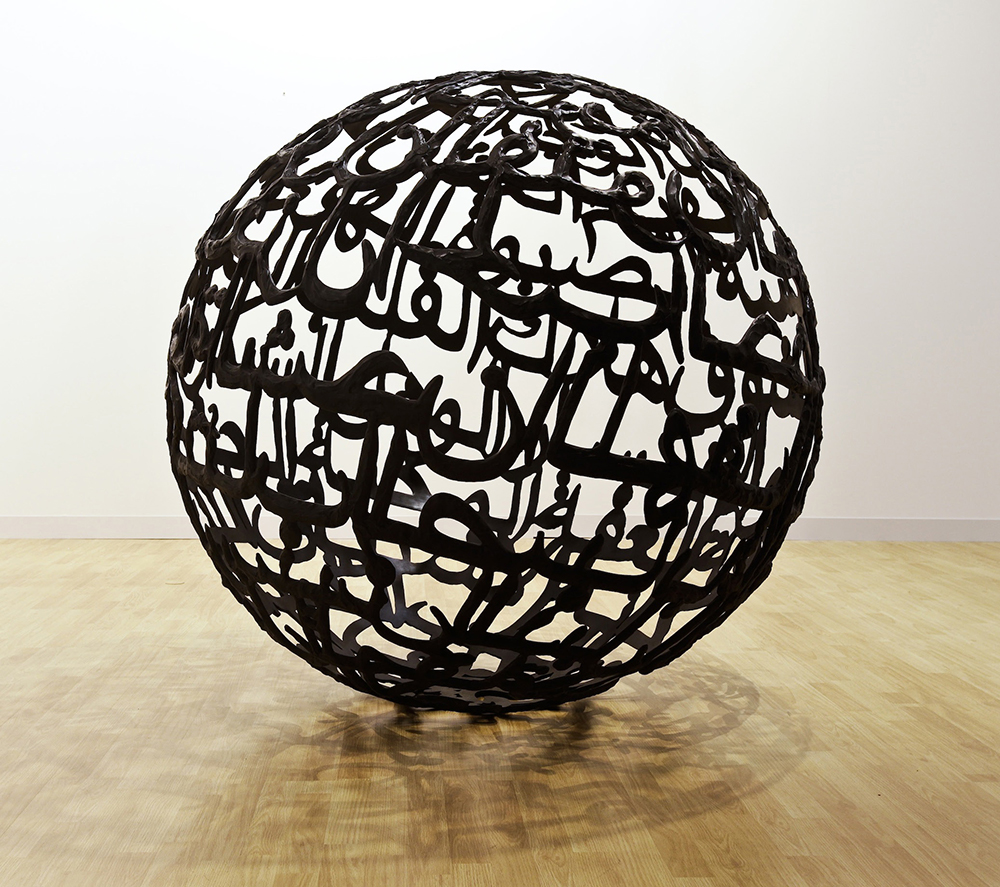 The Seo-Bo measures 51.57 by 63.78 inches and shouldn’t be mistaken for another glorious work by Cy Twombly, yet there is certain handsome resemblance.

The market impact of museum shows was also evident at the fair with works by German photographer Wolfgang Tillmans, currently enjoying a retrospective at Fondation Beyeler, and just months after his successful exhibition at Tate Modern.

“There’s a tremendous appreciation for both his framed and unframed works,” said London’s Maureen Paley, “and that’s been very gratifying. We’ve sold about a dozen works by Tillman across the board, from $10,000 to over $100,000,” added Paley. 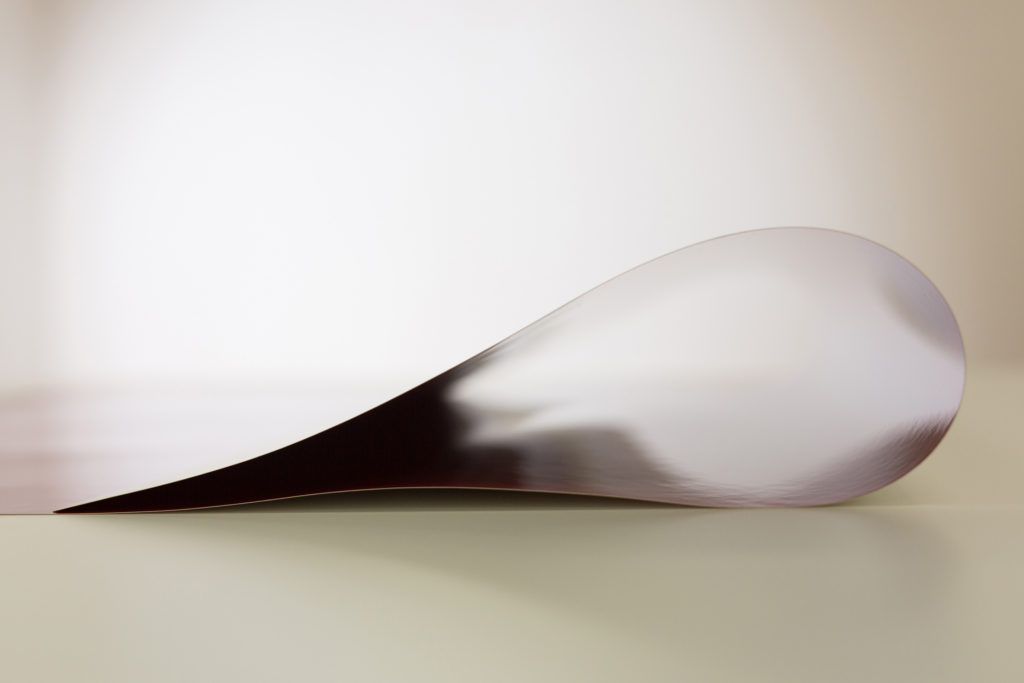 “He’s so much in love with the paper it is printed on, they’re kind of tribute works,” said Paley.

At London’s Alison Jacques Gallery, a group of eight unique sketches from 1952-57 by Lygia Clark sold to an American foundation in the region of the $1.2 million asking price and a large-scaled composition by Irma Blank, “Trascrizioni, All Around” from 1976, executed in India ink on parchment like paper and numbering 392 pages.

Asked about the state of Art Basel, which runs through Sunday, Marc Spiegler, global director, Art Basel said, “we knew it was going to be a show with very good works attended by very good patrons. It turned out to be a show of extraordinary works attended by extraordinary patrons. This show proves once again the Basel show deserves its reputation as the best art fair in the game.”

Who could argue that point?