The first iteration of TEFAF Online 2020, an art fair limited to “300 Masterpieces” and allowing each exhibitor a single entry, closes tomorrow (November 4) with at least one happy exhibitor.

New York’s Di Donna Gallery sold a rare and mysteriously atmospheric painting by the reclusive Danish artist Vilhelm Hammershøi (1864-1913), “Interior with a Woman Standing” from 1913 during the V.I.P. preview to a European client for over $5 million.

“Unlike any other online fair,” said gallery founder Emmanuel Di Donna, “they allow each exhibitor to have one object that best defines the gallery’s identity and model or whatever, and I find that quite exciting.” 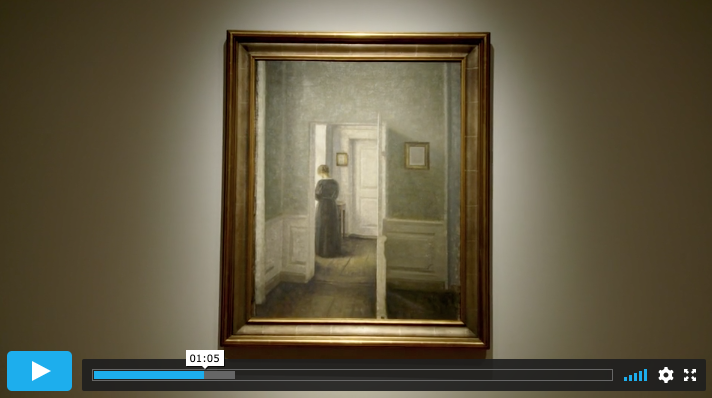 As Di Donna, the former vice-chairman of Sotheby’s Impressionist & Modern Art world-wide and whose gallery specializes in top-tier, 20th century pictures and collections, further observed, “I’ve done a couple of virtual art fairs and we’ve sold a few things, but it’s not easy to show something special when it’s drowned by thousands of other objects. The concept of showing one great work in a way appealed to me, because I wouldn’t have put something so important as the Hammershøi in such a public facing environment.”

In fact, Di Donna said that when he first got hold of the painting on consignment it was meant for private sale but a few days later, it became the obvious choice for TEFAF.

He described the buyer as “a client, somebody that we’ve transacted in the past with but not necessarily for something like that, got interested and bought the picture.” 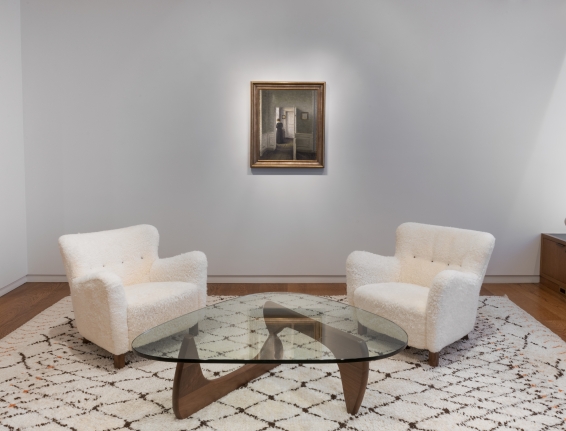 In anticipation of the fair, the gallery produced a sleekly informative five minute video on the artist and the featured painting that also graced the cover of the Musee Jacquemart-Andre retrospective catalogue, “Vilhelm Hammershøi (1864-1916): Danish Painter of Solitude and Light” that ran in Paris from March-July, 2019.

In a more local vein, The Metropolitan Museum of Art has a rare, 1911 unfinished “Self-Portrait at Spursveskjul” (Sparrows Retreat), painted during a summer holiday at his rented home outside Copenhagen. 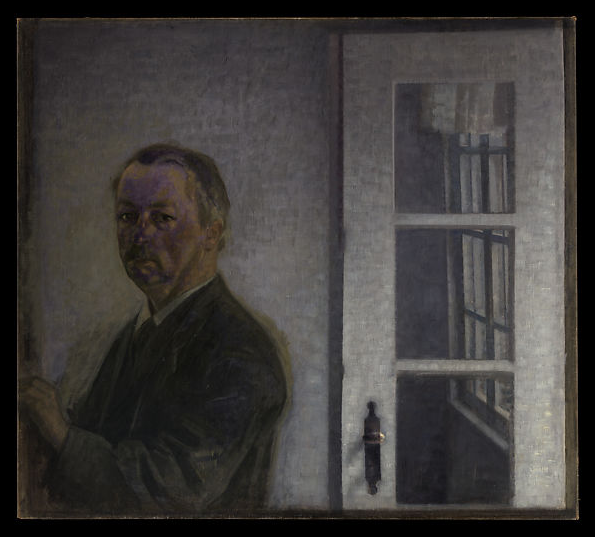 Formally outfitted in a suit and tie, the artist occupies the left side of the composition, leaving a glass paned door allowing a view from the balcony to another interior room, center stage. You can see the edge of his easel and it is plain it reveals a mirror image since the right-handed artist is depicted holding a brush in his left hand. It joins another Hammershøi, “Moonlight, Strandgade 30,” making it one of the few held in American museums. 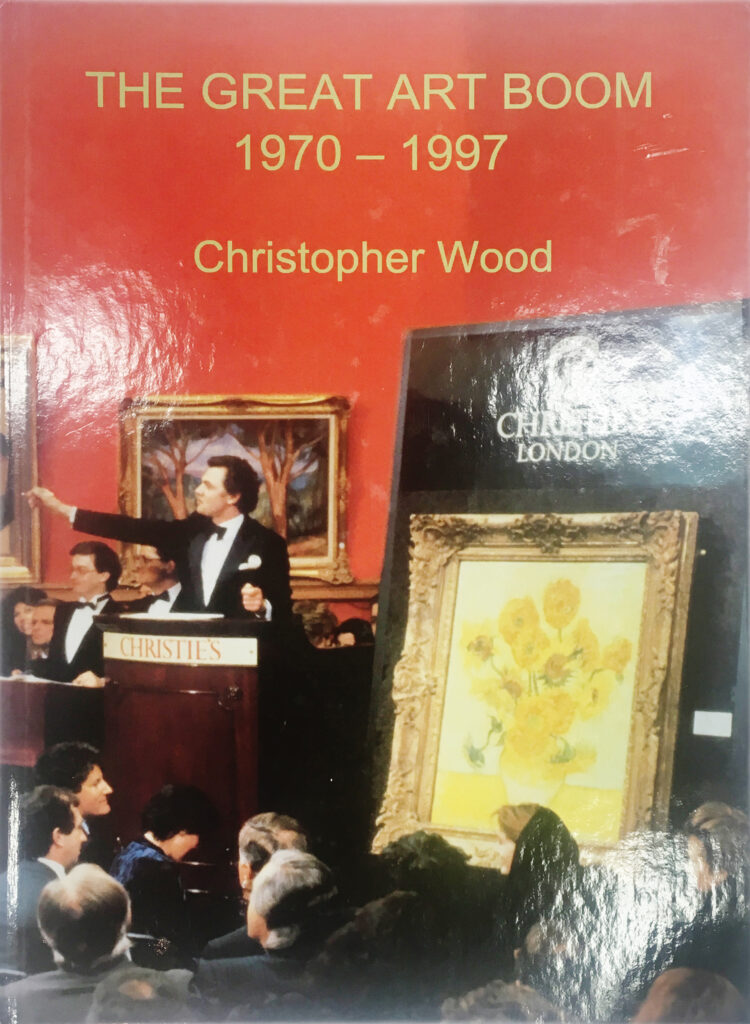 Eighteen works by the artist have sold for over a million dollars at auction and as Christopher Wood commented in his storied volume from 1997, “The Great Art Boom: 1970-1997,” the time to buy Hammershøi would have been in the 1970’s, when his work was still virtually unknown outside of Denmark.”

Still, the artist’s top price listed in Wood’s book, a precursor of digital art databases, was just under $60,000 for “Drawing Room Interior with Lady Standing by Table” from 1897 and that sold at a Copenhagen auction house.

“Interior with a Woman Standing” depicts the lone figure (the artist’s wife) with her back to the viewer, clothed in a black dress with the nape of her neck warmly illuminated by a shaft of light coming from the nearby window. We see her through an open doorway of a minimally furnished, austere apartment and might guess she’s reading a letter by an unadorned, dark wood tea table.

One thinks instantly of a Vermeer woman or for that matter, a solitary female figure from an Edward Hopper painting.

The details are mesmerizing and mysterious, such as the two small, gold-framed pictures that are fuzzily blank as a Morandi vessel, so much so, the composition feels abstract and luminously minimal.

Though Hammershøi was mostly obscure outside of Copenhagen during his lifetime, he had met his contemporary Edvard Munch and ventured a few times to Paris where the poet Rainer Maria Rilke became infatuated with his work and traveled to Copenhagen desiring to write a book about the artist. That never happened. 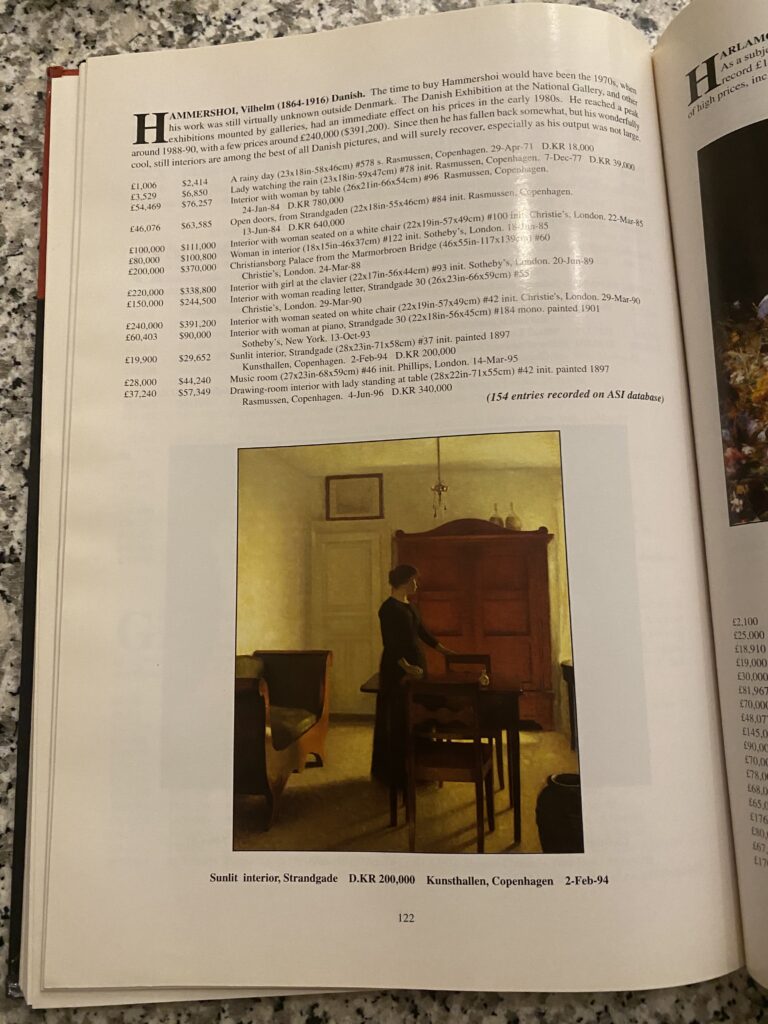 The page from Christopher Wood’s 1997, “The Great Art Boom: 1970-1997” concerning “Drawing Room Interior with Lady Standing by Table” from 1897 and that sold at a Copenhagen auction house.

Though little documentation in the form of letters, journals or diaries of the artist exist and that would have expanded what he felt about his melancholic yet startlingly modern paintings, he did say in a rare, 1907 interview, …”what makes me choose a motif are…the lines, what I like to call the architectonic attitude in the picture. And then the light, naturally. Naturally it also has a great deal to say, but what means practically the most for me is the lines.”