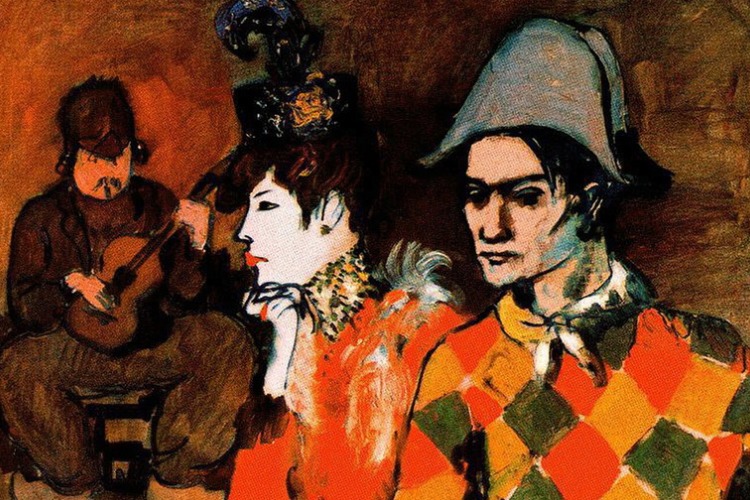 Self-Portrait From 1905 to Be Auctioned

A spectacular Picasso bistro painting from 1905, showing the brooding 25-year-old artist in a skin-tight, diamond-patterned harlequin suit with vibrant splashes of red, green and gold, will be sold by Sotheby’s in New York Nov. 15. The self-portrait, entitled “Au Lapin Agile” (“The Sprightly Rabbit”), belongs to the same family that sold van Gogh’s “Irises” two years ago at the same auction house for $53.9 million, a record for any work of art sold at auction.

“If there’s any logic in the world, it should bring more than $40 million, and perhaps as much as $50 million,” said David Nash, a vice president at Sotheby’s. The ruggedly bold self-portrait “Yo, Picasso” from 1901 fetched $47.85 million last May in New York, and the moody 1905 “Acrobat and Harlequin” was auctioned at Christie’s in London last November for $38.45 million.

Linda de Roulet inherited the Picasso from her mother, Joan Whitney Payson, when she died in 1975. The painting has hung in the main hall of the family’s Long Island home in Manhasset pretty much undisturbed since it was first purchased by Payson from her favorite New York dealer for $60,000 in 1952, according to family spokesman John Whitney Payson, who is Linda de Roulet’s brother. The painting was only loaned out twice during her lifetime and once since, when her art collection toured in Japan.

John Payson, who consigned “Irises” in 1987, explained in a phone interview, that his mother bought “Irises” from the same dealer, Carmen Messmore of Knoedler’s, in 1947.

Asked why his older sister, Linda, was selling the painting now, Payson said she was influenced by the recent high prices of the two Picassos from the same period. “She began to be a little worried about the painting being in her home from a security standpoint,” said Payson.

Payson-clearly relishing the anecdote-explained that the final “kicker” came last Christmas when his sister’s grandsons were playing with a new toy in the Long Island home. “She found her grandsons had set up their new dart board on the back of the couch, directly underneath the painting, and that was enough of an omen.”

De Roulet, who took over her mother’s job of running the New York Mets baseball team in 1975 and stayed on as chairman until the team was sold in 1980, is currently a vice chairman of the board of trustees of North Shore University Hospital in Manhasset. She plans to set up a foundation in medical research and education with some of the proceeds from the sale, according to her brother. Asked how much she would donate, Payson said, “My sister is a bit superstitious, like my mother was, and will wait until after the painting is sold.”

The Picasso and van Gogh were “part of the house,” said Payson. Asked to describe the difference between the two paintings, he laughed and said he was waiting for someone to ask. “It really is a case of apples and oranges. My mother considered them of equal importance. Even though they’re totally different paintings, I feel they’re both emotional. Van Gogh painted `Irises’ late in his career, when he was in the asylum in Saint-Remy, while Picasso was quite young.”

“Au Lapin Agile” was painted by Picasso for the owner of the cafe bearing the same name in Montmartre, near the artist’s studio, Bateau Lavoir. It may have taken some inspiration from the sign hanging outside, illustrating a rabbit dancing in a saucepan. The proprietor, Frederic Gerard, is in the background, strumming his guitar and seemingly tapping out the rhythm with his wooden clogs. The painting hung on the back wall of the cafe, which still exists in the same Parisian neighborhood where Picasso became fascinated with the circus and its performers that came to dominate his harlequin, or rose period. Gerard sold the painting in 1912.

Picasso was a regular at the cafe and also painted the owner’s daughter, Margot, nuzzling her pet bird, in his 1904 pastel “Woman With a Crow,” now in the Toledo, Ohio, museum.

The artist’s pose, delicately gripping the stem of a bar glass and staring into space with a ghostly scowl on his face, is sparked by the beautiful woman seated next to him. She is pouting and painted in glaring red lipstick, and outfitted in a feather-bedecked brilliant orange jacket and elaborate hat. The model, Germaine Pichot, was the woman who had spurned Picasso’s closest artist friend from Barcelona, Carlos Casagemas. He had commited suicide over his unrequited love four years earlier. Though Picasso painted the popular model, it is clear in this allegorical composition that he can’t bear looking at her.

John Marion, chairman and star auctioneer of Sotheby’s New York, estimated that the picture “will generate the same level of interest among collectors” as the two Picassos that sold in the last year. So far in the category of most expensive pictures, “Yo, Picasso” stands second only to “Irises.” The cafe painting is much more complex and isunique for featuring the artist as harlequin. The picture resembles the famous bistro scenes painted by Toulouse-Lautrec, an early and fleeting influence on Picasso.

Sotheby’s will tour the painting internationally in a pre-sale exhibition in Madrid, London, Zurich and Tokyo before its arrival in New York.

This entry was posted in Auctions and tagged Pablo Picasso, Sotheby’s. Bookmark the permalink.