Skip to contentSkip to content
The Art Newspaper
Warhol’s Blue Marilyn sells for record-smashing $195m at Christie’s auction of Swiss dealers’ collection
May 10, 2022 by Judd Tully 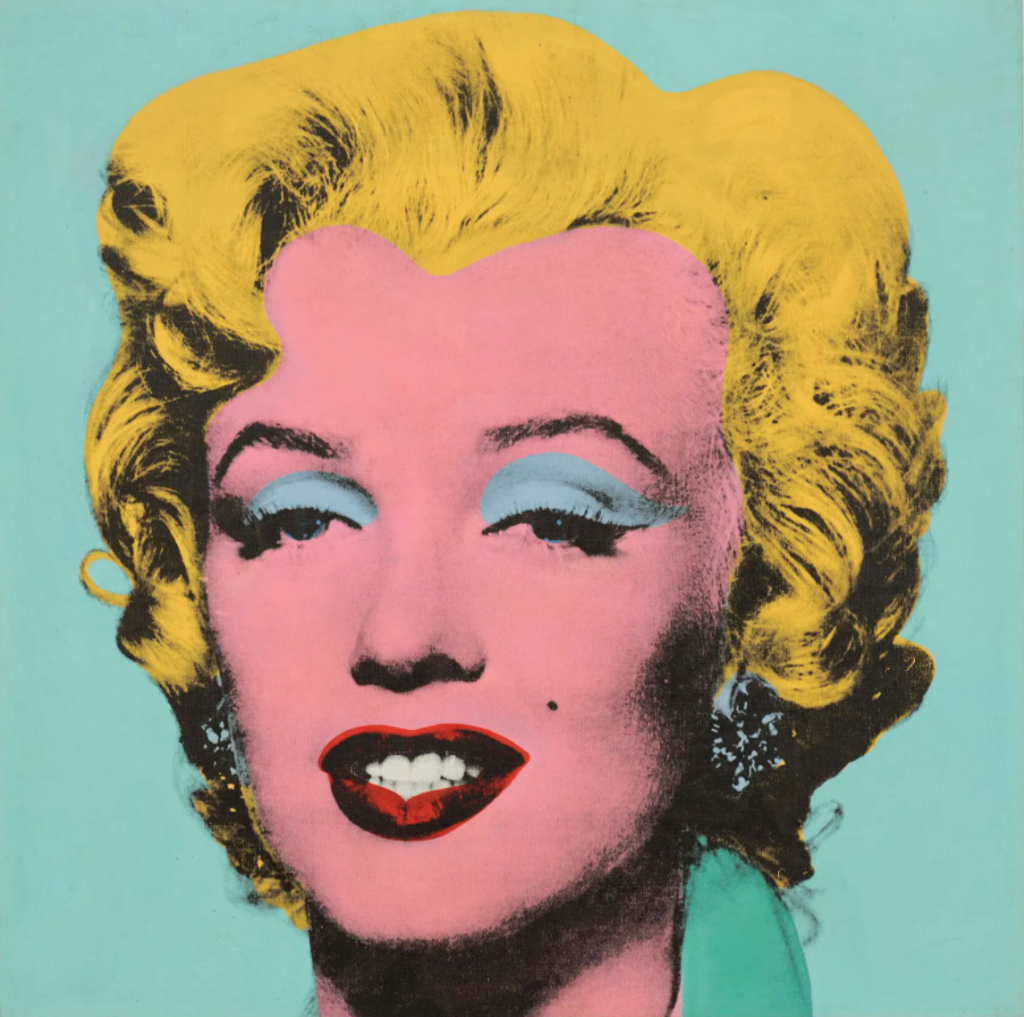 The collection of Thomas and Doris Ammann brought in $317.8m with fees, good for Christie’s forth-biggest single-owner sale ever.

Powered by an iconic, dazzling and record-breaking Andy Warhol portrait of screen siren Marilyn Monroe, which sold to the US dealer Larry Gagosian for $195m, the collection of the late Swiss art dealing siblings Thomas and Doris Ammann reached $273m ($317.8m with fees) at Christie’s New York on Monday night. Pre-sale expectations ranged from $284m-$420m, indicating in part the tumbling effect of a brutal day on Wall Street and across other financial markets.

Only two of the 36 lots offered went unsold for a slim buy-in rate by lot of six percent. There were no guarantees or third party backing, seemingly reflecting the confidence of the sellers. Seven artist records were set.

All of the net proceeds will benefit the recently established Swiss-based Thomas and Doris Ammann Foundation aimed at improving the health, welfare and education of underprivileged and at risk children.

The results made it the forth-most expensive single-owner evening sale at Christie’s, lagging far behind the $646.1 million tally of the collection of Peggy and David Rockefeller in May 2018—and last November’s first sale of the Macklowe Collection at Sotheby’s, which fetched (also with fees) $676.1 million.

The siblings established Thomas Ammann Fine Art AG in Zurich in 1977 and rapidly became a world-class dealership, specialising in the secondary market works of artists including Francis Bacon, Alberto Giacometti, Henri Matisse and Pablo Picasso, as well as Brice Marden and Andy Warhol.

The headline of a 1988 Vanity Fair profile on the charismatic Thomas, who began his art dealing career at age 18 with gallerist Bruno Bischofberger in Zurich, was titled “Ammann of Style” and described a jet-setting dealer who “lives on the Concorde”.

Ammann died of cancer at age 43 in 1993, at which time sister Doris took over the business and nimbly grew it—and was always granted a front row seat at auctions in New York, London and Paris. She died suddenly in March 2021 at age 76. 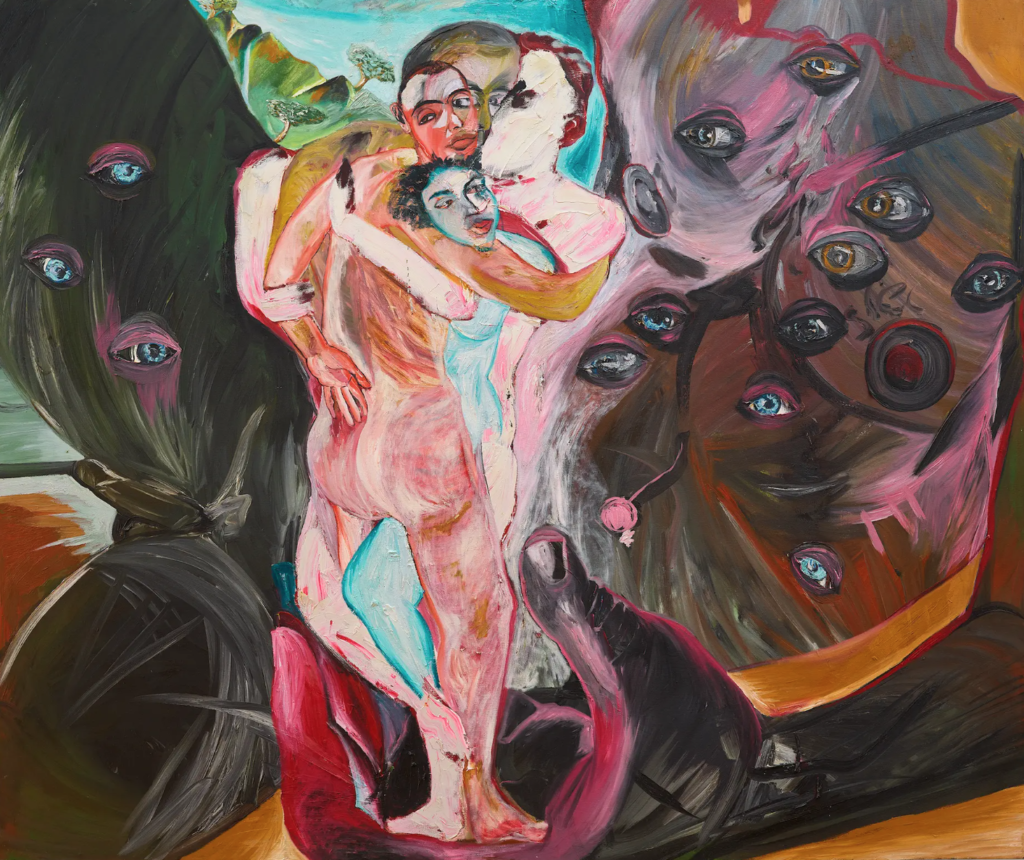 The atmosphere grew slightly more serious with the third lot, Francesco Clemente’s large-scale composition The Fourteen Stations, No. XI (1981-82) that sold to mega-collector Peter Brant for a record $1.5m (est $80,000-$120,000), or $1.8m with fees. Emblematic of the evening’s lots, the Clemente had royalty-lined provenance, starting with the Saatchi Collection.

A second and larger Ryman in oil on linen from around 1961, also Untitled yet hard to miss with its upper-right-hand quadrant dense with rich brushstrokes, sold to a telephone bidder for $17.2m (est $15m-$20m), or $20.1m with fees.

A second Twombly made hay with the early, 1955 Untitled, elegantly studded with graffiti markings and executed in a mélange of oil-based house paint, wax crayon, coloured pencil and lead pencil on canvas, also went to Gagosian, bidding from his third row, aisle seat for a hammer price of $18m (est $10m-$15m), or $21m with fees.

Though a relatively early and distinctly Minimal abstraction by Brice Marden, For Otis (Back Series) from 1967-68 and executed in oil and beeswax on canvas failed to sell (est $5m-$7m), a second Marden offering, Le Mien (1976), dominated by dark-hued vertical stripes, sold to (you guessed it) Gagosian for $7m (est $8m-$10m), or $8.4m with fees. 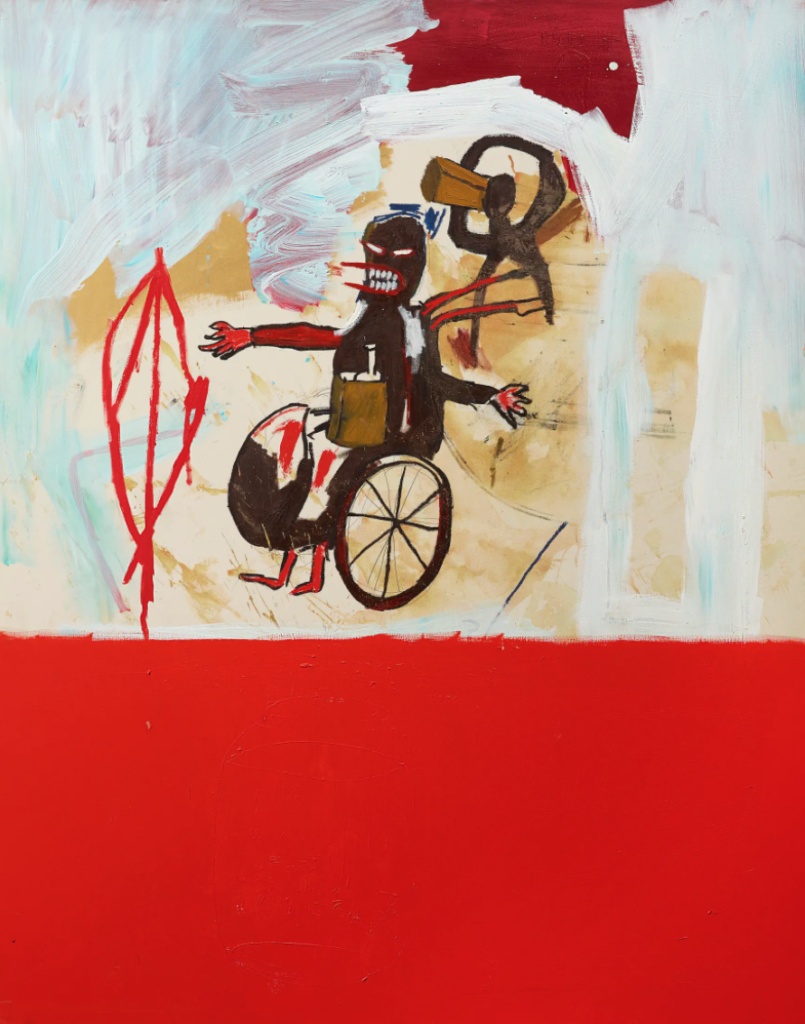 One of the evening’s most evocative lots, if by title only, Basquiat’s gritty His Glue Sniffing Valet (1984), depicting a scowling figure in a wheelchair with a standing figure behind, the face obscured by a paper bag went, for a $6m hammer price (est $6m-$8m), or $7.2m with fees. Ammann acquired the work from the Mary Boone Gallery in SoHo at the time of Basquiat’s first exhibition there.

Of the trio of Warhol offerings, two stood out, starting with the large-scale Flowers from 1964, bearing ghost-white petals and a dark green background. It hammered at $13.5m (est $15m-$20m), or $15.8m with fees. Amman acquired it at Sotheby’s in November 1983 when the pre-sale estimate was $50,000-60,000 and excitedly called the artist with the news. The conversation wound up in The Andy Warhol Diaries, first published in 1989 (and recently used as the basis for a Netflix documentary series of the same name).

The evening’s cover lot and perhaps the season’s most expensive trophy, was Warhol’s 40in square Shot Sage Blue Marilyn of 1964, so titled after Warhol Factory hanger-on Dorothy Podher who, clad in black leather and white gloves, entered the studio in Warhol’s presence that year, calmly took a pistol from her purse and shot a stack of variously single-coloured Marilyn canvases, accurately aiming for the starlet’s forehead.

The bidding battle opened at a gasp-producing $100 million and charged heavenwards to a record-shattering $170 million, selling to Gagosian. With fees, the sticker price came to $195m, against an unpublished estimate of $200m. It blasted past and almost doubled the previous Warhol record set at Sotheby’s New York in November 2013 with Silver car crash (Double disaster) (in 2 parts) from 1963, which fetched $105.4m. 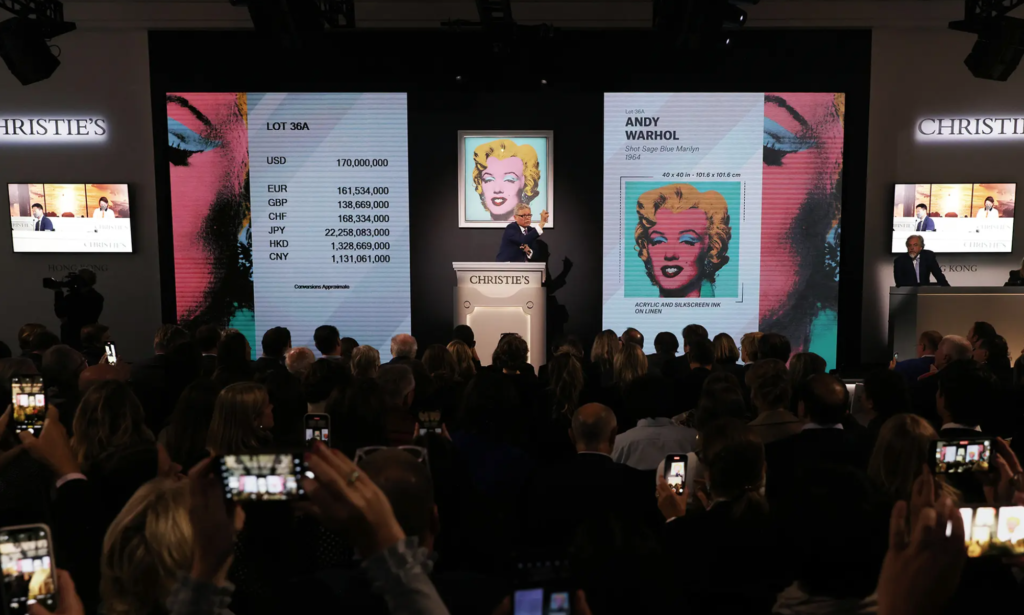 Of the small, same-size series of five, Shot Red Marilyn sold for $3.6m at Christie’s New York in November 1994. The sage blue version escaped damage from the famous shot.

It is understood that another variant, Orange Marilyn, also untouched by Podher’s bullet, was acquired privately four years ago by Chicago hedge fund magnate and collector Ken Griffin for $250m. It had previously sold as the cover lot for $17.3m at Sotheby’s New York in May 1998.

In any case, tonight’s Marilyn became the most expensive 20th century work to sell at auction, charging past Pablo Picasso’s Les Femmes d’Alger (Version ‘O’) from 1955 that sold at Christie’s New York in May 2015 for $179.3m with fees.

Christie’s had announced the new owner could select a charity of choice to receive 20% of the sale price, possibly offering another incentive to bid. Even given the huge price and charitable encouragement, some observers seemed disappointed the Warhol didn’t fly higher. “I think people expected a little bit more,” said dealer Per Skarstedt as he exited the Rockefeller Center salesroom.

The evening action continues at Christie’s 21st century sale on 10 May.