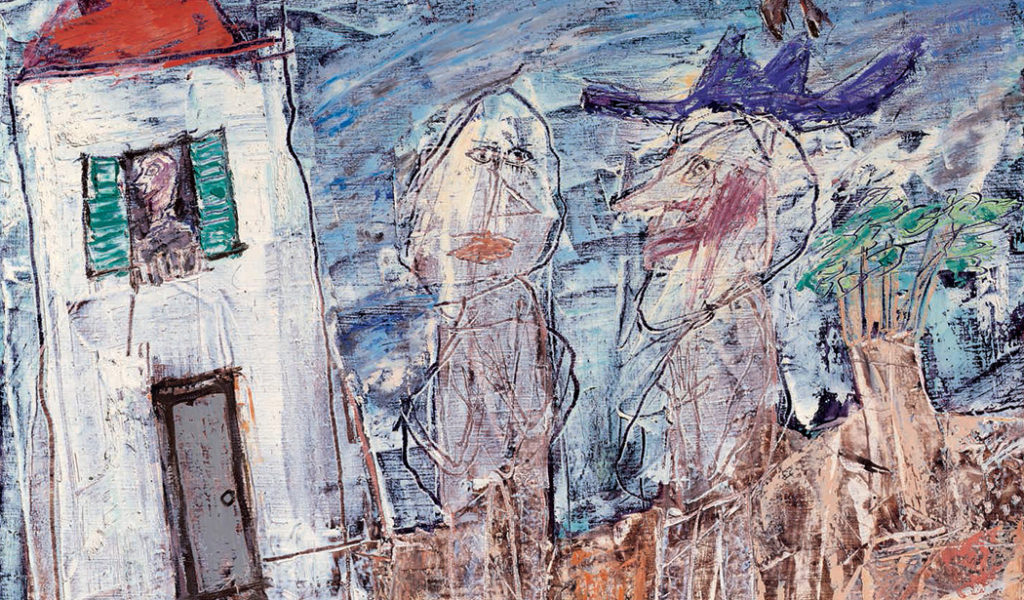 The private collection of Leslie Waddington, the late and legendary London dealer of modern and contemporary art, kicked off the week of contemporary auctions Tuesday evening with a “white glove,” 100 percent-sold-sale, realizing £28,285,525 million ($36 million) for the 44 lots sold.

Waddington, who died last November at age 81, was the epitome of the Cork Street dealer, the slice of Mayfair that until recently featured a colony of galleries devoted mostly to 20th Century Art. The Dublin-born and Sorbonne-educated son of dealer Victor Waddington opened his eponymous outpost on Cork Street in 1966 and quickly developed a full throated program of staging an eclectic mix of Abstract Expressionist, Pop, and Color Field artists, along with British artists such as Patrick Heron, Ivon Hitchens, and Patrick Caufield. On top of that visual soufflé, Waddington pursued top class secondary market works and sold the likes of Dubuffet, Leger, Matisse, Miro and Picasso.

His carefully assembled private collection reflects his unassailable taste as a dealer and that combination led to vigorous bidding throughout the 90-minute sale, with prices often doubling or tripling conservative estimates.

The price points climbed with a trio of Josef Albers color-charged abstractions, led by the 1969 work “Study for Homage to the Square: Containt” from lot 5 which realized £665,000 ($848,540) (est. £150-200,000). Despite stiff competition, the same unidentified buyer in the salesroom acquired all three Albers offered. Like many of the offerings, this example was studded with museum exhibition history, including the Solomon R. Guggenheim retrospective in 1988.

The market appeared feisty enough to absorb anything offered with the Waddington name attached, including the minimal and beautiful Agnes Martin acrylic- and pencil-on-canvas, six-foot square “Praise” from 1985, that brought in £2,853,000 ($3,640,428) (est. £2-3 million). It came to market perfectly timed for the Guggenheim’s Agnes Martin retrospective that opens on Friday.

Avant garde, Modernist works appeared to be especially desirable, such as Francis Picabia’s mechanistic portrait of sorts, titled “Lampe” (circa 1923), in watercolor, brush, India ink and pencil on paper, and mounted in its original Pierre Legrain frame. The Picabia sold to a bidder in back of the sales room for £3,637,000 ($4,640,812) (est. £800,000-1.5 million). It was first owned by famed Paris couturier and art collector Jacques Doucet, who once owned Picasso’s revolutionary Cubist work, Le Demoiselles d’Avignon from 1907.

“We were super-thrilled to get it,” said Asher, who bid on behalf of a private American collector with other Calders in his collection. “It was a very targeted sale,” added the advisor, “with a few special objects that connoisseurs and collectors chased.”

In that same rare hemisphere, Jean Dubuffet’s rambunctious 1955 composition, steeped in the beautiful light of the South of France, “Visiteur au chapeau bleu (Visitor with Blue Hat),” took the top lot and sold to another telephone buyer after a protracted bidding battle for £4,813,000 ($6,141,388) (est. £2-3 million).

On the lower price range, if there was one lot to describe or portray Waddington’s aesthetic and decades long joie de vivre, it was encapsulated in Sir Peter Blake’s postcard-sized oil-on0board portrait, “E.J. Power,” from 1989, featuring the whiskey bottle-bearing visage of that British collector and bon vivant, Ted Power.

American buyers or those bearing U.S. currency, held a distinct advantage as the British Pound, weakened post-Brexit, is a kind of market elixir for those holding dollars or other strong to pound currencies.

“There was very strong American bidding in the sale,” said Francis Outred, Christie’s chairman and head of Post-War/Contemporary Art Europe and beyond, “and you couldn’t ask for a better start of Frieze week,” referring to the annual tented art fairs in Regent’s Park that opens tomorrow to VIPs.