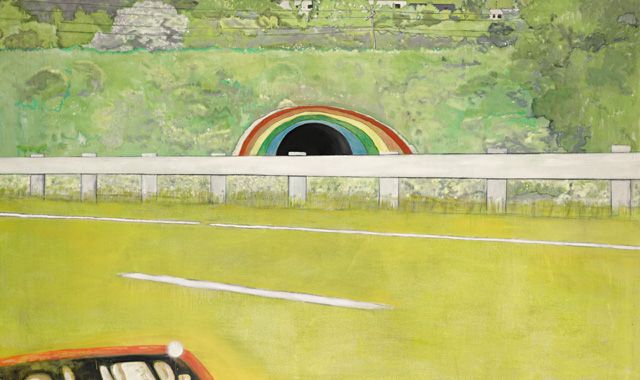 Peter Doig’s “Country-rock (wing-mirror)” 1999, part of Sotheby’s London Contemporary Art Evening Sale coming up on June 30, and estimated in the region of £9 million.

A major and fresh-to-market Peter Doig painting, “Country Rock (Wing Mirror)” from 1999, is heading to the auction block at Sotheby’s London on June 30 with pre-sale expectations in the region of £9 million ($15 million).

Acquired by the current owner in 1999 from Gavin Brown Enterprise in New York, where Doig debuted the work, the 77 by 106 inch painting is part of a small and celebrated series depicting a patch of highway outside of Toronto, where the Edinburgh-born artist used to live.

Doig, who has lived in Trinidad since 2002, painted “Country Rock” in London.

The picture shows a deceptively bucolic view through the passenger side window of a car (hence the title), with a rainbow-painted tunnel entrance visible on the other side of the guardrail and, around it, a gorgeous, Impressionist-style backdrop of dappled greenery.

The rainbow tunnel is a kind of folk art legend in itself, created first in 1972 by a graffiti artist B.C. (Berg) Johnson who obsessively returned to the Don Valley Parkway site to repaint the rainbow until he was served with an injunction by local authorities to keep away from the area.

“It’s the perfect piece,” enthused Cheyenne Westphal, the London based global co-head of Sotheby’s contemporary art, speaking of the Doig painting. “It’s a landscape, it’s got a real spring-summery feel to it. It’s the only one from the series that includes the wing mirror, so you really get a sense of the car driving by. It gives you the illusion really of this classic summer landscape, where in fact, he’s still on the outskirts of Toronto.”

Two other large-scale paintings from the series are owned by Victor Pinchuk: “Country Rock Version” from 2001-02, housed at the Pinchuk Art Centre in Kiev, and “Country Rock” from 1998-99, at the Ole Faarup Collection, Copenhagen. It was “Country Rock” from the Faarup Collection that was featured on the cover of the Tate Britain catalogue for Doig’s 2008 retrospective, another indicator of the importance of the series and of this painting’s rarity and stellar standing.

“Country Rock (Wing Mirror)” may be set to challenge the record.

“If you want to have a top ten Peter Doig images,” said Westphal, “it sits very highly.”