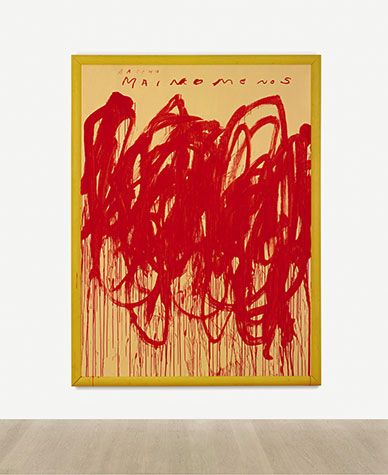 Frayed nerves and worries about a slumping contemporary art market seemed to evaporate in a round of hearty applause at Sotheby’s on Wednesday night, following a bravura and finely choreographed Contemporary Evening Sale that delivered $242,193,999.

The tally came close to the high end of pre-sale expectations of between $201.4 and $257.5 million, and only two of the 44 lots offered failed to sell, for a remarkably slim buy-in rate by lot of 5 percent. It was the lowest such rate for the house since November 2009. Thirty-two of the 42 works that sold on Wednesday made more than a million dollars, five made over $10 million, and two artist records were set.

(Reported prices include the tacked-on buyer’s premium for each lot sold, and are calculated on a sliding scale starting at 25 percent of the hammer price up to and including $200,000; 20 percent of any amount above $200,000 and up to $3 million; and 12 percent for anything above that. Estimates do not include the buyer’s premium.)

The evening got off to a rollicking start as Adrian Ghenie’s richly impastoed “Self-Portrait as Vincent van Gogh” from 2012, executed in oil on canvas and scaled at just 19 by 12 inches, sold to Tokyo collector Yusaku Maezawa for a whopping $2,590,000 (est. $200-300,000). Maezawa had become a big and public player overnight, or so it seemed, after his $81 million buying spree at Christie’s on Tuesday evening, which included a record price for the artist of $57.3 million for a 1982 Jean-Michel Basquiat painting.

Next up was Rudolf Stingel’s “Untitled” self-portrait from 2007, sourced from a posed black and white photograph of the bearded artist hidden behind aviator sunglasses and executed in oil and enamel on canvas, sold to New York private dealer Neal Meltzer for $2,950,000 (est. $1.5-2 million). London dealer Hugh Gibson was the underbidder, one of at least four bidders who chased the 15 by 20 ½ inch Stingel.

Peter Doig’s seemingly conventional landscape, “High-Way” from 1999, depicting the a rainbow-wrapped tunnel entry adjacent to the Don Valley Parkway near Toronto, sold to London private dealer Rory Howard for $3,946,000 (est. $2-3 million). “It’s a jewel,” said Howard as he dashed out of the salesroom.

The Doig was backed by a Sotheby’s guarantee, one of eight house guarantees in the sale that representing a combined value of $57.5-72.7 million. At least in the case of the Doig, it was a winning bet for the house, which gets extra juice for overachieving property that carries a guarantee.

A larger version of the painting, “Country-rock (wing-mirror)” from the same year but more than twice the size, sold at Sotheby’s London in June 2014 for £8.5/$14.5 million.

The Calder, gifted by the artist to Barr in 1966, was backed by a Sotheby’s guarantee, and the unadorned Stella was inscribed “To Alfred Barr…an unsolicited gift for giving me a show at MOMA” on the overlap of the canvas.

Some of the major action of the evening came early, with Francis Bacon’s searing but beautiful “Two Studies for a Self-Portrait” from 1970, each of whose 14-by-12-inch panels depict the artist in a black jumper, set against a lilac colored background. It sold to the telephone after a protracted bidding battle for $34,970,000 (est. $22-30 million). London gallery Gladwell & Patterson was the underbidder.

The work’s left-hand panel is a straight-on though classically distorted view of Bacon, while the right-hand panel shows the 61 year old artist inthree-quaters view, his features exquisitely distorted and smeared with squeezed paint as if transformed by a deranged Hollywood make-up artist.

It had originally been sold by London’s Marlborough Fine Art in 1970 to tonight’s seller, and is included in the forthcoming Bacon catalogue raisonné edited by Martin Harrison. It was also included in the artist’s seminal retrospective at the Grand Palais in Paris in 1971, and is one of only three self-portrait diptychs at this sought-after scale.

Other high value lots were sprinkled throughout the unquestionably successful evening, including Andy Warhol’s eerie and death mask-like “Self-Portrait (Fright Wig)” from 1986, in acrylic and silkscreen ink on canvas, which sold to a telephone bidder through Patti Wong, the Hong Kong-based chairman of Sotheby’s Asia, for $7,698,000 (est. $7-10 million). The 40-by-40-inch green-hued canvas, formerly in the collection of playboy and connoisseur Gunter Sachs, had last sold at auction at Christie’s London in December 1998 for $662,610, as part of a diptych with an identical panel in pink.

This time the single painting came to market with a combination house guarantee and a so-called irrevocable bid, meaning a third party had pledged a minimum bid, in this case aided by Sotheby’s, to meet the undisclosed reserve price.

Color played a big role in Cy Twombly’s cover lot, “Untitled (New York City)” from 1968, one of the artist’s celebrated “blackboard” paintings suffused with neatly arranged rows of chalk like looping spirals. It is the sole work in the series with distinct blue lines as opposed to white.

It sold on what appeared to be a single telephone bid, again through Patti Wong, for the top lot price of $36,650,000 (unpublished estimate in the region of $40 million). The seller acquired the 60-by-68-inch work from the Leo Castelli Gallery in November 1968 for $2,600, according to Castelli archive records. It has never been publicly exhibited or loaned, and was making its first outing during the Sotheby’s preview, both at the York Avenue headquarters and in an international tour to Los Angeles, Hong Kong, and London.

Another Twombly, the late and baroquely grand “Untitled (Bacchus 1st Version V)” from 2004 — an explosion of red acrylic, wax crayon and oilstick on wood that is much larger, at 104 ¾ by 79 inches — sold to private dealer Michaela de Pury for $15,370,000 (unpublished estimate in the region of $20 million). Its only previous public showing had been in Moscow in 2008 at the Red October Chocolate Factory exhibition organized by Gagosian Gallery. It carried an irrevocable bid.

On the heels of last evening’s record for a Jean-Michel Basquiat painting, Basquiat’s “Onion Gum” from 1983, consisting of acrylic and oilstick on canvas and bristling words and phrases including “onion gum makes your mouth taste like onions,” sold to another telephone bidder for an underwhelming $6.6 million (est. $7-10 million). It was also backed by an irrevocable bid, and had last sold at Sotheby’s New York in November 2012 for $7,362,500, meaning Wednesday’s sale represented a paper loss for the seller.

Text was also a crucial element in Christopher Wool’s striking “Untitled” from 1990, a large-scale composition in enamel and acrylic on aluminum with huge stenciled black letters on a white ground spelling out CHAMELEON across three rows. It sold to Maezawa via the telephone for $13,914,000 (est. $14-18 million).

In a similarly dramatic graphic style but from a much earlier time, Franz Kline’s brawny, action painting abstraction “Elizabeth” from 1961, executed in oil on canvas, realized $7,978,000 (est. $8-12 million). Named after the artist’s ballerina wife, Elizabeth Parsons, the composition practically leaps off its stretcher bars. It too was backed by a house guarantee.

In stark contrast to Kline’s aggressive black lines, the sublime Sam Francis painting “Summer #1” from 1957 was awash in a luminous frenzy of color. It sold to Los Angeles collector and museum patron Eli Broad for a record $11,842,000 (est. $8-12 million), and like the majority of the first rate properties on Wednesday came with a house guarantee.

“It’s a great work,” said Broad as he tried to get past a gaggle of trailing journalists, “and we’ve got five or six Francis paintings.”

He added that he’d been chasing a Francis from this desirable series for years.

Ab-Ex era sculpture was also on offer, led by David Smith’s stunning and free-standing “Zig 1” from 1961, in painted, welded steel, which sold to a telephone manned by Amy Cappellazzo, Sotheby’s newly appointed chairman of the global fine art division, for $9,210,000 (est. $8-10 million). It hailed from the notable Miami-based Irma and Norman Braman Art Foundation.

Smith’s painted sculptures are rare to market, especially since the infamous meddling of Smith’s one-time executor Clement Greenberg, who disliked the paint element and had some of the sculptures stripped of color. It was a colossal error and abruptly ended Greenberg’s involvement with the Smith estate.

On the European front, a rare and first-rate Alberto Burri, “Sacco” from 1954 — oil and burlap on canvas stretcher — looking war ravaged and wounded, sold to Los Angeles dealer Stavros Merjos for $7,306,000 (est. $6-8 million.) The late and famed Chicago collector Morton Neumann had acquired it from the Martha Jackson Gallery in 1957 and it has been with the Neumann family collection since.

“A lot of us were worried coming into the sale,” said Miami-based collector and artists’ patron Don Rubell as he headed towards the elevator bank and the exit in the immediate aftermath of the auction. “But it was a phenomenal result with a lot of really deep bidding.”

Nearby, Nancy Whyte, the underbidder on Barr’s Calder, reaffirmed the positive, saying “you felt like you were in a real auction.”

The packed week of evening sales hits the finish line on Thursday at Christie’s Impressionist and Modern sale.