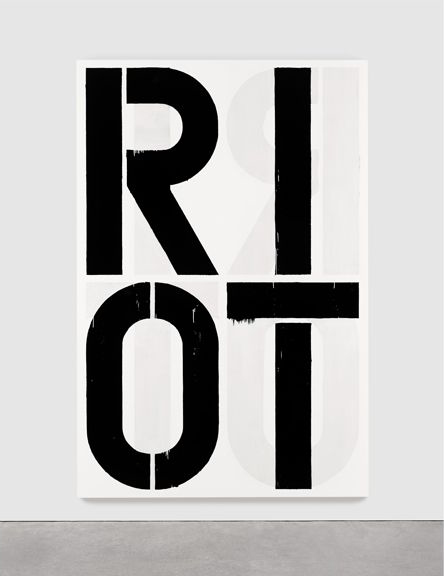 Buoyed by a quartet of $20 million plus lots, the contemporary art market once again proved its marathon mettle in Sotheby’s season opener evening sale on Tuesday, which tallied $379,676,000.

The result, second only to Sotheby’s $380.6 million contemporary evening sale in November 2013, came comfortably midway between the $315.1-411.2 million pre-sale expectations for the 63 lots offered. Fifty-five of those sold for a crisp sale through rate of 88.7 percent by lot, with just seven offerings failing to find buyers. Nine lots sold for over $10 million and 40 sold for over $1 million. Seven artist records were set. The result also nicked last May’s $364,379,000 total for the 67 sold lots.

Prices reported include the buyer’s premium added on to the hammer price for each lot sold and calculated at 25 percent up to and including $200,000, 20 percent of any amount above that and up to $3 million, and 12 percent for anything in excess of $3 million. Estimates do not reflect the buyer’s premium.

The evening got off to a super-charged, charitable start with nine artist, gallery, and patron donated works offered to benefit the still struggling Museum of Contemporary Art in Los Angeles and led off by (lot 1) Mark Bradford’s 96 by 72 inch mixed media abstraction, “Smear” from 2015, which sold to an anonymous telephone bidder for a record $4,394,000 (est. $500-700,000).

On the various owners’ front, (lot 3) Frank Stella’s large, concentric square and prismatic abstraction “Sacramento No. 6” from 1978 sold for $3,070,000 (est. $2-3 million), underbid by New York art advisor Kim Heirston and French dealer/collector John Sayegh-Belchatowski. The Stella last sold at Christie’s New York in May 2004 for $444,300. It was backed in part by a so-called irrevocable bid, meaning a third party outside Sotheby’s made a sufficient offer prior to the sale that would be enough to win the lot if no other competition arose.

There were 19 lots carrying full-on house guarantees, irrevocable bids, or combinations of the two, according to Sotheby’s, a significant number indicating the increasing financial complexity and last minute deal-making that rules the auction market. The array of those guarantees represented $230 million of the evening’s tally.

“Untitled,” (lot 4) Cy Twombly’s calligraphic blackboard painting rendered in oil and chalky wax crayon on two sheets of paper from 1970 realized $5,066,000 (est. $4-6 million) and was backed by an irrevocable bid.

Sotheby’s also sourced a last minute combination of a house guarantee and an irrevocable bid for Andy Warhol’s (lot 6) “Superman” from 1981, an homage of sorts to actor Christopher Reeve and a reprise of the artist’s early and storied 1961 comic book painting. It sold to Jose Mugrabi for $14,362,000 (est. $6-8 million). It was included in the traveling museum retrospective in 1989-90, organized by the Museum of Modern Art, in what turned out to be a posthumous affair after Warhol’s untimely death in February 1987 at age 58 following routine gall bladder surgery.

The sale featured four other works by Warhol, including the red lipstick glossed (lot 19) “Mao” from 1973, set against an electric blue background, which sold to a telephone bidder for $14,474,000 (est. $13-16 million). It last sold at Phillips de Pury in New York in November 2012 for $13,522,500, an uptick barely enough to cover inflation. Tonight it carried a combination guarantee and irrevocable bid.

Surprisingly, or so it seemed at first blush, a genuinely rare-to-market Pop Art classic, the cover lot Roy Lichtenstein (lot 15) “The Ring (Engagement)” from 1962, most recently exhibited in the 2012-13 traveling Lichtenstein retrospective, sold well under estimate to a telephone bidder handled by Patti Wong, Sotheby’s Hong Kong-based chairman of Asia, for $41,690,000 (unpublished estimate in the region of $50 million). Consigned by storied Chicago collector Stefan Edlis, who bought the painting at Sotheby’s New York in November 1997 for $2,202,500, the comic book poached image carried a full house guarantee.

“I thought it was a very important painting, from an important series and a big size, but it’s not a painting for everyone,” said New York dealer Christophe van de Weghe, who watched the tame bidding action but didn’t raise a hand. “Still,” the dealer added, “it’s not going to be easy to find another 1962 Lichtenstein painting on the market.”

It’s unclear how much money, if any, Sotheby’s lost on its guarantee to Edlis, one of the savviest collectors around.

Another Lichtenstein offering, (lot 14) “Vicky!! I THOUGHT I HEARD YOUR VOICE! (STUDY)” from 1964, a petite but gorgeous drawing in color pencil and pencil on paper, sold to Geneva dealer Marc Blondeau for $1,270,000 (est. $1.2-1.8 million).
Asked about the sale as he darted for the bank of Sotheby’s elevators, Blondeau opined, “It’s quite successful tonight and there’s more free competition than last night’s auction,” referring cryptically to Christie’s blockbuster “Looking Forward to the Past” sale.

Even so, there seemed little resistance to newly minted, sky-high estimates on favorite brand artists, as amply illustrated by Christopher Wool’s (lot 7) “Untitled (Riot)” painting from 1990 and trophy scaled at 108 by 72 inches. The broken text enamel on aluminum painting, one of only six from the series, sold to a telephone bidder for a record shattering $29,930,000 (est. $12-18 million) and was consigned by the unnamed collector who acquired it on the primary market in 1991. New York private dealer Philippe Segalot was the underbidder who outgunned dealer Larry Gagosian in that protracted bidding battle.

“Untitled (Fool),” another Wool painting of the same size and date from that small series, sold at Christie’s New York last November for $12.5 million hammer to John Sayegh-Belchatowski, who crowed shortly after “Riot” went off the charts, “It’s my revenge and thank you Sotheby’s.”

New price points were also established for the slim corral of undervalued artists that trade in this arena, including (lot 8) Sigmar Polke’s stunning composition “Deschungel (Jungle)” from 1967 and executed in dispersion on canvas, which sold to a telephone bidder for a rousing and record $27,130,000 (unpublished estimate in the region of $20 million). Larry Gagosian was the underbiddder. It last sold at Sotheby’s London in June 2011 for a then record £5,753,250/$9,207,501.

The stratospheric stature of the work of Ab-Ex master Mark Rothko retained its trophy status allure with (lot 11) “Untitled (Yellow and Blue)” from 1954, a shimmering and color-charged composition scaled at 95 5/8 by 73 1/2 inches. It sold as the evening’s top lot to another telephone bidder for $46,450,000 (est. $40-60 million). It came to market with an irrevocable bid and a fascinating provenance in that it formerly belonged to Christie’s owner Francois Pinault, who exhibited it at Palazzo Grassi in 2006 in the exhibition “Where Are We Going? Selections from the Francois Pinault Collection.” (The answer: to market, to market.) Pinault had acquired the Rothko as well as two others from Rachel “Bunny” Mellon, the widow of philanthropist Paul Mellon, in an undated private transaction, and subsequently sold this beautiful example to tonight’s consignor. Sotheby’s, serially haunted by Christie’s dominance in the Post-War/Contemporary field, must be chuckling in its resale coup. The radiant image, in pale gold and sea blue colors, exudes a magisterial and meditative atmosphere.

In the same Ab-Ex neighborhood, a small but potent Jackson Pollock square format composition on Masonite, (lot 31) “Number 12, 1950,” staccato splattered in oil, enamel, and aluminum paint, sold to a telephone bidder for $18,282,000 (est. $15-20 million). In that same revered camp, Willem de Kooning’s (lot 38) relatively late and decidedly luscious “Untitled” painting from 1977 sold to the telephone for $6,074,000, painfully shy of its $8-12 million and guaranteed by Sotheby’s.

On the European, Postwar side, Yves Klein’s (lot 33) sponge and pebble studded abstraction, “Accord Bleu (RE 52)” from 1958 and boasting the artist’s patented IKB dry pigment on board, realized $8,986,000 (est. $8-12 million). It last sold at Christie’s New York in November 2012 for $7,586,500, testing the investment strategy that some folks see as treating art as an alternative asset class. It remains a risk-tinged investment.

Back to these East Coast shores, Jean-Michel Basquiat’s (lot 27) early, pugilist inspired composition “World Crown” from 1981, featuring a skeletal pair of boxing gloved contestants duking it out, sold to a telephone bidder for $11,450,000 (est. $7-10 million) and was consigned by the collector who bought it from the Gracie Mansion Gallery in 1981.

On a smaller (lot 10) and almost old-fashioned note, “White Yellow,” an early and rare-to-market Ellsworth Kelly painting from the collection of Parisian Marcel Brient and dated 1957, sold to New York-based art advisor Liz Klein for $1,210,000. Christophe van de Weghe was the underbidder.

“They’re rare,” said Klein as she exited the packed salesroom, “and a lot of the early work is in museum collections. He’s certainly one of the important living American artists.” Asked about the tenor of the sale, Klein, who bought the Kelly for an American client, noted, “There’s a lot of money sloshing around and it’s difficult for traditional collectors who’ve been around to compete for material. It’s a pay to play world now.”

The evening action resumes at Christie’s on Wednesday with Postwar and Contemporary art.