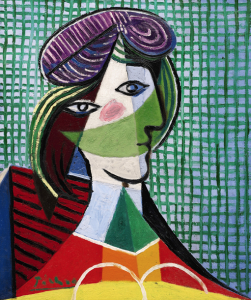 On the upside, 18 lots sold for more than a million pounds on Wednesday, and of those five exceeded £5 million; 24 lots sold for over a million dollars and five made more than $10 million. Two artist records were set.

Trouble, as it were, started early, with Franz Marc’s trio of handsome horses prancing in a pasture, “Grosse Landschaft I/Large Landscape I” from 1909, which flopped at £3.5 million (est. £4-6 million).

An earlier and rougher Picasso, “L’Etreinte forcée”, a pastel on board from the artist’s early Paris days of 1900 and rather graphically depicting a man’s unwanted embrace of a woman, sold to New York dealer Jose Mugrabi for £725,000/$1,043,855 (est. £700,000-900,000). (Auctioneer Henry Wyndham, peering down from the auction podium at the buyer, declared to the famous dealer, who eschews a registered bidding paddle, “I think we know who you are.”)

Remarkably, the price was far below the $39.9 million result it achieved when it last sold at Sotheby’s New York in November 2013.

“The reality,” opined dealer Christophe van de Weghe, who attended both the 2013 sale and the one tonight, “is that this painting is worth $24 million” — Wednesday’s hammer price before premium — “and it’s a lot money. Before, it was a case of two people bidding at auction against each other and the price was completely cuckoo.”

Overall, as van de Weghe pointed out, “if you look at what happened in January on Wall Street, this sale is extremely positive.”

One interesting aspect of the auction was the relative absence of financial guarantees, either directly from Sotheby’s or anonymous third parties. (One of the few was a so-called “irrevocable bid” carried by Picasso’s “Le Reservoir” from 1950, a depiction of the beautiful Mediterranean town of Vallauris, which sold for £2,781,000/$4,004,084 [est. £2.5-3.5 million].) Say what you might about this sale, it was mostly free of behind-the-scenes financing and therefore more truly reflective of where the market stands.

Like a number of high-stakes entries on Wednesday, the painting apparently had its reserve, the secret minimum price for which the seller will allow the work to sell, revised downward prior to auction. Estimates printed in the catalogue were determined in late 2015, before the financial markets went south. Revised reserves are one way to save a work from a buy-in.

There was zero hesitation during the longest bidding battle of the evening for Auguste Rodin’s erotically positioned “Iris, messagère des dieux,” a 32-inch life-time bronze cast from between 1902 and 1905 that sold to a tenacious bidder in the room who beat out several telephones for a record (in pounds) £11,573,000/$16,662,805 (est. £6-8 million).

The sculpture sold to dealer/advisor Ben Frija of Copenhagen’s Galleri K, bidding on behalf of a private European collector. “It’s an extremely rare life time cast of this highly desirable ‘contemporary’ work,” said Frija after the sale. “Along with The Thinker it is Rodin’s most powerful work.”

The price realized for the suspended and headless female figure, certainly one of Rodin’s most daring sculptures, demonstrates how far the market can still go for desirable and rare works.

In the separate-catalogue Surrealist Art portion of the evening, René Magritte’s fantastical gouache on paper “Sheherazade” from 1956, depicting a woman’s face and figure with an elaborately constructed strand of painted pearls, made £785,000/$1,130,243 (est. £500-700,000).

“Overall, I was actually really pleased with the results,” said Helena Newman, chairman of Sotheby’s Impressionist & Modern Art Europe, “because we had five lots that sold above 10 million and I think it demonstrated a kind of well-functioning, solid market with confidence to bid at these levels, and showing a continuing appetite.”

As Newman accurately observed, “there was a lot of anticipation about how these sales would perform and altogether, it was reassuring and solid.”

The evening action resumes with Post-War and Contemporary Art at Christie’s London on Tuesday.