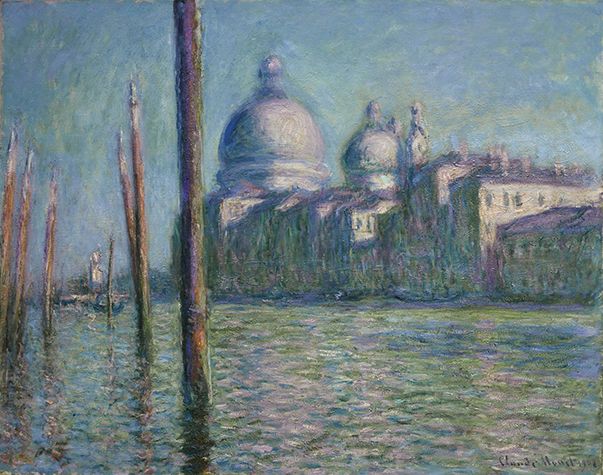 Eleven of the 75 lots offered failed to sell, for a trim buy-in rate by lot of 15 percent. Thirty-nine lots sold for over a million pounds and 48 hurdled the million-dollar mark. Five lots exceeded ten million pounds, while nine broke the ten-million-dollar barrier.

Impressionism proved to be a strong suit in the broad array of offerings, including five works by Claude Monet, of which two were consigned by an otherwise anonymous American collection. All in, they brought £55.7 million.

Monet’s lushly brushed “Les Peupliers a Giverny,” from 1887, deaccessioned by the Museum of Modern Art to benefit its acquisitions funds and also guaranteed with what Sotheby’s describes as an “irrevocable bid” from an outside third party, didn’t fly so high, selling for £10,789,000/$16,212,630 (est. £9-12 million). Sotheby’s identified the underbidder as the illusionist David Copperfield.

The Monet parade ended with “L’Embarcadre” from 1871, the early riverside scene observed, accoding to some art historians, at Zaandam in Holland rather than by the Seine. It sold for £10,229,000/$15,371,118 (est. £7.5-10 million), after three telephone bidders aggressively chased the painting. It had last sold at Sotheby’s New York back in the art boom bubble of May 1989 for $11 million.

“It was a great piece,” said Seydoux as he raced out of the salesroom, late for a dinner, “we just got outbid.”

The figure of the boy in the Seurat drawing is related to the artist’s famed “Une baignade Asnieres” at London’s National Gallery, where the same figure is posed with his hands clasped to his mouth.

Another Matisse entry, the sultry and close up “Odalisque au fauteuil noir” from 1942, painted in Occupied France but seemingly shielded in a fantasy bubble, sold to New York private dealer Nancy Whyte for £15,829,000/$23,786,238 (est. £9-12 million). London dealer Angela Neville was an underbidder.

“It’s got everything you want in a Matisse,” said Whyte immediately after the sale: “the Odalisque, the interior, the patterns — it’s a classic.”

The painting, one of the relatively few major lots free from financial guarantees, had last sold at Christie’s London in June 2004 for £6.6 million.

If there was any question about whether the declining ruble has hurt the value of Russian art, the sale of Kazimir Malevich’s 1909-10 “Self-Portrait” in watercolor, gouache and pencil on paper put an end to it. It went to London’s Harry Blain for £5,749,000/$8,639,022. Cologne private dealer Alex Lachmann was the underbidder. The work had last sold at Christie’s London in February 2004 for £162,050.

“It’s an important piece but a crazy price,” said the dealer as he left the salesroom. “I didn’t expect it to go so high.”

Sculpture was also part of the mix as Auguste Rodin’s “Le Penseur, taille de la porte et moyen modele,” a posthumous bronze cast from the 1880 conception, soared past expectations and sold to Wentworth Beaumont of London’s Beaumont Nathan for £6,309,000/$9,480,534 (est. £3-4 million). The guaranteed lot was a winning bet for Sotheby’s.

A familiar-looking Pablo Picasso iron and steel “Tête (Maquette pour la sculpture en plein air du Chicago Civic Center)” from 1962-64, offered from the Jan Krugier estate, made £8,885,000/$13,351,490 (est. £5-7 million). The distinctive study for the grand outdoor public work in Chicago was last offered at Christie’s New York in November 2013, when it went unsold against a sky-high and unobtainable $25-35 million estimate. On Tuesday it found its correct price.

The evening also included a separate-catalogue Surrealist Art sale, led in part by the René Magritte cover lot, “L’Explication” from 1952, dominated by a trio of phallic shaped objects planted on a wood grained table and set against open French shutters and more of Magritte’s optical effects. It sold for £3,733,000/$5,609,579 (est. £4-6 million).

“We got a great price for our European client,” said McNerney as he joined the swarm of departing auction goers. “It’s one of the better ones you can get these days.”

One of the few casualties was Paul Delvaux’s mural-scaled “Le train bleu or La rue aux tramways” from 1946, depicting an array of bare-breasted women seemingly waiting by the cobblestoned tramway. It died before the tram arrived at an imaginary £2.2 million. (est. £2.5-3.5 million). It had last sold at Sotheby’s London in November 1988 for £924,000.

The evening action resumes at Christie’s on Wednesday.