Skip to contentSkip to content
Artnews
Sotheby’s Hauls in $341.9 M. at Contemporary Auction, with SFMOMA’s Rothko Selling for $50.1 M
May 17, 2019 by Judd Tully 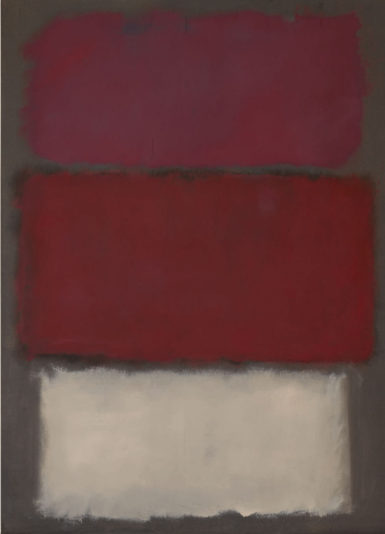 Even as a U.S.–China trade war rages and the stock market continues through a volatile stretch, the contemporary art market is continuing to show unrelenting strength, as evidenced by a season-ending auction at Sotheby’s New York on Thursday evening that brought in $341.9 million.

That tally edged toward the high side of pre-sale expectations of $244.6 million to $351.6 million. (Estimates do not include the buyer’s premium, and the hammer total was $291.6 million.)

Only seven of the 63 lots offered failed to sell, for a crisp buy-in rate by lot of 11 percent.

The solid result, which ranks as the 11th-most-expensive contemporary art evening sale in history, easily eclipsed last May’s $283.2 million total for 46 lots sold, which was led by Jackson Pollock’s Number 32, 1949 selling for $34.1 million.

Fifty-three of the 56 lots that sold made over $1 million dollars; of those, eight exceeded $10 million, and two hurdled the $50 million mark.

In terms of pre-sale financing of certain lots, 18 had so-called irrevocable bids, a form of third-party backing that entitles the funder to a financing fee, and one had a house guarantee. In both scenarios, the seller is assured of a minimum price no matter what occurs in the salesroom.

Fellow California painter Wayne Thiebaud came next with a page-sized 1962 oil painting, Four Pinball Machines (Study), which sold to the telephone for $3.62 million (est. $2 million–$3 million). It last sold at auction at Sotheby’s New York in May 2011 for $3.44 million.

Still early in the sale, a mural-scaled Julie Mehretu abstraction bearing a kind of cinematic matrix of voluminous marks in ink and acrylic on canvas sold to another telephone bidder for $3.02 million (est. $2.5 million–$3.5 million).

In that same figurative vein, Dana Schutz’s massive, color-drenched, and deceptively bucolic composition, Civil Planning (2004), attracted another large group of bidders, and went to another telephone bidder, for a record $2.42 million. (est. $300,000–$400,000). The Schutz was backed by an irrevocable bid. 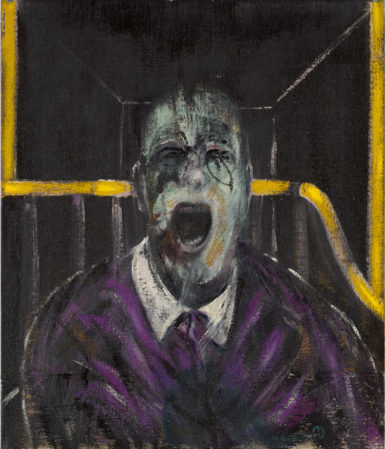 Four telephones vied for the stunning portrait until New York dealer Chris Eykyn entered the fray at $40 million and persevered to win it at the top-lot price of $50.4 million. (est. $20 million–$30 million). Judging by the speed of Eykyn’s incremental bidding, his client was willing to go higher.

Buttonholed for a moment as he left the packed York Avenue salesroom, he called the work “a once-in-a-lifetime opportunity.”

The picture hails from the Seattle collection of Richard Lang and Jane Lang Davis, who acquired it from Acquavella Galleries in 1975, when the top auction price for Bacon was below $200,000. It now ranks as the seventh-most-expensive Bacon to sell at auction, and given its relatively small scale of 26 by 22 inches, it is an especially huge price.

In becalming opposition to the Bacon, a darkly serene 1960 Mark Rothko abstraction, bearing the feathery touch of his brush, which was being deaccessioned by the San Francisco Museum of Modern Art to raise funds to diversify its collection, provoked another telephone bidding war and eventually went for $50.1 million (est. $35 million–$50 million).

As laid out in the catalogue, at the time of SFMOMA’s acquisition, in 1962, its then-director, George C. Culler, hammered out a swap with the artist, exchanging a “large, early oil” from his Surrealist period, given to the institution by Peggy Guggenheim, for a recent painting that Rothko himself chose. No money was exchanged, and SFMOMA paid for the transcontinental shipping.

The painting, one of 19 Rothko painted in 1960, is comprised of three stacked and floating rectangles of color, the top-most form made of a smoldering shade of red.

It last appeared in public in 2008 at Haunch of Venison Gallery in New York, then a wholly owned subsidiary of Christie’s, in “Abstract Expressionism: A World Elsewhere,” which was curated by Ab-Ex scholar and Rothko catalogue raisonné author David Anfam.

The exhibition included, it turned out later, a fake Barnett Newman painting, courtesy of the Knoedler Gallery, which was eventually implicated in a huge art-fakery scandal that led to its abrupt demise in 2011.

The Frankenthaler, which last sold at Christie’s New York in May 1980 for $38,000, was fresh-to-market, and saw a deep field of bidders.

Both the Frankenthaler and the Noland were part of a group of paintings from the collection of Blema and H. Arnold Steinberg that also included two Rothkos from 1969: Untitled (Red on Red), in oil on paper mounted on canvas, which sold for $8.24 million (est. $7 million–$10 million), and Untitled (Red and Burgundy over Blue), in the same medium, which realized $10.5 million (est. $9 million–$12 million). The Steinberg group tallied $35.4 million.

Generally speaking, “the bigger, the better” seemed to be an underlying for the night. Lee Krasner’s 92 ¾-by-191 7/8-inch swirling painting The Eye is the First Circle (1960) sold to dealer Robert Mnuchin for a record-shattering $11.7 million ($10 million–$15 million).

As you may recall, Mnuchin also bought Jeff Koons’s Rabbit (1987) at Christie’s on Wednesday evening for $91.1 million, a record for a living artist. 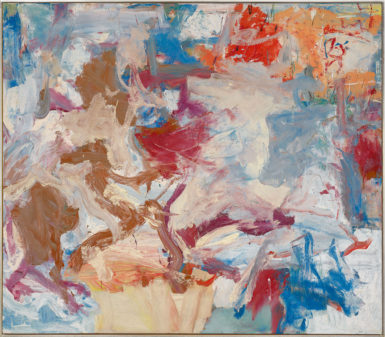 In sharp contrast to the searingly black Motherwell, Willem de Kooning’s Untitled X (1975) delivers a color-charged medley of maroon, orange, and blue against milky white passages. Fresh to market, from an owner who acquired it from New York dealer Xavier Fourcade in 1983, the painting went for $12.6 million (est. $8 million–$12 million).

It came to market naked, meaning without a reserve, and apparently too soon for the seller to wring out a profit.

Other highlights included Mark Grotjahn’s Face No. 1 (2004), from the estate of David Teiger, which realized $3.38 million (est. $3 million–$4 million), and another Teiger entry, Jenny Saville’s completely startling Reflective Flesh (2002–03), which made $2.78 million (est. $2 million–$3 million). Both works were backed by irrevocable bids.

In the silly department, until you decide to take it seriously, Brooklyn artist KAWS (Brian Donnelly) made his evening-auction debut at the house with his brazen and cartoonish KURF (Hot Dog), 2008, offered from a private Hong Kong collection.

It dashed, without a hint of exhibition history, to $2.66 million (est. $1.5 million–$2 million), representing a slice of the market that is brimming with speculators and hungry buyers looking for the next big thing.