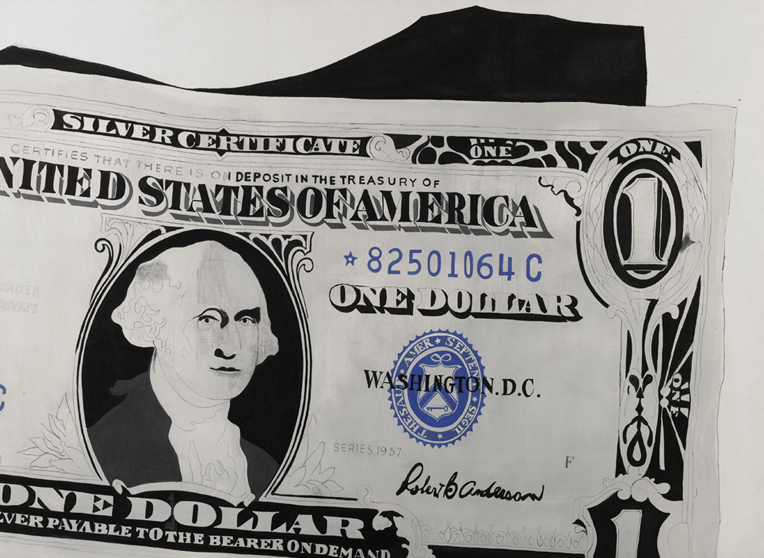 The protest was about wages and sick pay for Sotheby’s cleaners and porters, and added a jarring note to a highly anticipated auction that ultimately realized £130.3/$204.7 million, the firm’s highest total for a contemporary art sale in London. The tally came close to the London record of £132.8 million set by Christie’s sale of Post-War and Contemporary Art in June 2012.

In spite of the record, the result failed to meet pre-sale expectations of £142.2-202.6/$223.6-318.2 million on 58 lots offered. Nine of those 58 went unsold for what might have been a reasonable 15.5 percent buy-in rate by lot—except that three of those casualties carried a combined pre-sale low estimate of £43 million pounds.

Twenty-three of the 49 lots that sold went for over a million pounds, and 29 exceeded one million dollars.

Surprisingly, only four of the offerings were backed by financial guarantees, one from Sotheby’s and three others in the form of so-called “irrevocable bids” that guarantee a sale even if no other bidding emerges.

The guarantees add up to pre-sale estimates of £21.5-31 million.

Could this be the beginning of a Guarantee Lite Era?

London dealer Jay Jopling of White Cube was the underbidder.

The disembodied head with its three-pointed crown came to bat with an irrevocable bid backer. It had last sold at Sotheby’s London in February 2012 for £4,073,250, and made a fairly tidy return in just over two years.

“There’s very little on the market,” said David Juda, Hockney’s London dealer, shortly after the fireworks. “And everybody is looking for a Hockney landscape.”

He estimated the price achieved in the salesroom was about 30 percent higher than the amount he sold it for in the primary market.

It has last been offered at Sotheby’s London in June 2006, when it went unsold.

It was acquired by the Belgian collector Jacques Casier from the Marlborough Gallery in 1976, and has not been shown in public since, or hadn’t until Sotheby’s placed it on view this year.

Bacon had told the critic David Sylvester in 1975, “I’ve done a lot of self-portraits, really because people have been dying around me like flies and I’ve had nobody else to paint but myself.”

The self portrait was part of a group of works from the same Belgian family being marketed by Sotheby’s under the heading “Figure and Form: Works from an Important Private Collection,” and being sold in various venues and categories. Another example, Bacon’s stunning “Three Studies for Self-Portrait” from 1980 (lot 10), with each 14-by-12 inch canvas set against a surprisingly cheery pale turquoise background , followed immediately after.

Much like its single-panel compatriot, the triptych, had not been seen in public and had been virtually unknown since it was acquired from Marlborough—in 1980—until this sale’s viewing.

(Marlborough was Bacon’s primary market dealer until his death in 1992.)

Everything seemed to be going swimmingly.

Then the Bacon cover lot, the magisterial “Study for a Pope I” from 1961 (lot 14)—inspired by and based on the Diego Velasquez masterpiece “Portrait of Pope Innocent X” from circa 1661—upturned that impression and bought in at a chandelier bid £23.5 million (est. £25-35 million).

The painting—which features the scarlet robed and capped figure seated and gripping the armrests of a green accented throne, looking out with a stony, savage gaze—had last sold at auction at Christie’s New York in November 2005 for $10 million. It was offered then by Gunter Sachs, the German industrialist, playboy and onetime husband of Brigitte Bardot, who committed suicide in 2011 at age 78.

Sachs had acquired the painting from the Marlborough-Gerson Gallery (as it was then called) in New York in 1966, and had displayed it in his Paris apartment for almost forty years.

It is one of six monumental pope studies Bacon created between April and May 1961, shortly before his groundbreaking retrospective in 1962 at the Tate Gallery.

One of the series (Study for a Pope II) is in the Vatican Museum in Vatican City.

The painting was last exhibited at the Fondation Beyeler in Basel in 2004.

Despite its history, the market wasn’t convinced.

“I was very glad the other Bacons sold well,” said dealer Gilbert Lloyd of Marlborough Gallery as he exited the salesroom, “but the Pope had an accident. It happens sometimes in an auction.”

A third Richter, “Stadtbild M 6” from 1968 (lot 20), an overhead cityscape view that was backed by a Sotheby’s guarantee, brought in at £1.8 million and became the property of the auction house (est. £2-4 million).

With so much talk of money and of global, 24-7 art transactions, it’s not surprising to see Sotheby’s come up with an art marketing gimmick like “To the Bearer On Demand: An Important Private European Collection,” dedicated to “Andy Warhol: The Art of the Dollar.”

Sotheby’s went to great lengths to make an impression, building a movie-set like bank vault in one of its New Bond Street gallery rooms to house the collection.

The seller is understood to be the Swiss property developer and Polo enthusiast Urs Schwarzenbach, who grabbed UK-wide headlines when he acquired an entire English village in Buckinghamshire in 2007.

Gerard Faggionato of David Zwirner Gallery was the underbidder.

Even with the huge price fetched for the hand-painted Warhol, the collection made just £34.3 million, trailing pre-sale expectations of £39.37-56.78 million.

Two major lots from the group inexplicably flopped, “Front and Back Dollar Bills” and “Two Dollar Bills (Back) (40 Two Dollar Bills in Green),” both from 1962 and carrying respective estimates of £12-18 million and £5-7 million.

The up and down gyrations of the evening proved somewhat difficult to explain.

“The auction houses keep pushing the estimates higher so much every time,” said Paris/Salzburg dealer Thaddaeus Ropac. “We don’t realize how strong the market is.”