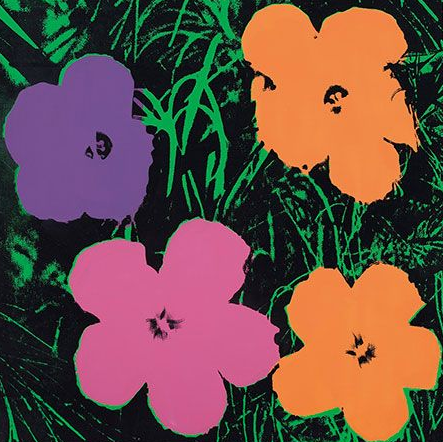 Spurred on by a number of high-performing entries, but held back by a softening Warhol market, Christie’s Post-War and Contemporary Art evening sale on Tuesday tallied $331,809,000 for the 53 lots that sold, just surpassing the low end of pre-sale expectations, around $320 million. (The usual high-low range wasn’t available since Christie’s offered a number of lots with unpublished estimates.)

Thirteen of the 66 lots offered failed to sell, for a decent buy-in rate by lot of 20 percent. Nine works sold for over $10 million and 43 sold for over a million dollars. Seven artist records were set.

The result lagged far behind last November’s record setting $852.8 million evening sale, which hit the highest mark ever for a single-session auction.

Typical of an era when auctions are looking more and more like financial transactions on Wall Street, this sale had its share of pre-arranged financial guarantees, with Christie’s investing in ten lots that carried a combined low estimate of $132.4. million.

Six of those ten guaranteed works sold for a combined result of $120.4 million, including the buyer’s premium. That would indicate a loss for the house, though it now owns those spurned works and can reoffer them either privately or at some future auction date.

Even so, the evening got off to a buoyant start, with a stellar group of works from longtime New York collectors Arthur and Anita Kahn, led by Alexander Calder’s “Vertical out of Horizontal” hanging mobile from 1948, executed in painted sheet metal and wire, which sold to a telephone bidder through Xin Lee, Christie’s deputy chairman, Asia, for an estimate-busting $9,573,000 (est. $2-3 million).

And the group included one AbEx-era painting, Richard Pousette-Dart’s shimmering diptych “Blood Wedding” from 1958, which sold to Barbara Nino of Rochester’s International Art Acquisitions, Inc. for a record $2,629,000 (est. $600-800,000). The couple had acquired it at Sotheby’s New York in November 1986 for $47,300, far less than the buyer’s premium tonight’s new owner will pay.

Large-scale sculpture, suitable only for the great outdoors, was also very much in evidence, for example Louise Bourgeois’s distinctly creepy bronze “Spider” from a 1997 cast, standing eleven feet tall and positioned directly in front of Christie’s 49th Street entrance. It sold on a single telephone bid for a record-shattering $28,165,000 (unpublished estimate in the $25-35 million range), coming to market with a Christie’s guarantee.

It ranks as the most expensive sculpture by a woman artist sold at auction, and its price was almost triple the previous record, set at Christie’s New York in November 2011 when “Spiders,” another bronze from 1996, made $10.7 million.

In contrast, at least in terms of scale, Giovanni Anselmo’s petite Arte Povera-era floor sculpture “Untitled” from 1969, fabricated in galvanized metal and brick and offered from the diminishing trove of legendary art dealer Ileana Sonnabend and the estate of Nina Castelli Sundell (the art dealer’s daughter), brought $509,000 (Est. $400-600,000).

The sculpture selection beyond Sonnabend included Bruce Naumann’s conceptual piece “Untitled (Hand Group)” from 1997, consisting of 14 disembodied and divergently gesturing hands, lightly touching one another, in cast phosphorous bronze, which sold to another telephone bidder for $4,197,000 (est. $2.5-3.5 million).

Paintings on offer included Roy Lichtenstein’s billboard-scaled “Interior with Yves Klein Sculpture” from 1991, which sold to the telephone for $6,661,000 (est $7-10 million).

That work, a blue sponge relief, was diagonally across the airy, art-filled room from a Sugimoto photo of Henry VIII from Madame Tussaud’s Museum. New York dealer Christophe van de Weghe was one of the underbidders on that.

“I tried for two things,” the dealer said later. “This market is very strong and there’s nothing else to say.”

Even so, the half-dozen works on offer by market icon Andy Warhol had bumpy results.

Warhol’s turquoise eye shadowed portrait, “Four Marilyns” from 1962, capturing a movie still image of the screen goddess, sold to a telephone bidder for the evening’s top lot price of $36,005,000 (unpublished estimate in the region of $40 million).

The 28 ¾ by 22 ¾ inch painting, with a glowing, cadmium orange background, was completed shortly after Monroe’s death in August 1962 from a barbiturate overdose at the age of 36. It had last sold at Phillips New York in May 2013 for $38.2 million. Christie’s evidently believed that price was too low, and guaranteed the seller an undisclosed amount in excess of what it made tonight for the chance to reoffer it.

“It was a casualty, and Christie’s lost a lot of money,” opined van de Weghe.

“It didn’t perform as well as we anticipated,” said Brett Gorvy, Christie’s chairman and international head of Post-War and Contemporary Art during, the post-sale press conference.

Another Warhol, the 48-inch-square “Late Four-Foot Flowers” from 1967, in acrylic, silkscreen inks and graphite on canvas, failed to sell at a chandelier-bid (as in imaginary) $5.5 million (est. $8-12 million).

It was part of a choice grouping of works from collectors Miles and Shirley Fiterman, who acquired the painting for $20,000 from the Leo Castelli Gallery in 1975, according to the Castelli Gallery archive.

Another Fiterman Warhol, “Self Portrait (Nine Times)” from 1967, a serial view of the artist in different hues, painted and silkscreened in nine identical 8 by 8 inch attached canvases, also tanked, at $6.5 million (est. $8-10 million).

Lucian Freud was represented by a large-scale seated portrait, more Old Master in appearance than contemporary. “The Brigadier” from 2003-04 sold to a telephone bidder for $34,885,000 (unpublished estimate in the region of $30 million). It was backed by a third party guarantee. London dealer Pilar Ordovas appeared to be the underbidder.

The painting, depicting the heavily medaled sitter Andrew Francis Bowles —probably best known as the former husband of Camilla, Duchess of Cornwall, who is now married to Prince Charles — was exhibited in “Lucian Freud Portraits” at the National Portrait Gallery London in 2012 and that traveled to the Modern Art Museum of Fort Worth. It was guaranteed, along with other offerings from the late collector and financier Damon Mezzacappa.

Apart from Mezzacappa, a number of solid works covering America’s great Abstract Expressionist era were on offer, including Helen Frankenthaler’s widely exhibited “Las Mayas” from 1958 (painted in homage to the Goya masterpiece to which its title referred). The Frankenthaler sold for $2,405,000 (est. $2-3 million), while

There were very few works offered by younger, less proven artists who’ve recently made a big bang in the primary market, and subsequently on the evening auction circuit, ending what may be an abbreviated bubble for what one critic has described as zombie formalism.

The closest candidate would be Joe Bradley’s intense “Tres Hombres” from 2011, in oil, crayon, spray paint and fabric collage on canvas, which fetched a record $3,077,000 (est. $1.5-2 million). The artist recently left the Gavin Brown Enterprise in New York and is now represented by Larry Gagosian. His work was also backed by another Christie’s guarantee.

Another guaranteed lot survived its market acid test as Christopher Wool’s 1990 “Untitled,” an enamel on aluminum text painting, sold to New York private dealer Philippe Segalot for $16,965,000 (unpublished estimate in the region of $18 million). Collector Dimitri Mavrommatis was the underbidder.

“I bid on two things,” said Mavrommatis, lighting a cigarette outside Christie’s: “the Electric Chair and the Christopher Wool. When I don’t buy I feel richer, especially at these prices.”