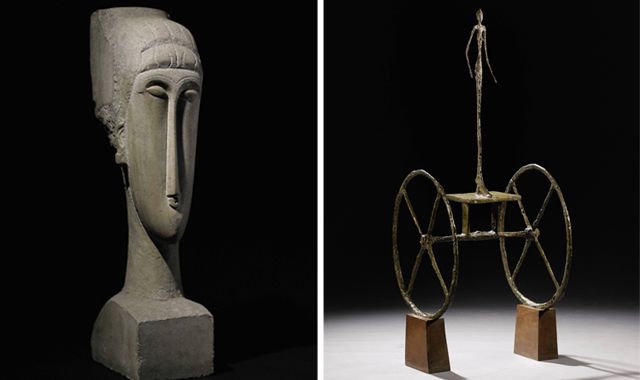 In a rare double-whammy of art market fortune, Sotheby’s will be offering two 20th-century masterworks of breathtaking sculpture at its November 4 evening sale of Impressionist and Modern art.

The earlier offering, Amedeo Modigliani’s iconic, 28 ¾ inch high carved stone “Tete” from 1911-12, first exhibited at the Salon d’Automne, 10e Exposition at the Grand Palais in Paris in 1912, carries an unpublished estimate in excess of $45 million. The sculpture was first acquired directly from the artist by the British sculptor Sir Augustus John in 1912 and has changed hands only twice since then, residing in UK and Belgian private collections. It has not been on public view since a 1955 Modigliani exhibition at the Kunsthalle in Bern, Switzerland.

Other carved versions of the 25 elongated female heads that were conceived and created by the artist as a decorative ensemble reside at the Metropolitan Museum of Art as well as the National Gallery of Art in Washington and the Tate Gallery in London.

This example is considered to be the finest one remaining in private hands. Modigliani sculptures at auction rarely appear.

Though known far more for his erotically charged female nudes and formal portraits of Bohemian friends and lovers, Modigliani’s carved heads retain an almost mystical allure, as if they were discovered in some archaeological dig. The sculptures were created at the artist’s open-air studio in Montparnasse and were done at night under the illumination of candlelight.

Another female deity is on offer in the painted bronze guise of Alberto Giacometti’s “Chariot” from 1950, a Post-War masterpiece at 57 inches high and depicting an ultra-slim standing woman astride an open platform set over huge chariot wheels and poised on carved wood blocks.

The illusion of speed is frozen in Giacometti’s extraordinary space, in part by the restraining blocks and the permanence of the bronze casting.

Giacometti told his New York dealer, Pierre Matisse, that the sculpture came about in a dreamy epiphany: “In 1947 I saw the sculpture before me as if already done and in 1950 it was impossible not to realize it, although it was already situated for me in the past.”

It is understood that six lifetime versions of the burnished gold cast exist, with only two left in private hands. This example is the sole painted version outside the museum world. The other regally resides at the Museum of Modern Art.

The anonymous seller acquired the Surrealist-inspired work in 1973 from the now shuttered though still storied Beyeler Gallery in Basel. It has never been on public exhibit, according to Sotheby’s.

“Chariot” also hides behind an unpublished estimate understood to be in the region of $100 million.

“Given the $104.3 million achieved at Sotheby’s by Giacometti’s ‘Homme qui marche I’ in 2010,” said Simon Shaw, co-head worldwide of Sotheby’s Impressionist & Modern Art department, “we believe that ‘Chariot’ could sell for in excess of $100 million.”

Shaw was referring to that February sale in London when London-based billionaire Lily Safra acquired the work, setting a record at the time for any work of art sold at auction. It is one of six works and the only sculpture that has sold for over $100 million at auction. It remains the highest price for any sculpture at auction.

These tremendous bookends of Modern and Post-War sculpture have never before appeared at auction, a rarity itself.