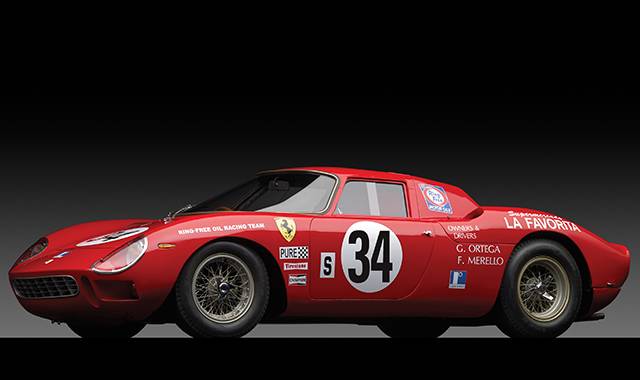 Canada-based collector car auction company RM has teamed up with Sotheby’s for a rare New York auction of high-end classic and concept cars, in the 34-lot-strong “Art of the Automobile” sale taking place this Thursday. The afternoon sale is expected to fetch in excess of $50 million, and 18 of the offerings have estimates in excess of $1 million.

Topping this exotic list of rolling sculpture is a race-proven, decal-sporting, red Ferrari 250 LM bodied with menacing coachwork by Scaglietti (1964), estimated at $12-15 million; one or both of the auction firms carry an ownership interest in the lot. The streamlined beauty drew many an open-mouthed stare while parked in the lobby of Sotheby’s York Avenue headquarters during the firm’s recent, two-week long onslaught of Impressionist & Modern and Contemporary art sales, which cumulatively brought $822 million.

Not far behind the low-slung Ferrari is a French Art Deco-styled Talbot-Lago T150-CSS Teardrop Cabriolet from 1938, featuring coachwork by Figoni et Falaschi and sporting the only known short-wheel base example (of only three examples ever made) with original chassis, engine and body. It is pegged at $8-10 million.

Unlike the yearly auctions of high-end classic cars by the likes of specialist car auction companies such as RM, Gooding & Company, and Russo & Steele, which take place in Northern California, Arizona and Florida, the Sotheby’s venue is the first car auction held in the city since RM’s September 2002 auction at the Waldorf Astoria, which made approximately $2 million.

In fact, Sotheby’s hasn’t staged a New York car auction since December 1994, when a beige and burgundy colored 1956 Rolls-Royce Silver Cloud, once owned by screen siren Bette Davis, sold for $500,000.

Other highlights include an Italian-bodied Aston Martin DB2/4 MKII “Supersonic” from 1956 (est. $1.8-2.4 million), which was originally owned by American Grand Prix race-car driver Harry Schell; and an off-the-American luxury chart Duesenberg Model SJ Beverly (1933), which is kitted out with an original factory super-charger at $2-2.5 million. Riding in the sumptuous backseat of the latter during a pre-sale drive along cobble-stoned streets in the West Village, the power of the 19-foot-long car made this chauffeured observer believe it could still reach a speed of 100 miles per hour.

More exotic, one-off fare is also heading to the auction block, including a pumpkin-orange Lincoln Indianapolis Exclusive Study car from 1955 (estimated at $2-2.5 million) which resembles more the styling of a ’50s-era fighter jet than a road-going vehicle. Of the handsome, classic sports cars that trade along the frequency of Picasso and Warhol works on the art auction floor, a high-horsepower mix also appears here, with a gun-metal-gray Mercedes-Benz 300 SL Gullwing (1955) at $1.3-1.5 million, and a Jaguar E-Type Series 1 4.2–Litre Roadster from 1966 (estimated at $225,000-325,000).

The sale begins at 2 p.m. on Thursday.