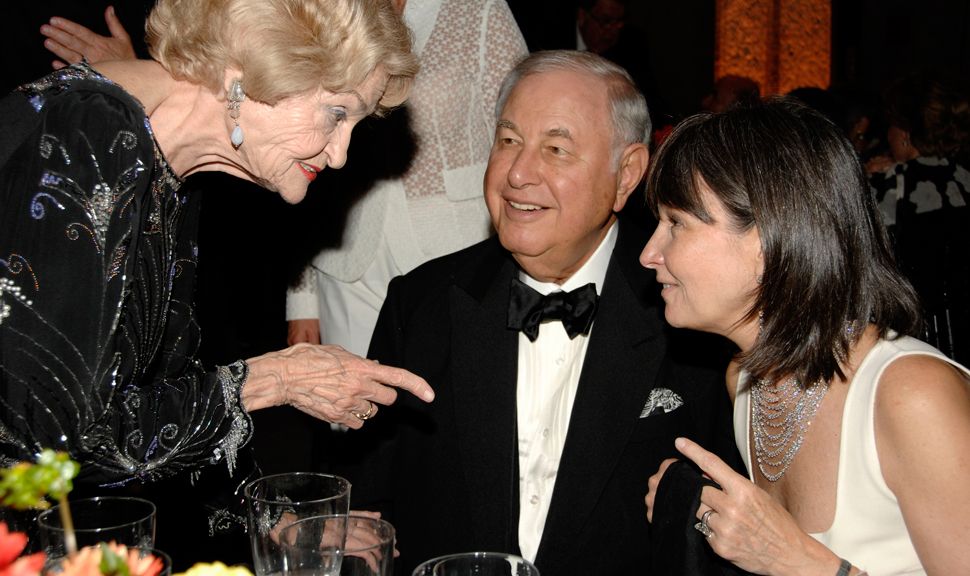 Self-made billionaire A. Alfred Taubman, the creator and constructor of the modern shopping mall as well as a chunk of the global auction business — later vilified as a price-fixing executive who wound up with a year and a day jail sentence — died on Friday of an apparent heart attack at his home in Bloomfield Hills, Michigan at the age of 91.

A college dropout who had to leave school to support his family, Taubman built a fortune developing tony shopping malls across America and made enough by 1983 to buy the then-failing and privately held Sotheby’s for just under $125 million. At the time, Taubman was considered a white knight for saving the Georgian era auction house from less patrician hands, having beaten out fellow American businessmen Marshall Cogan and Steven Swid, thanks in part to high-profile backers, including art collecting friend Henry Ford II. That deal was the subject of Jeffrey Hogrefe’s “Wholly Unacceptable: The Bitter Battle for Sotheby’s,” published by Morrow in 1986.

In a reverse of what Francois Pinault did sixteen years later after acquiring Christie’s, Taubman took Sotheby’s public, getting it listed on the New York Stock Exchange under the trading moniker BID, making it the oldest company trading on that high-wattage platform. In less than five years, Taubman transformed the company, serving as a backstage chairman and leaving day-to-day operations to his handpicked protégé Diana D. Brooks, who eventually became president and CEO. Employing a clever mix of Midwestern-bred marketing, financial guarantees to jittery sellers, an in-house financial services company for both collectors and dealers, and an astute understanding of how to sell expensive art at auction, Taubman made it so that, by 1989, Sotheby’s outgunned arch-rival Christie’s with auction sales of $2.9 billion to Christie’s $2.1 billion.

That honeymoon, however, soon lost its gloss as the global art market tanked in November, 1990 and both houses faced declining sales and ever-increasing expenses. By 1993, according to the indictment that ultimately landed Taubman in prison at age 77, the duopoly of Sotheby’s and Christie’s was engaged in a price-fixing scheme, colluding on the commissions charged to sellers and maintaining exclusive lists of special clients that each house secretly promised not to poach. For more on this elaborate scheme, it was artfully reported in Christopher Mason’s “The Art of the Steal: Inside the Sotheby’s-Christie’s Auction House Scandal,” published by Putnam in 2004.

Taubman’s trial was awash in high-living details: diary entries for his at-home massages, haircuts, manicures, and other tidbits of the superrich. He mesmerized a flock of trial-covering journalists, including the late and always dapper Dominic Dunne. Covering that trial — which this writer faithfully attended and reported on in downtown Manhattan, where the air still stung from the aftermath of the terrorist attack that brought down the Twin Towers — was a surreal experience.

Brooks escaped hard time by testifying against Taubman, pointing the finger at her boss for staging the scheme with fellow chairman Sir Anthony Tennant of Christie’s, who was also indicted but stayed outside the American legal system in England. (To this day, England still doesn’t have an extradition treaty for the apparently low-level crime of price-fixing.) Similarly, Christopher Davidge, Christie’s bespoke-suited former chief executive, sang like a canary, implicating his boss and escaping any fine or guilty plea in exchange for his testimony.

In fact, it was Davidge who first approached the U.S. Department of Justice, admitting to the price-fixing scandal in the fall of 2000, making himself eligible for the Anti-Trust division’s “Corporate Leniency Program” in exchange for his voluntary admission. Davidge may have saved Christie’s skin, since the headlines focused on Sotheby’s and Taubman, but it didn’t help Francois Pinault, who bought the company for $1.1 billion in 1999 without knowledge of the collusion already in progress. Pinault ultimately had to pay out of pocket an additional $256 million, Christie’s share of the class action settlement for all of the aggrieved sellers who were damaged by the price-fixing scheme, litigated by giant-killer David Boies.

Sotheby’s was in grave danger of going under as a result of the scandal and their bruising $256 million from the class action suit. Though Taubman had already relinquished his chairman role, he still remained Sotheby’s largest shareholder — and an invincible one, since he controlled the two-tiered stock ownership setup that ruled out any hostile takeover. He personally kicked in $156 million of that whopping settlement, even after his $45 million corporate criminal fine imposed by the U.S. Department of Justice, and an additional $30 million to settle a separate shareholder suit.

After his release from prison in 2003, a slimmer and more thoughtful Taubman, who learned how to cook instant oatmeal during this stretch and advised inmates on improving their lot, soldiered on with his various philanthropic activities, including his longtime support of the Detroit Institute of Arts. By 2005 he sold off the rest of his controlling stake in Sotheby’s and penned a nicely ghost-written memoir in 2007, “Threshold Resistance: The Extraordinary Career of a Luxury Retailing Pioneer.” (I tried to interview Taubman during his time at the Federal Medical Center in Rochester Minnesota and afterwards, but he only agreed to a brief and negligible telephone chat as his book was coming out.)

Notoriously hard of hearing, either by ailment or design, Taubman was always larger than life in person, the kind of big American who thought quickly on his feet — someone who could gauge the amount of square footage allotment for a shopping mall by standing on bare ground.

Sotheby’s sold $6.1 billion worth of art last year and Taubman historically played a major role in getting his old company to that point. At the time of his death, the Pontiac, MI bred businessman was still a billionaire.