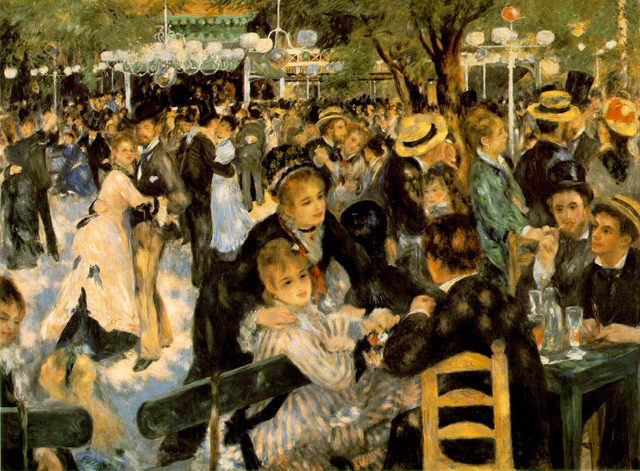 Renoir’s “At the Moulin de la Galette”, which sold for $78 million.

Pierre Auguste Renoir’s flirtatious tour de force, “At the Moulin de la Galette,” sold for a rollicking $78.1 million at Sotheby’s tonight to a so-far-unidentified telephone bidder, making it the second most expensive painting ever sold at auction. Just two days ago, Vincent van Gogh’s “Portrait of Dr. Gachet” sold at Christie’s for an unbeaten $82.5 million.

Crushing short-lived indications that the art market was softening, the impressionists sale tonight also set an auction record for a single evening sale, racking up $286.65 million and nudging past Christie’s stellar performance of $269.4 million two nights before.

In tonight’s gold-plated sale, a total of 51 lots sold for more than $1 million, with nine artists setting individual records. Out of the 70 works offered, 12 did not find buyers. Of those that sold, 12 went for more than the high estimate and 17 for less than the low estimate. The Japanese dominated the sale, acquiring 23 works of art; American buyers purchased 19 and European buyers 16.

The Guggenheim Museum offered three of the night’s top paintings, the sale of which was guaranteed by Sotheby’s. The awesome color-drenched abstraction “Fugue” by Wassily Kandinsky sold to Swiss super-dealer Ernst Beyeler for a smashing and record $20.9 million, the second highest lot of the evening and a hefty sum above the artist’s previous record of $4.62 million.

A second deaccessioned masterwork from the museum, Marc Chagall’s “Anniversary,” sold for a record $14.85 million to an unidentified Japanese dealer. Amedeo Modigliani’s “Boy in a Blue Jacket” from 1918 snared $11.55 million, selling to veteran Madison Avenue dealer Klaus Perls. The estimate on the Modigliani was $6 million to $8 million, indicating the exceptional interest in acquiring the striking portrait.

The Guggenheim is trying to raise money to help pay for a gigantic collection of some 200 primarily conceptual artworks and has taken considerable heat in the art community for liquidating these important works.

Edgar Degas’s crustily surfaced pastel of four ballerinas, “Preparation for the Class,” sold for $4.95 million to Tokyo dealer Kazuo Fujii. It was deaccessioned from the vast impressionist reserves of the Art Institute of Chicago.

Sotheby’s “guaranteed” that lot before the sale, assuring a minimum price for the pastel whether it sold or not.

Claude Monet’s blue-misted Venetian view, “Saint-Georges Majeur,” realized $6.6 million, shy of its $7 million to $9 million estimate. Another Monet from 1907, “Waterlilies,” consigned from the freshly liquidated collection of Lydia Winston Malbin, sold for $8.8 million. That picture carried a guarantee as well.

Registering well below the astronomical figure realized by “At the Moulin de la Galette,” another Renoir, “Young Girl and Cat,” sold for $18.15 million, again breaking the artist’s previous record of $17.68 million, set in April 1989 for “La Promenade.” It was the third highest price in the sale.

Auctioneer and Sotheby’s Chairman John L. Marion started the bidding for “Moulin,” which had been estimated to sell for between $40 million and $50 million, at $25 million and slowly and carefully raised the bids by $1 million increments, although no bidders in the room appeared to be raising their hands. After the price reached the $40 million range a duel began between two telephone bidders speaking to Sotheby’s personnel located at the front of the packed salesroom.

Unlike the breathless competition for “Dr. Gachet” Tuesday night, there was surprisingly little tension in the room since there was no one for the crowd to watch except the auctioneer. The process took 5 1/2 minutes to go from the opening bid to the “hammer” price at $71 million. “Are you all done?” Marion pointedly asked the silent underbidder through the Sotheby’s official on the telephone.

The 10 percent “buyer’s premium” boosted the price to $78.1 million. Before tonight, Renoir’s best-selling painting ranked 19th among top works of art; the new record price for this famous painting catapults him into the dizzying stratosphere of Picasso and van Gogh.

Part of the esteemed collection of Mr. and Mrs. John Hay Whitney, the canvas was originally purchased in 1929 by the 23-year-old collector for the then-staggering sum of $165,000. It was a record price for a Renoir as well as Whitney’s first art purchase.

John Hay Whitney was an ambassador to Great Britain as well as a publisher, racehorse breeder and consummate collector. His widow, Betsey Cushing Whitney, consigned the painting in January. She has not been available for comment on why she is selling the work or what she will do with the proceeds.

Excitement over the record price achieved for “Dr. Gachet” Tuesday continued unabated. A Japanese newspaper today identified the buyer of the van Gogh as Ryoei Saito, the 74-year-old honorary chairman of the Daishowa Paper Co. in Tokyo. Saito was quoted as saying he spent 5 billion yen ($33 million) more than he intended.

Saito told Nihon Keizei Shimbun (Japan’s equivalent of the Wall Street Journal) that he borrowed the money from banks using his property as security.

He said for safety he would keep “Dr. Gachet” close at hand for the time being but that eventually he would like to display it at the Shizuoka Prefectoral Art Museum. “I have been collecting paintings for over 40 years but I wanted to own this van Gogh,” he said. “Therefore I asked to make a successful bid no matter how expensive it was.”

Hideto Kobayashi, president of the Kobayashi Gallery of Tokyo, bid on Saito’s behalf. At his bid of $50 million it became a duel between Kobayashi and an unidentified European collector bidding by telephone. Unconfirmed word in the art world yesterday identified the mystery underbidder, who later in the same sale successfully bought the van Gogh “Self Portrait” for $26.4 million, as Greek shipping magnate and art collector Stavros Niarchos.

This entry was posted in Auctions and tagged Auguste Renoir, Christie’s, Claude Monet. Bookmark the permalink.