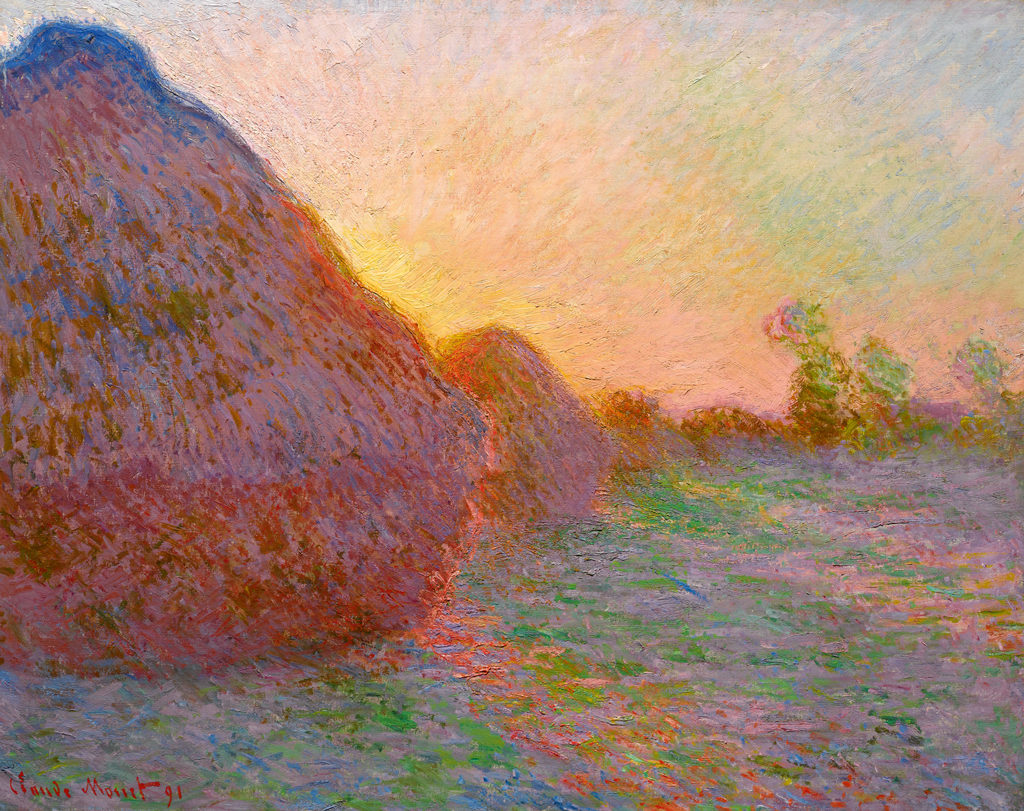 Powered by a stunning Claude Monet landscape that doubled its estimate and elicited hearty applause in the grand salesroom, Sotheby’s Impressionist and Modern evening sale in New York on Tuesday galloped to a market-affirming $349.9 million tally.

Only five of the 55 lots offered failed to sell, yielding a svelte buy-in rate by lot of 9.1 percent.

The buoyant result surged past pre-sale expectations of $252.6 million to $333.2 million. Those estimates do not include the buyer’s premium. (The hammer tally for the evening, before fees, was $300.5 million.)

The total also shot past last May’s $318.3 million result for the 32 lots that sold. The top lot at that sale was Amedeo Modigliani’s Nu couché (sur le côté gauche), 1917, which fetched $157.2 million, making it the most expensive work ever to sell at Sotheby’s.

Tuesday’s auction ranks as the highest-earning Impression-modern evening sale at Sotheby’s since one in May 2015 that took in $368 million.

Forty of the 50 works that sold tonight made over one million dollars. Of those lots, five exceeded $10 million, and three went over $20 million. Two artist records were set.

One such record-setting work was Claude Monet’s shimmering landscape Meules (Haystacks), 1890. The sales’s cover lot, Meules is dominated by an abstracted view of cone-shaped grain stacks beautifully illuminated by a setting sun. It fetched a record-breaking $110.7 million, selling to an unidentified blond-haired woman seated toward the rear of the salesroom. (The work bore an unpublished estimate in excess of $55 million.)

At least eight bidders chased the Impressionist prize in a drawn-out bidding duel that lasted eight minutes. It represents the highest price ever paid for an Impressionist work of art, and it ranks as the ninth-most expensive work of art to sell at auction. One of 25 works from an acclaimed and art-historically significant 1890–91 series, the Monet last sold at Christie’s New York back in May 1986 for $2.53 million. 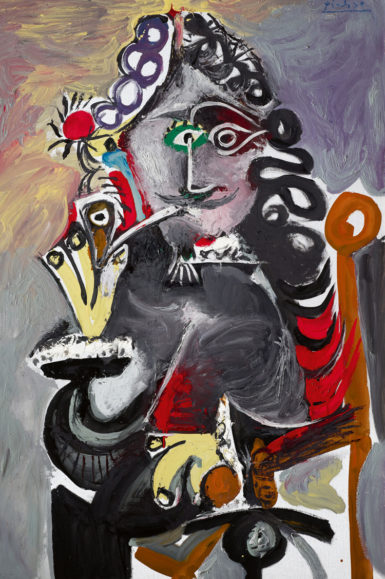 Art historian R. R. Brettell once wrote of the “Meules” series, “Never again in Monet’s career was a single object to play so crucial a role in adorning a world in flux.” The painting sold on Tuesday was first owned by storied Chicago collectors and philanthropists Potter and Berthe Palmer, who bought the picture in Paris at Durand-Ruel gallery in 1892.

Fourteen works were backed by so-called “irrevocable bids” from third parties outside Sotheby’s, assuring those paintings will sell and, with it, a finance fee for the risk-taking providers. Sotheby’s took on one house guarantee, a form of insurance for wary sellers.

A larger Léger, Le Campeur, 1er état (The Camper, First State) from 1954, this one replete with multiple figures and inspired by Édouard Manet’s masterpiece Le Déjeuner sur l’herbe, went to another telephone bidder for $8.24 million (on a $6 million–$8 million estimate). The Léger work last sold at Sotheby’s New York in May 2005 for $7.63 million.

Of the eight Pablo Picasso offerings, the first on the block, a somber large-scale Nazi Occupation–era interior with a rich exhibition history, Nature morte à la chaise et aux glaïeuls (Still Life with Chair and Gladioli), 1943, sold to international dealer David Nahmad for $4.58 million, well within its estimate of $4 million–$6 million. Given that the painting last sold at Sotheby’s New York in May 1981 for a $210,000 hammer, it was freshly available when it hit the block tonight.

The first tranche of irrevocable bid–backed works from an anonymous private collection—sold to benefit, in part, science and music nonprofits—hit a high note with Paul Signac’s dazzling harbor view Antibes, Soir (Antibes, Night), 1903. That work sold to the telephone for $7.67 million (on a $4 million–$6 million), while Pierre Bonnard’s appetizing interior view Nature morte à la levrette (Still Life with Greyhound), from ca. 1923, made $2.15 million, placing it within its $2 million–$3 million estimate.

If the Bonnard stands as proof, the market clearly desires well-traveled works with impeccable provenances. The canvas was last seen at the Metropolitan Museum of Art’s 2009 exhibition “Pierre Bonnard: The Late Still Lifes and Interiors.”

But the standout entry from this anonymous grouping—and, for that matter, the entire evening—was the Monet Meules painting. All told, the eight Impressionist-era pieces from the collection tallied $129.5 million. 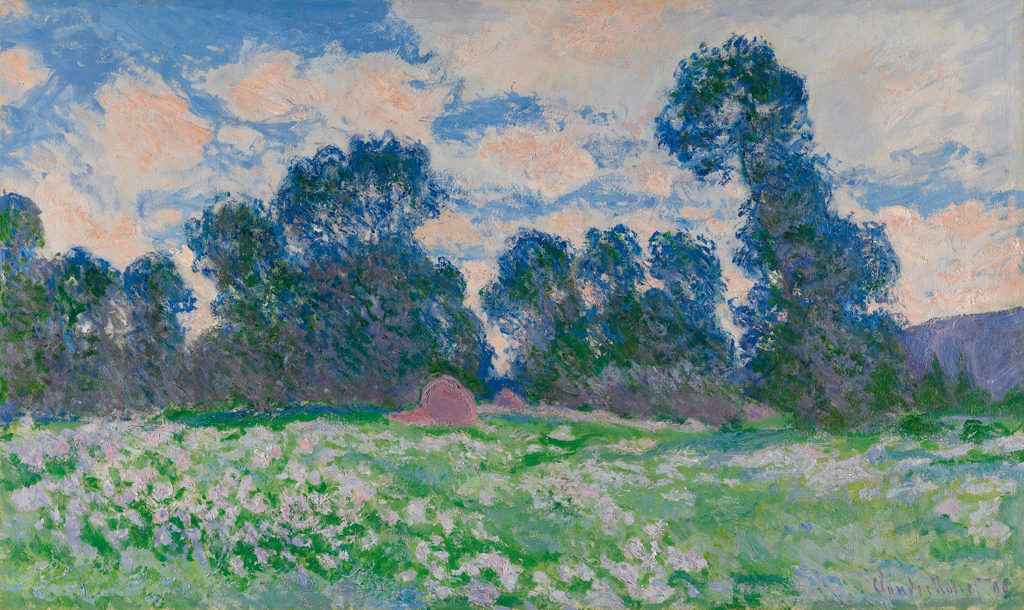 A second Monet, also from 1890 and (coincidentally) also once owned by the Potter Palmers, Prairie, ciel nuageux (Prairie, Cloudy), sold to a telephone bidder for $5.96 million (the estimate was $6 million–$8 million). The work features a panoramic plein-air view of the artist’s beloved Giverny countryside.

Yet another landscape painting by the Impressionist master, La Prairie fleurie from 1885, sold to the buyer of the record grain stack for $4.93 million.

A second Gauguin offering, Femme caraibe (Caribbean Woman) from 1889, featuring a dark-hued nude female figure set against a trio of giant sunflowers, was consigned from the storied Bakwin Collection, and most recently featured in the Art Institute of Chicago’s 2017–18 “Gauguin: Artist as Alchemist” exhibition. The work brought in $4.22 million on a $4 million–$6 million estimate.

Another Bakwin entry, Chaim Soutine’s La Femme en rouge (The Woman in Red) from 1923–24, showing a figure with a floppy, wide-brimmed blue hat, attracted a trio of bidders and sold for $11 million (on a $6 million–$8 million estimate) to Swiss art adviser Thomas Seydoux.

Back in Picasso country, the regal Femme au chien (Woman with Dog), 1962, sold via the telephone to Wynn Fine Art LLC for a whopping $54.9 million (est. $25-30 million). David Nahmad was the underbidder. The work presents the artist’s wife, Jacqueline Roque, seated in a high-backed armchair and petting Picasso’s Afghan hound Kaboul, who really is the star of this picture.

Neither of the high-value Picasso offerings came to market with financial guarantees, providing a clearer picture of their true worth.

The Impressionist and Modern sales category is increasingly pressed to find more material for a hungry market, so a number of artist interlopers who might not normally have appeared in an auction of this sort made appearances on Tuesday. Rufino Tamayo’s watermelon-themed still life Sandias (1980) fetched $4.93 million (est. $4 million–$6 million).

An even stranger addition to the sale was William Bouguereau’s truly gigantic 20-foot-long scene La Jeunesse de Bacchus (The Youth of Bacchus), 1884, which was bought in at $18 million (est. $25 million–$35 million), meaning that it failed to sell. The work, which features a grouping of nude figures dancing in a forest glen as hoofed satyrs play the flute, was originally predicted by some to be one of the evening’s top lots. It was first exhibited in 1884 in Paris at the “Salon des artistes français.”

Despite a poor performance at auction, the painting looked rather spectacular during pre-sale viewing at Sotheby’s newly reconfigured and redesigned ground-floor galleries.

“The depth of bidding wasn’t as deep as Christie’s on Monday evening,” said Guy Jennings, managing director of the London-based Fine Art Group, “but there’s still a lot of money in this market.”

The auction action continues on Wednesday evening with a Christie’s postwar and contemporary sale, with Jeff Koons’ iconic Rabbit sculpture from the S.I. Newhouse Collection threatening to bring in as much as $70 million.