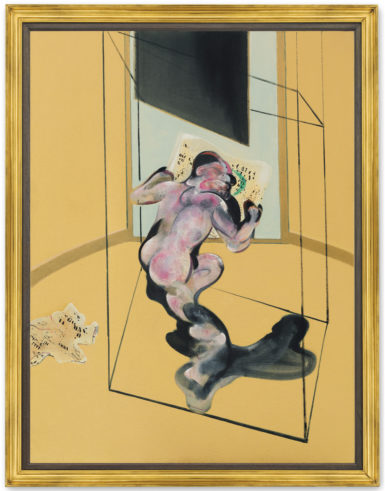 Francis Bacon’s Figure in Movement (1972) which sold for about $25.9 million in London. COURTESY CHRISTIE’S

Christie’s postwar and contemporary art evening sale got socked with a pricey trio of unsold lots, including a rare-to-market Gerhard Richter painting, Schädel (Skull), from 1983, that tanked at £11.5 million (about $15 million) against an unpublished estimate.

Better news was the sale’s top lot, Francis Bacon’s Figure in Movement (1972), portraying the nude form of the artist’s late lover and muse, George Dyer, on a roughly 6 1/2-by-5-foot canvas. It fetched £19.9 million ($25.9 million), including fees, reaching near the high end of its £15 million-to-£20 million estimate.

The winning telephone bidder outgunned New York and London dealer Per Skarstedt who was bidding in the King Street salesroom and is understood to have been the third-party guarantor of the Bacon, meaning he’s entitled to a financing fee for his trouble.

The work, which adorned the cover of the sale’s catalogue, had been in a private Swiss collection since May 1977, and now ranks as the 30th-most-expensive Bacon to sell at auction and the 18th most expensive among the single-panel works by the artist offered on the block.

The overall tally for the sale was £84.6 million ($109.5 million), with with a healthy buy-in rate by lot of 15 percent. The other major passes were a Jeff Koons and a Mark Grotjahn, which both had high estimates above $10 million.