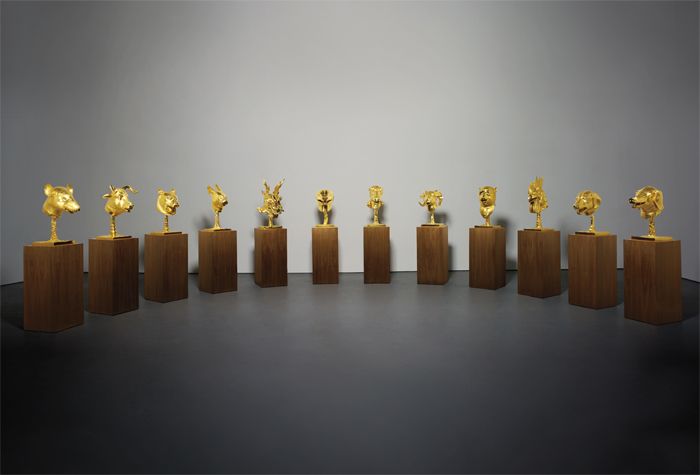 Fireworks were scarce at Phillips’s contemporary evening sale, coming at the tail end of a long week of auction action dominated by giants Christie’s and Sotheby’s. Still, the firm sold £17.7/$26.9 million, a fraction of what its fellow Mayfair rivals raked in (£117.1 at Christie’s and £123.5 million at Sotheby’s).

Only two of the 30 lots offered failed to sell for a trim buy-in rate by lot of seven percent.

Estimates do not reflect the buyer’s premium, calculated at 25 percent of the hammer price up to and including £50,000, 20 percent above £50,000 and up to £1 million and 12 percent of the portion for anything above that.

Phillips is best known, and sometimes controversially so, as launching young and barely tested artists on the secondary market platform, as evidenced by Fredrik Vaerslev’s large-scale abstraction “Untitled (Canopy Painting: Blue and Orange V)” from 2012, a Barnett Newman look-alike zip painting, which sold below estimate for £68,500/$104,120 (est. £80–120,000).

The evening’s most fantastical offering and cover lot, Ai Weiwei’s “Circle of Animals/Zodiac Heads” from 2010, cast in gold-plated bronze and number seven from an edition of eight plus four artist proofs, sold to a telephone bidder for a record £2,882,500/$4,381,400 (est. £2–3 million).

Inspired by the pillaged bronze zodiac figures from the water-clock fountain in the Garden of Perfect Brightness belonging to Emperor Qianlong of the Qing dynasty in 1860, the contemporary reprise consists of bust-like portraits of a rat, ox, tiger, rabbit, dragon, snake, horse, ram, monkey, rooster, dog, and boar. The group of zodiac heads is mounted on individual wooden plinths and larger versions have traveled the world and publicly displayed in outdoor settings from New York to London.

Ai Weiwei’s creation, apart from its artistic merit, is laced with geopolitical intrigue: At the Yves Saint Laurent and Pierre Bergé single owner sale in February 2009 co-presented by Christie’s and Pierre Bergé in Paris, two of the original 18th-century bronzes, a rabbit and a rat from the Old Summer Palace, were offered for sale and created an international uproar after the buyer turned out to be a Chinese protester indignant of the sale of such historical importance, who then refused to pay the $40 million price for the heads. François-Henri Pinault, the head of Kering, the company that owns Christie’s, made a highly publicized gift of the bronzes to China in 2013.

The only bidding fireworks that took place engulfed Mark Bradford’s intensely layered and mural-scaled composition “Biting the Book” from 2013, a mixed-media marvel at 102 3/8 by 144 ½ inches. It sold to a telephone bidder for a record £2,546,500/$3,870,680 (est. £1–1.5 million). After auctioneer Alexander Gilkes opened the bidding at £750,000, expecting an increment of say £50,000, a telephone bid roared in £1.3 million, setting off a contest between several other telephones before the winning £2.2 million hammer price. The multi-layered, map-like painting, comprised of all sorts of found paper detritus, was included in the Mark Bradford solo exhibition at London’s White Cube from 2013.

The heavy bidding for Bradford, however, dissipated during the rest of the sale, as if the global art market had already spent its wad at auction giants Sotheby’s and Christie’s earlier in the week.

It remains to be seen whether Phillips can further raise its game and take advantage of the boutique firm’s sensational London quarters facing Berkeley Square.

“I was all set for it to be a debacle,” said London dealer Inigo Philbrick, “but it felt like a successful sale and seemed like a lot of the prices were strong.”