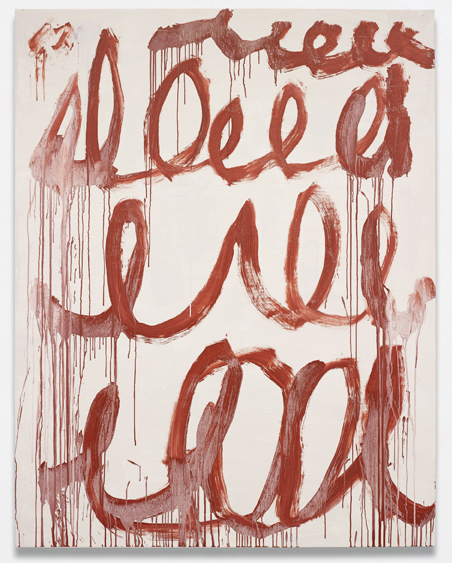 All of the 36 lots offered sold and the tally fell comfortably midway between the £24.1-36.1 million pre-sale estimate. Perhaps most impressively, the result doubled last October’s tepid £14.8/$23.6 million sale at Phillips’ inaugural contemporary art auction at its posh Berkeley Square headquarters. Three artist records were set and eight works sold for over a million pounds and 10 made over a million dollars.

“We were worried about the market going into the sale,” said Edward Dolman, CEO and chairman of Phillips, moments after the auction, “but there’s nothing to worry about.”

It seemed that way.

The boutique auction house was front-loaded with 18 fresh-to-market works from the late society dermatologist Dr. Frederic Brandt, known in the tabloids as “the prince of Botox,” who committed suicide in Miami last year. All of the Brandt works were backed by third party guarantees, meaning they were assured to sell, with a chunk of any upside going to those anonymous backers.

“Do you have a paddle?” asked auctioneer Hugues Joffre, Phillips’ freshly hired world-wide head of 20th-century art, who steered the sale with calm precision. When Nahmad shook his head “no,” the auctioneer smiled and said, “We know you very well.” London old master dealer Fabrizio Moretti, who is participating in the current Frieze Masters fair in collaboration with the contemporary dealership Hauser & Wirth, was the underbidder.

One of the evening’s over-achieving favorites, Yoshitomo Nara’s deceptively innocent “Missing in Action” figurative painting of a doll-like girl set against a blank background, another Brandt entry, sold to the telephone for a record £1,986,500/$3,019,480. The single owner section garnered £9.3/$14.2 million of the evening tally.

More impressively, art star Mark Bradford’s massive, mixed media composition “Constitution” from 2013, scaled at 132 by 120 inches, sold to New York/London dealer Daniella Luxembourg for a record £3,778,500/$5,743,320 (Est. £2-3 million). Hauser & Wirth was the underbidder, unwilling to go beyond the winning £3.3 hammer price, before the add-on freight of the buyer’s premium.

It was also hard to miss the pork pie hat visage of Los Angeles-based dealer/collector/marketeer Stefan Simchowitz, seated on an aisle and outgunning telephone bid competition for Tauba Auerbach’s crinkled and creased abstraction “Untitled (Fold)” from 2011, which realized £1,426,500/$2,168,280 (est £1.2-1.8 million). Simchowitz departed the packed salesroom immediately after his purchase.

Surprisingly, or so it seemed to this observer, there was barely any interest in Jonas Wood’s figurative painting of a freckle-faced basketball star, “D.J.” from 2009, which sold to a telephone bidder for £62,500/$95,000 (est. £50-70,0000). Woods is currently starring in a major, one-person show at Gagosian Gallery on Britannia Street, and larger and later works are coming up at both Sotheby’s and Christie’s.

“I’m very happy with the price,” said Beecham moments later. “I think in Europe they don’t have any idea about this guy, but I do.”

The evening action resumes on Thursday at Sotheby’s, and judging by Phillips’ sale this evening and the daylong action at Christie’s (in Association with de Pury) at its King Street salesroom with “A Visual Odyssey—Selections From LAC (Lambert Art Collection)” that delivered £14.9/$22.8 million (est. £10.8-16.8 million), the market appears to be in fine fettle.

Francois Pinault, Christie’s owner, looked happy standing at the back of the salesroom during the morning session after buying a Lambert memento, Damien Hirst’s “Pharmaceuticals,” an inkjet print in colors from a 2005 edition of 75 plus 10 artist’s proofs, for a hammer price of £9,500.

Pinault didn’t have a paddle either.