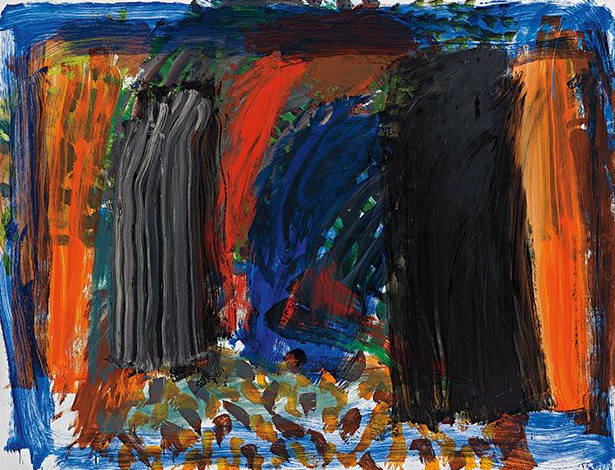 LONDON — Bucking strong financial headwinds from the global economy, Phillips managed to pull off a decent though hardly robust sale of 20th-Century & Contemporary Art that realized £24,590,000/$35,164,415.

Still, it easily exceeded last February’s £17.7/$26.8 million total, but that sale was strictly contemporary art without the higher-valued “20th Century” component, which Phillips inaugurated in November in New York.

One artist record was convincingly set.

Jim Hodges’s brass chain “Angels Voice” from 1993, closely resembling an elaborate spider web and offered with an installation template and certificate of authenticity from the artist, sold to Ed Tang of Sotheby’s recently acquired Art Agency Partners on behalf of a private client for £410,500/$587,015 (est. £300-500,000). It last sold at Phillips de Pury New York in November 2007 for a then buoyant $505,500.

Backed by a third party, the Manzoni last sold at Sotheby’s London in October 2000 for £465,500, some years before his market took off.

“I think I got a very good deal,” said Cardi as he exited the salesroom. “This is an early piece from the ’70s and has never been on the market. We were lucky to get it very cheap.”

Asked about his overall impression of the auction, Cardi said, “People are still interested in the safe material.”

Works by better known British painters Howard Hodgkin, Leon Kossoff, and Frank Auerbach bought in without a lick of interest.

In a sense, Phillips was gunning for collectors of all Modern and contemporary stripes, shedding its past reliance and specialty in promoting emerging artists.

Earlier still, Alexej Jawlensky’s uncharacteristically sweet “Junges Madchen Mit Zopf” from 1911, executed in oil on card laid down on board, sold to another telephone bidder for £2,210,500/$3,161,015 (est. £2-3 million). The Jawlensky was also backed by a third party guarantee.

“This is a different market,” said Edward Dolman, Phillips chairman and CEO, shortly after the auction, “but it is not a market in crisis. By all measures for us, it was a pretty respectable sale.”

Pressed to elaborate, Dolman added, “This is not a down market, I can tell you, having lived through a few of them. This one is just a bit more selective.”

The evening action continues on Wednesday at Sotheby’s.