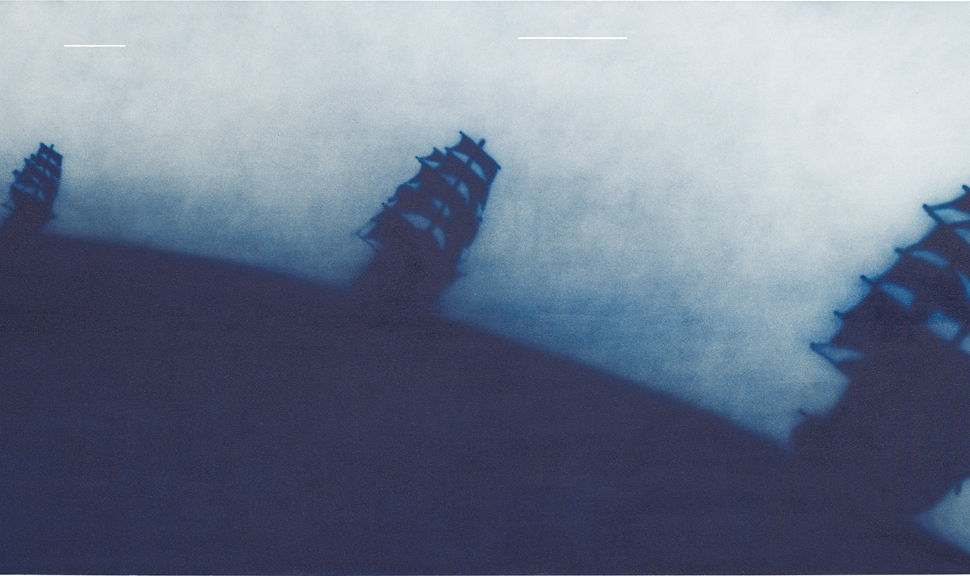 Four works sold for over a million pounds and seven hurdled one million dollars — including Ai WeiWei’s “Circle of Animals/Zodiac Heads” from 2010, the evening’s top lot at £3,442,500/$5,404,725 (est. £3-5 million), which set a new record for the artist. (All prices reported include the hammer price of each lot sold, plus the add-on buyer’s premium, calculated at 25 percent of the hammer price up to and including £50,000; 20 percent of the portion of the hammer price above £50,000 and up to and including £1 million; and 12 percent for anything above that. Pre-sale estimates do not include the buyer’s premium.)

Seventeen of the evening’s entries carried financial guarantees, six fully backed by Phillips and eleven by anonymous third party guarantees according to the symbols printed in the auction catalogue.

In his evening auction debut, Belgian born artist Harold Ancart’s “Untitled” from 2012, a strikingly graphic white-lined on black abstraction punctuated by a yellow orb and executed in oil stick on paper, housed in artist’s frame, doubled expectations and sold to Mugrabi for £47,500/$74,575 (est. £20-30,000).

Materials of all sorts formed part of the offerings mix, including exotic plumage as Carol Bove’s totem-like abstraction, “Untitled” from 2008, comprised of peacock feathers on linen, went for £140,500/$220,585 (est. £120-180,000). Speaking of exotic fare, Raqib Shaw’s large-scale, tondo-shaped composition of ancient ruins and wild animals, “Arrival of the Horse King from the series Paradise Lost” dated 2011–12, included a racy array of oil, acrylic, enamel, glitter, and rhinestones on birch plywood. It sold to another anonymous telephone bidder for the first million-dollar price for £722,500/$1,134,325 (est. £700,000-1 million).

Perfectly timed to coincide with his survey show that opened June 20th at the Hammer Museum in Los Angeles, Mark Bradford’s “Waiting on Forever” from 2011, densely layered and rich in found-media detritus, didn’t fly but sold on a single bid for £458,500/$719,845 (est. £400-600,000). It came unencumbered — that is, without a financial guarantee — which makes sense, given the enormous waiting list for any Bradford primary market works. Buyers have to purchase two works, promising one to a museum as a future donation.

“It was a small-scaled piece,” said Phillips’ London contemporary head Peter Sumner, in an after-sale comment, “but very difficult to get hold of in the current primary market.”

One-time “Sensation” star Damien Hirst was represented in part with a nearly 6-foot-square, butterfly-festooned “painting,” the kaleidoscopic patterned “Veneration” from 2007 and comprised of butterflies and household gloss paint on canvas that squeaked by at £482,500/$757,525 (est. £450-650,000).

For sheer bulk and boldly cast in bronze statement, Ai WeiWei’s “Circle of Animals/Zodiac Heads,” including a dozen creatures such as rat, tiger, and snake, took the evening’s top lot. Other sets from the edition have traveled the world in highly publicized outdoor exhibitions, such as the one at the Fountain Court at Somerset House in London in 2011.

“The market for works of that size,” said Ed Dolman, Phillips CEO, shortly after the hour-long auction, “is more limited.”

“For Ruscha,” said Vedovi as he exited the salesroom, “it was quite a good buy.”

“We’re very pleased with the sale,” said CEO Dolman moments after the steady yet unexceptional evening. “It made double what we did last year, so it’s a good progression.”