Skip to contentSkip to content
Artsy
Phillips Notches Its Best Sale Ever with Record-Breaking Bradford and £42 Million Picasso
March 8, 2018 by Judd Tully 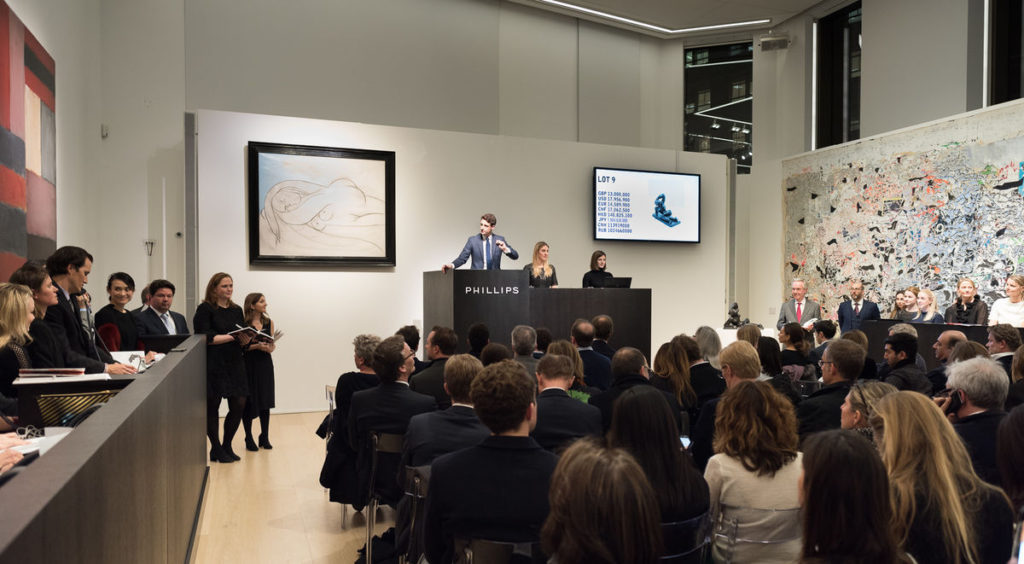 Only four of the 48 lots offered failed to sell, for a trim buy-in rate by lot of eight percent. The hammer tally of £84.5 million, before fees, blasted past the high presale estimate of £73.1 million. 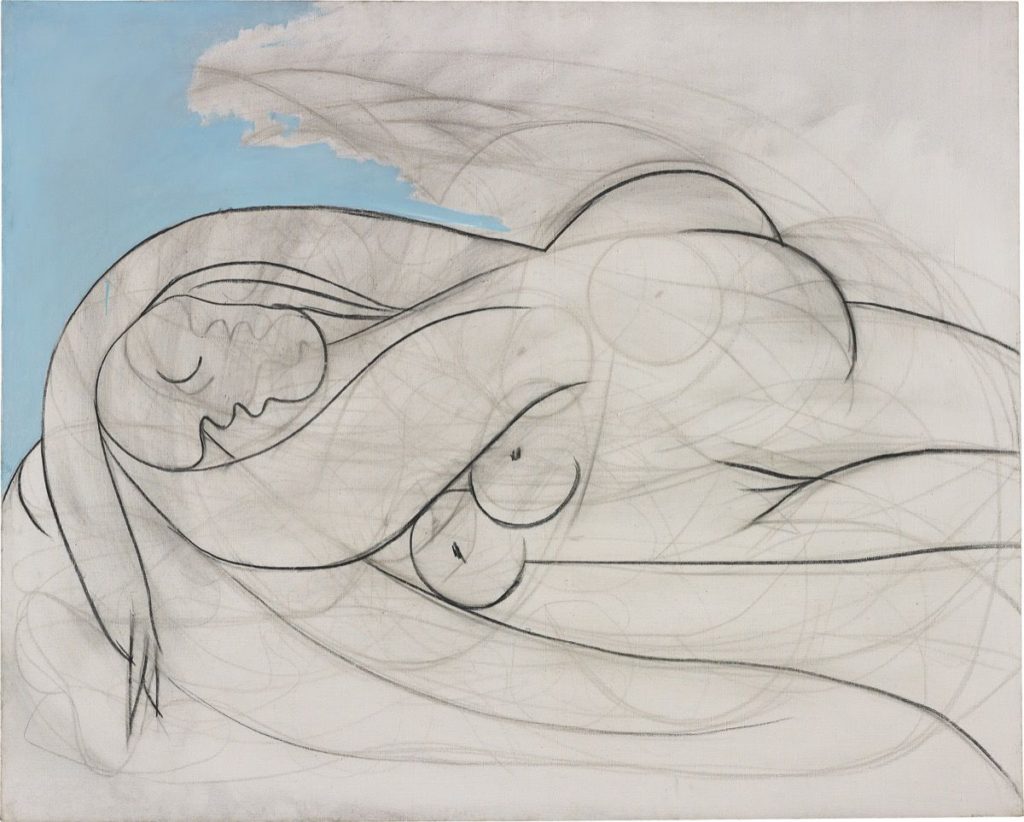 The record result dwarfed last March’s £14.6 million total for the 23 lots sold and clipped the previous $117-million high achieved by the house in its Carte Blanche curated sale in November 2010. Twelve of the 44 lots that sold Thursday night went for over one million pounds; and of those, four exceeded five million pounds. Fifteen of the lots that sold were backed by financial guarantees, 13 with help from third parties and two from Phillips itself.

The last evening sale of London’s spring auction week opened with Jack Whitten’s acrylic, coal, and gold leaf on canvas abstraction Bright Moments: For R.R. Kirk (1995), an homage to the jazz great Rahsaan Roland Kirk and part of the artist’s “Black Monoliths” series, which sold for £270,000 (£333,000 with fees) at an estimate of £200,000-300,000. It was the first time a work by the artist, who died in January at age 78, appeared in an evening London auction.

Lynette Yiadom-Boakye’s expressionist double-portrait of two standing female figures, Politics (2005), executed in oil on canvas, went for an estimate-topping £220,000 (£273,000 with fees). Formerly in the Saatchi Collection, the painting had last sold at Sotheby’s London in October 2013 for £52,500.

Though looking assuredly like an abstract painting, Wolfgang Tillmans’s Greifbar 27 (2014) is a chromogenic print mounted on aluminum and hailing from an edition of one—plus one artist’s proof—and sold for £380,000 (£465,000 with fees), above its high estimate of £300,000.

The artist used a light source on photographic paper to create the image as was first done with the cliché verre technique developed in the 19th century.

British Pop Art made an appearance with Allen Jones’s highly stylized composition of a pair of legs in vampy stiletto-heels, T-riffic (1966), which sold to Nick Acquavella of New York’s Acquavella Galleries for £580,000 (£705,000 with fees), well above its high estimate of £350,000. The title continues along the stretcher bar of the canvas: “I’LL TAKE THIS ONE PLEASE 1966” and came backed with a third party guarantee. The work was inspired by a visit to Los Angeles in 1965, during which Jones came across a racy Frederick’s of Hollywood mail order catalogue, according to an interview in the auction catalogue.

Figurative art surely dominated the evening entries as Lucian Freud’s nearly 16-by-22-inch Small Naked Portrait (2005) in oil-on-canvas sold, again to Acquavella and again for above its high estimate, for £650,000 (£789,000 with fees). Voluptuous as a Courbet nude, the model’s face is virtually blank, apart from the rich skin tones.

In a different and harsher light, Marlene Dumas’s haunting portrait The Pilgrim (2006) bears an astonishing and ghostly likeness to Osama Bin Laden. It sold to a telephone bidder for £1.45 million (£1.75 million with fees), just under its £1.5 million low estimate. 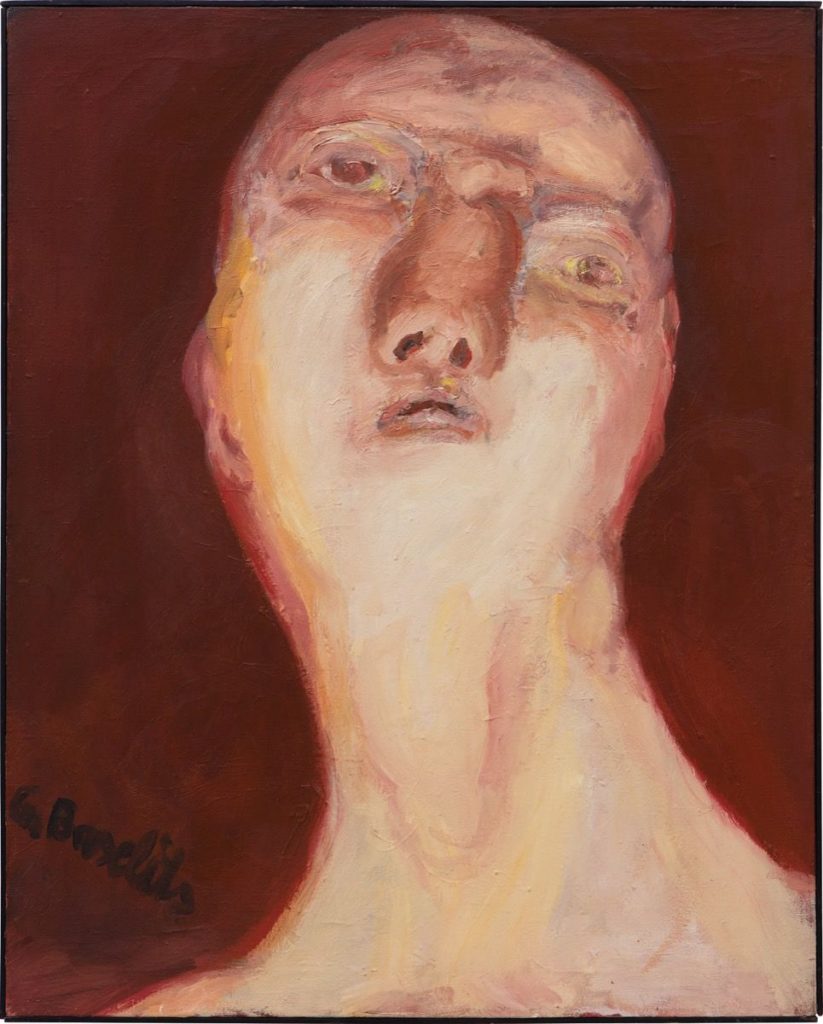 An early, Mannerist-styled oil-on-canvas painting from 1964 by Georg Baselitz, P.D. Idol, featuring the cropped visage of a long-necked human head and and set in an artist-made frame, sold for £1.6 million (£1.92 million with fees), just scraping past its low estimate of £1.5 million.

Still in that figurative mode, Luc Tuymans’s sardonic reprise of a 1952 Hollywood film poster, Singing in the Rain (1996), featuring three rain-coated figures hoisting large black umbrellas against a sky-blue background sold to a telephone bidder for £600,000 (£729,000 with fees) squarely within its estimate range.

Speaking of the cinema, Mark Bradford’s panoramic and richly layered composition, Helter Skelter I (2007) requires a wide-screen view to absorb the encyclopedic range of popular culture references in the silver-colored, mixed media collage on canvas colossus, which measures twelve feet tall and nearly 34 feet long. It sold to another telephone bidder for a record £7.5 million (£8.6 million with fees), towards the high end of its estimate range.

The network of meandering lines that consume every rippling inch of the canvas are replete with scraps of paper detritus that Bradford foraged from his Los Angeles neighborhood, making it a kind of urban archeological dig with a Kurt Schwitters twist. One can make out a large black skull half-buried in that landscape, an American flag emblem, and shards of words such as ‘King’ and ‘Candy’ in the undulating topography of the canvas. The longer you look, the more visual references become apparent.

Sold from the collection of tennis legend John McEnroe, the Bradford was backed by a third-party guarantee. It doubled the artist’s record set earlier this week at Christie’s when Bradford’s Bear Running from the Shotgun (2014) sold to Guggenheim Asher Associates for £3.8 million. It has been a remarkable recent run for Bradford. The artist’s Hong Kong exhibition inaugurates Hauser & Wirth’s new and jumbo space on March 26th, taking up both floors as well as the concurrent solo of new work at the gallery’s mega Los Angeles location—the first gallery exhibition in the artist’s hometown in over 15 years and which sold out in its opening days.

Despite its boutique status as a hip auction house specializing in contemporary art, jewelry, watches, photographs, and prints, Phillips has increasingly succeeded in luring modern works of art to market. This was made evident by the evening’s standout and rare cover lot: Picasso’s spare, yet convincingly sensual La Dormeuse, executed on March 13, 1932 in oil and charcoal on canvas and capturing the sleeping beauty of his muse and mistress Marie-Thérèse Walter. It sold to an anonymous telephone bidder on the line with Marianne Hoet, deputy chairman of Phillips Europe, for a whopping £37 million (£41.8 million with fees), more than doubling its high estimate.

Bidding opened at £9 million and quickly escalated with phone and room bids. Brett Gorvy of New York and London gallery Lévy Gorvy entered the fray at £22 million and wound up as the underbidder to Hoet’s telephone. It ranks as the ninth-most expensive Picasso to sell at auction.

Never before at auction and sheltered in a private European collection, the painting hails from the artist’s personal collection and was owned for a time by his widow, Jacqueline Rocque-Picasso and then her daughter Catherine Hutin-Blay. After that it went to market at Pace-Wildenstein Gallery in New York, a short-lived, hybrid entity that is no longer in operation. The family of the present owner acquired it there in June 1995. It would have been a perfect candidate for inclusion in the just-opened Tate Modern exhibition, “Picasso 1932—Love, Fame, Tragedy,” but apparently the owners thought otherwise.

Marie-Thérèse’s slumbering nude pose makes her appear as a siren-like giantess, almost floating across a pale blue sky, the charcoal outlines of her body sweeping across the roughly 51-by-63-inch canvas.

There seems to be a Picasso fever raging in London, especially after last week’s round of Impressionist and Modern Art auctions at Christie’s and Sotheby’s when 13 paintings by the artist fetched a cumulative £112.7 million. 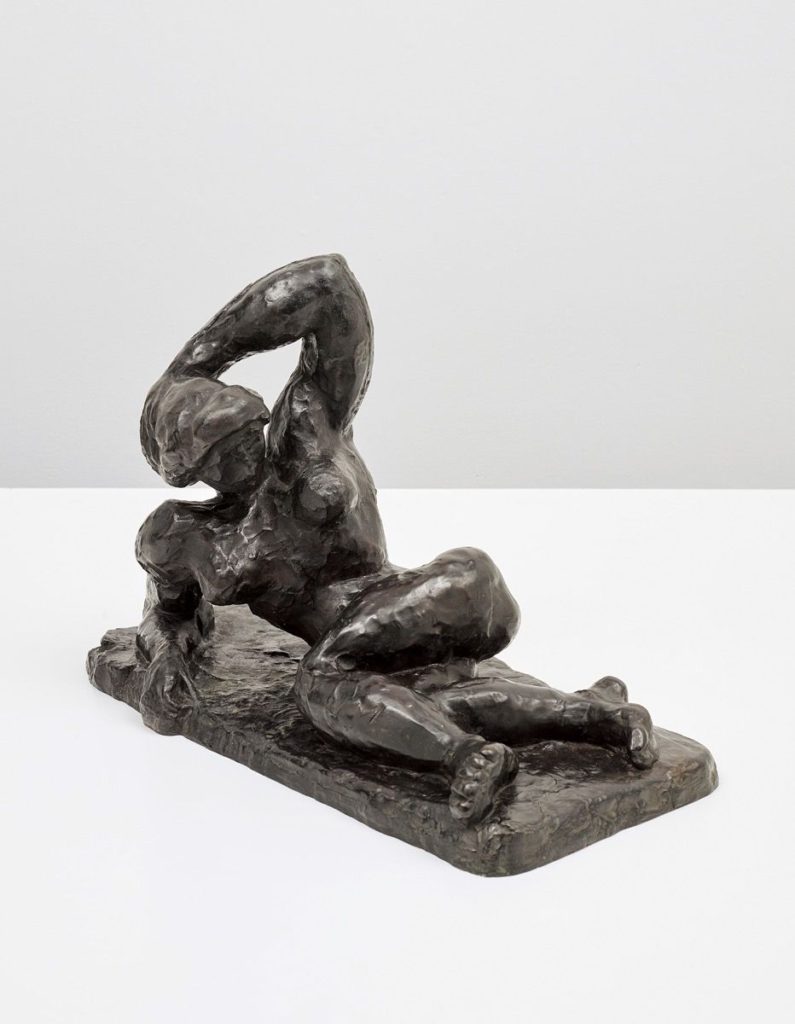 Alongside the Picasso nude, a stunning and equally rare Matisse bronze, Nu allongé I (Aurore), conceived by the artist in 1907 and cast in bronze circa 1908 from an edition of ten plus one artist proof, attracted at least four bidders and went to an anonymous telephone for an estimate-crushing £13 million (£14.8 million with fees). At the £9 million mark, the competition narrowed to two telephones and bids suddenly jumped in one million pound increments.

The exquisite, rather muscular figure had resided in the same French family since circa 1950. The artist consigned the bronze to his Paris gallery Bernheim-Jeune in January 1912. It now ranks as the second-most expensive Matisse sculpture to sell at auction.

Remarkably, neither the Picasso nor the Matisse came to market with guarantees or what is sometimes called entering “naked” in the art trade, fitting for two depictions of nudes.

Other modern entries included Jean Dubuffet’s early and heavily incised canvas featuring the grinning profile of a male figure, Profil Genre Aztèque (1945), that sold at its low estimate of £1.2 million (£1.4 million with fees) and Max Ernst’s distorted and hybrid composition of a bird-like figure, Le Surréalisme et la peinture in pastel-on-paper and dated 1942, which sold to a telephone bidder also at its low estimate of £350,000 (£429,000 with fees).

Rounding out the Modern entries, Marino Marini’s iconic horseman, Piccolo Cavaliere (1949), in hand-chiseled bronze and standing 16 inches high went for a below-estimate £350,000 (£429,000 with fees). It was acquired by Los Angeles collectors Betty and Stanley Sheinbaum in 1958 and came to market backed by a third party guarantee. 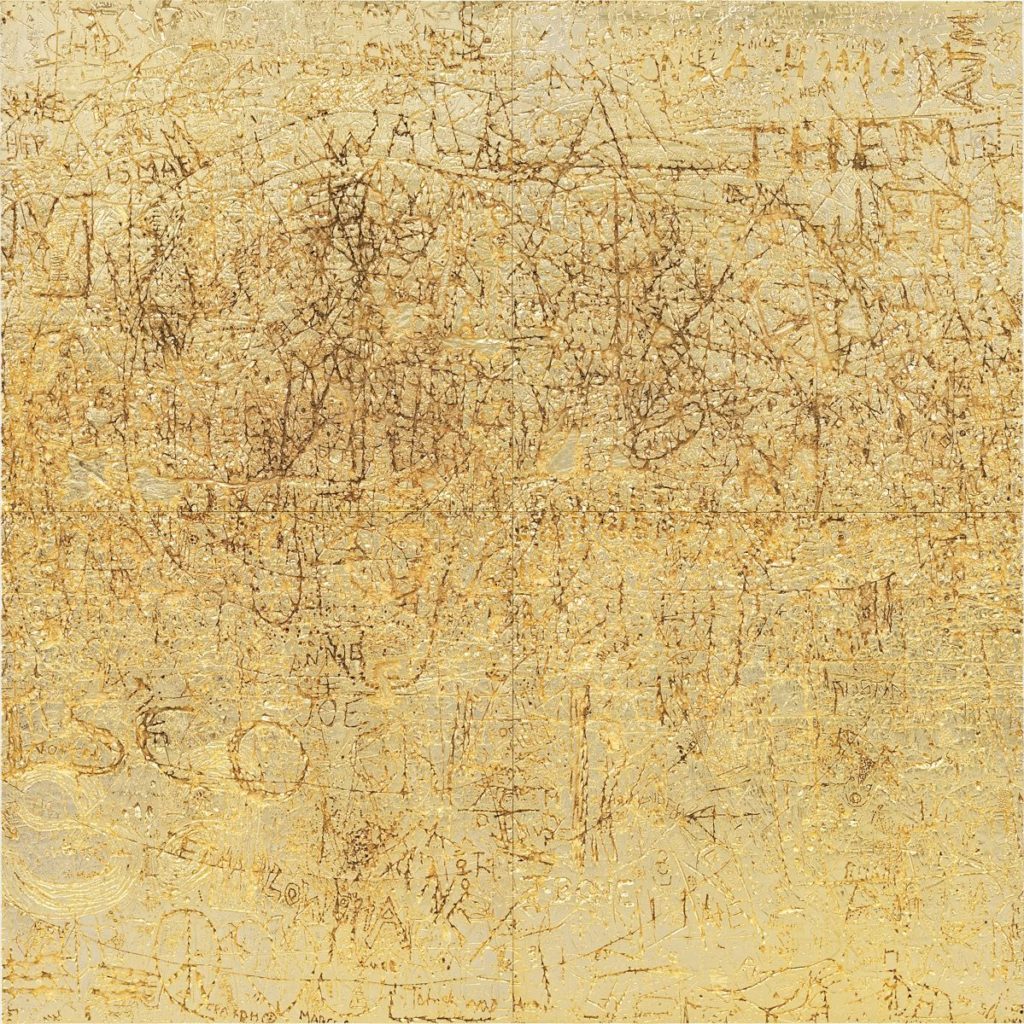 Back on the contemporary front, Anselm Kiefer’s darkly brooding and widely exhibited Die Meistersinger (1981-82), executed in oil, emulsion, sand, and collage elements on canvas, hammered down at its low estimate of £1.5 million (£1.8 million with fees). Fellow German artist Sigmar Polke’s alchemical composition in amber-colored artificial resin on polyester fabric, Untitled (1989), sold to another telephone bidder for its low estimate of £800,000 (£969,000 with fees). Rudolf Stingel’s four-panel, graffiti-incised composition, scaled at 94.5-by-94.5-inches in electroformed copper, plated nickel, and gold, Untitled (2012), sold to a telephone bidder for £4.9 million (£5.7 million with fees). All three came to market with third-party backing.

In the post-sale news conference, Hugues Joffre, the senior advisor to CEO Edward Dolman was asked about the identities of the anonymous Picasso and Matisse buyers.

“They’re both very sophisticated, educated and seasoned collectors,” said Joffre, who is credited with bringing in both works to Phillips.

Before he could utter another word, Dolman interjected to add the obvious: “And rich.”

The evening action takes a breather until the New York sales in May, about which Dolman is optimistic.

“It looks very good to me right now,” he said.