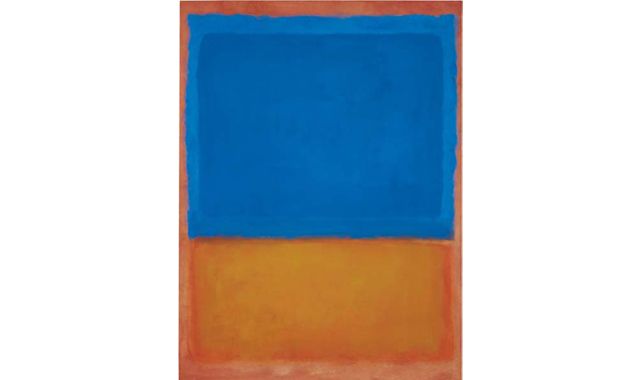 Phillips’ season-ending contemporary art evening sale on Thursday delivered $130,905,000, making it the Russian-owned auction house’s biggest sale to date. It easily trumped last May’s $78.6 million result for 30 lots sold — as compared to 37 on Thursday — and it even eclipsed the one-off “Carte Blanche” auction organized at the boutique house by Philippe Segalot in November 2010, which made $117 million.

Sixteen of the lots that sold hurdled the million-dollar mark, and of those, three vaulted past $10 million and one painting exceeded $50 million. Three artist records were set.

Eleven of the offerings this round carried pre-arranged third party guarantees, assuring the sale of those lots no matter how they performed.

The auction got off to a spirited start with auction newbie Alex Israel’s 96-inch-high, pink-hued abstraction “Untitled (Flat)” from 2013, comprised of acrylic on stucco, wood and aluminum frame and ceramic tiles, which fetched $581,000(est. $200-300,000). Los Angeles dealer Stavros Merjos was one of the posse of underbidders.

The work was made at the Warner Brothers Studio in Burbank , as attested to by a stamp on the back. Israel’s conceptual style and penchant for bespoke construction have captured the fancy of the market.

It was a big New York night for Smith, whose exhibition of new paintings, “Tigris,” was opening at the same time at the Skarstedt Gallery on East 79th Street.

Works by market workhorses Jean-Michel Basquiat and Andy Warhol were sprinkled throughout the sale, with Basquiat’s early and mostly text-free “Untitled” from 1981, in acrylic and oil stick on canvas, selling to a telephone bidder for a solid $11,365,000 (est. $8-12 million). The painting was included in the artist’s most recent traveling retrospective held at the Fondation Beyeler in 2010.

A later and even sparser Basquiat, “Rodo” from 1984, depicting a blue skinned super-hero posed in a bare room containing a single unoccupied chair, surged to $3,021,000 (est. $2-3 million). Connecticut collector David Rogath was the underbidder.

Then came a billboard scaled collaboration between Basquiat and Warhol, “Zenith” from 1985, titled after the electronics brand. It set a record for that artist duo of $11,365,000 (est. $10-15 million). The painting combines Basquiat’s primitive-style figures with Warhol’s advertising logos and large skull and cross bones.

While Phillips is best known for offering cutting-edge contemporary works, often for the first time at auction, the house appears to be expanding its mission by offering more blue chip works.

That was evident as the bold yet sublimely luminous Mark Rothko abstraction“Untitled (Red, Blue, Orange)” from 1955, bolstered in part by a separate 53 page catalogue devoted to the painting and the artist, went for the top-lot price of $56,165,000 (unpublished estimate). Bidding opened at $30 million and tentatively crawled along until an actual phone bidder came in to play.

“It’s a great price for a painting of that scale,” said Michael McGinnis, Phillips’s world-wide head of contemporary art, who was part of the small group of telephone underbidders.

On Thursday, not surprisingly, it came to market with a third party guarantee.

Another blue-chip name, Gerhard Richter, was represented by the evening’s cover lot, “Madchen Im sessel (Lila)” from 1965-66, infused with an all-over shade of violet and based on an out-of-focus photograph of a reclining woman. It sparked enthusiastic bidding and sold to an anonymous telephone bidder for $8,005,000 (est. $6-8 million).

Fellow German artist Sigmar Polke, currently the subject of a retrospective at the Museum of Modern Art, was represented by “Untitled” from 1994, a dispersion-and-pigment-on-canvas composition swirling with Benday dots, which sold to New York private dealer Leslie Rankow. “I bought it for a client and I’m very pleased,” said the dealer as she searched for her driver outside Phillips’s Park Avenue headquarters.

Jack Tilton was in the salesroom on Thursday, too, and characterized the evening this way: “The young stuff is going through the roof, some of the classics did OK, and some struggled. All this young abstraction stuff is going for $200,000 to half a million. It looks like a shift in the market. Let’s see if it lasts for more than fifteen minutes.”

The evening made for a pleasant though hardly super-charged end to the marathon auction week.

“It’s not something that will fit over the sofa, but it’s a beautiful thing to behold.”

Together, the four evening auctions, starting with Christie’s one-off “If I Live I’ll See You Tuesday” sale on Monday, brought a cumulative and unprecedented $1,373,858,000.