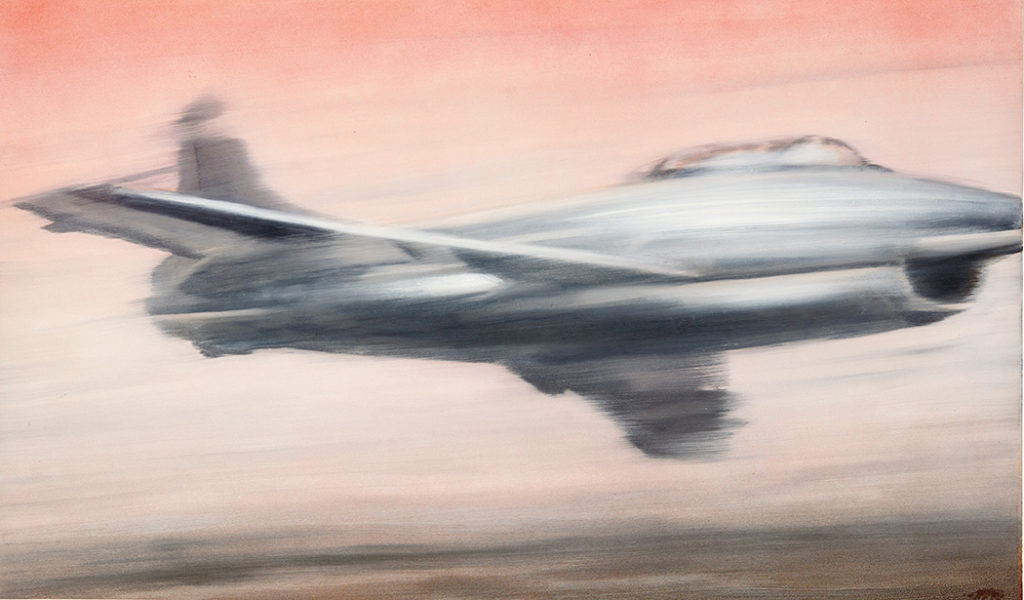 Phillips, the boutique-scaled auction house and distant competitor to the duopoly of Christie’s and Sotheby’s, delivered its highest tally for a 20th Century and Contemporary Art evening sale on Wednesday, realizing $111,239,500.

Only three of the 37 lots offered failed to sell, for a pristine 8 percent buy-in rate by lot.

The tally hurdled the low range of pre-sale expectations, which had been pegged at $100 to $144 million, the firm’s highest estimate for a sale since it was acquired by the Mercury Group in 2008.

Twenty-one of the 34 lots that sold went for over one million dollars and of those, three exceeded $10 million.

While two artist records were set, both by Latin American female artists, the room lacked any sense of drama or high-wattage bidding. It was a modestly orchestrated and efficient affair.

The evening started on a buoyant note with Carmen Herrera’s shaped painting “Cerulean,” a geometric abstraction from 1965 that sold to the telephone for a record $970,000 (est. $600-800,000). The work was backed by a house guarantee, though it didn’t look like it needed insurance given the trio of telephone bidders.

The 101-year-old Cuban born artist is currently enjoying a retrospective at the Whitney Museum of American Art.

Wade Guyton’s “Untitled” abstraction from 2009, printed out in Epson UltraChrome Inkjet on linen and dominated by the artist’s trademark “X” shape in pale blue, was also guaranteed by Phillips and sold to another telephone bidder for $1,990,000 (est. $1.2-1.5 million).

Of the few buy-ins, Michael Borremans’ less literal and more ambiguous composition, “Sweet Disposition,” an oil on canvas from 2003 presenting a cropped view of a woman, perhaps a seamstress, bent over and working at a table, expired at a chandelier bid of $400,000 (est. $500,000-700,000).

Vija Celmins’ extraordinarily detailed drawing of a wave-tossed ocean, “Untitled” from 1969, composed in graphite on acrylic ground on paper, sold to another telephone bidder for $2,890,000 (est. $1.5-2.5 million). The 12-by-17-inch drawing was backed by a third-party guarantee.

If the third-party backer is successful in winning a lot, he or she is entitled to a fixed fee, either a percentage of the hammer price or the buyer’s premium, or some combination thereof, for taking the risk, according to the small print explanation at the back of the auction catalogue.

Both Christie’s and Sotheby’s now use similar language in describing the compensation for third-party risk takers, a result of pressure from the New York City Department of Consumer Affairs that regulates the houses.

The bulk of major lots, nine in all, carried third-party backing (plus three fully backed by Phillips), as evidenced by the stunning cover and top lot, Gerhard Richter’s blurrily photo-realist and decidedly iconic “Düsenjäger (Bomber)” from 1963, which fetched $25,565,000 (est. $25-35 million).

Variously reported as being sold by Microsoft co-founder Paul Allen, the painting last sold at Christie’s New York in November 2007 in the single-owner sale of the Susan and Lewis Manilow Collection for a then-record $11,241,000.

It was featured in the Art Institute of Chicago leg of the traveling retrospective organized by the Museum of Modern Art, “Gerhard Richter: Forty Years of Painting” in 2002.

The painting of the fighter jet speeding across a pink-tinted sky is a key and early work, a celebrated example of the artist’s “Capitalist Realism” period, an East German equivalent of the Pop Art movement that Richter, Sigmar Polke and Konrad Lueg invented in the early ’60s. Richter painted eight of these bomber canvases between 1963 and 1964.

Despite the seemingly high altitude price, the painting didn’t spark a bidding war and went to the third-party guarantor.

Given the surfeit of Richter paintings on offer this auction season, it seems clear the artist is the current king of the secondary market.

Richter’s onetime close collaborator and friend, Sigmar Polke, was also part of the Phillips’ lot mix with “Untitled” from 2000, dominated by an appropriated image of a group of nymphs from antiquity and executed in acrylic and India Ink on paper. It sold for $1,150,000 (est. $1-1.5 million).

Abstract Expressionist works were also on offer, including Kazuo Shiraga’s explosive “T40” from 1962, a 45-by-35-inch composition thick with swirling paint moved by the human brush of the artist’s bare feet. It sold to a telephone manned by newbie deputy chairman and former Christie’s rainmaker Robert Manley for $1,450,000 (est. $1.2-1.8 million).

In similar fashion, Clyfford Still’s magisterial “Untitled” from circa 1948-49, ablaze in red, gold and black, sold to a telephone manned by senior director Scott Nussbaum, a recent hire from Sotheby’s for $13,690,000 (est. $12-18 million). It too carried third-party backing.

Other blue chip entries included David Hockney’s English countryside home portrait, “The Gate” from 2000, composed in oil on canvas and scaled at 60 by 76 inches, which brought $6,970,000 (est. $6-8 million). Again, it came armed with third-party backing.

Some works came to market “naked,” that is without backing, including Alexander Calder’s airborne mobile, “Two Horizontal and Nine Verticals” in painted sheet metal and wire from 1956, which hit $2,050,000 (est. $1.8-2.5 million), and Roy Lichtenstein’s repaired “Nudes in Mirror” from 1994, comprised of oil and Magna on canvas, which brought $21,530,000 (unpublished estimate in the region of $20 million).

Phillips published a stand-alone catalogue on the 100-by-84-inch painting, a work that famously survived a knife attack during an exhibition in Austria in 2005 and was subsequently repaired by a world-class art restorer.

It also represents the artist’s last major series before his untimely death in 1997. It debuted at the Leo Castelli Gallery “Nudes” exhibition by the artist in 1994.

The catalogue included an illustrated overview of famous vandalized works of art, an argument perhaps for celebrating the damaged canvas.

In any case, the full court press promotion worked.

Phillips, best known of late for poaching talent from Christie’s and Sotheby’s, is starting to bring higher value works of art to market, and Wednesday night’s roster proves that the company is gaining some traction in chipping some market share away from the auction giants.

Other sculpture highlights ranged wildly, at least in style, from Jeff Koons’ regal and baroque “Italian Woman” in stainless steel from 1986, which sold for $3,610,000 (est. $3-5 million), to Donald Judd’s Minimal and austerely sleek “Untitled (Menziken 88-16),” fabricated in six identically sized and spaced boxes of clear anodized aluminum with green over black and red acrylic sheet, which went for $2,410,000 (est. $2-3 million).

It last sold at Christie’s New York in November 2011 for $2,042,500 and this time around came to market without a reserve, meaning any bid would be taken.

“The big story for us,” said Edward Dolman, Phillips CEO in remarks shortly after the auction, “is the progression, and we’ve made a very significant step up for a market that has contracted. We’re on a roll.”

The auction action resumed moments later across town at Christie’s Impressionist and Modern Art sale, where a rare to market Claude Monet “Grainstack” from 1891 fetched a record $81,447,500.