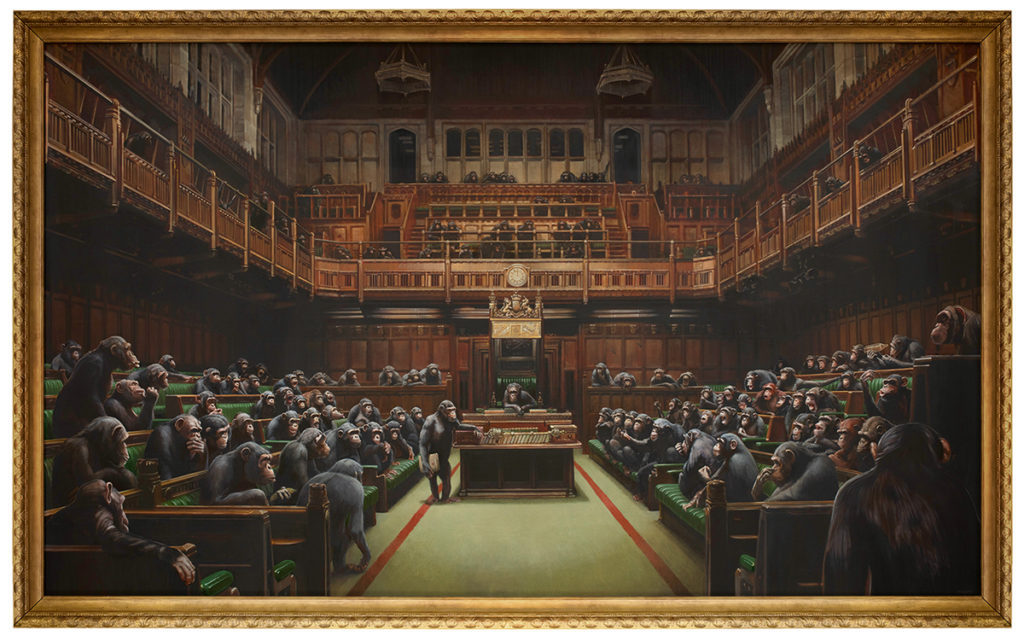 Two figures who began as obscure street artists before rocketing to fame, one from Brooklyn and one from Bristol, dominated Sotheby’s otherwise unremarkable contemporary art evening sale in London on Thursday night that tallied £54.7 million (about $67.3 million).

Fifteen works sold for over £1 million, and 16 made over $1 million. Three artist records were set, including for Banksy—the only truly big news of the night—whose painting of a chimpanzee-filled House of Commons generated a bidding frenzy.

Ten lots were backed by pre-sale guarantees, either by so-called irrevocable bids or in combination with house backing. 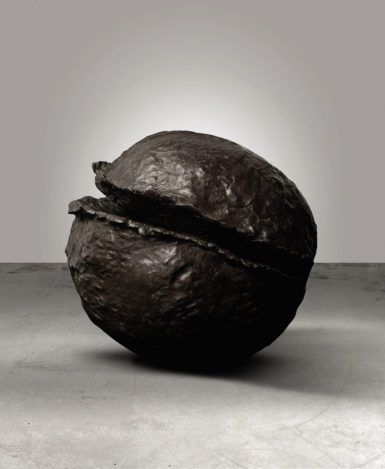 The evening got off to an auspicious start with Nicole Eisenman’s richly detailed bedroom scene, Close to the Edge (2015). It raced to a record £639,000 ($785,395), trouncing its £180,000 high estimate as it sold to Alex Acquavella of New York’s Acquavella Galleries. It was the artist’s first appearance in a Sotheby’s evening sale. London and New York dealer Per Skarstedt was the underbidder.

A fresh-to-market, boldly colored 2000 Albert Oehlen painting, part-abstract and part-figurative, Ingwertopf (Ginger Pot), sold to a telephone bidder for £915,000 ($1.12 million) on an estimate of £800,000 to £1.2 million. Measuring about 75 by 63 inches, it was backed by a third-party irrevocable bid and attracted a single bid from that anonymous backer.

Oehlen is also the subject of an exhibition at the Serpentine Galleries in London that opened earlier this week, as well as a solo at Galerie Max Hetzler’s outpost here—and he’s in a group show at Lévy Gorvy.

A second Oehlen, considerably larger at about 110 by 134 inches and dating from 2003, Geigenbau (Lutherie), realized £1.82 million ($2.23 million) against an estimate of £1.5 million to £2 million. Oehlen has described the style of the series that incorporates the work—in a cryptic, tongue-in cheek-way—as “post-non-representational painting.” It also came to market backed by an irrevocable bid.

The auction was neatly packed with a number of postwar Italian works, including Lucio Fontana’s iconic bronze sphere marked with a jagged cleft, Concetto spaziale, Natura (1959–60), which sold to another telephone bidder for £2.54 million ($3.12 million), just above its £2 million-to-£3 million estimate. It was backed by an irrevocable bid and last sold at Sotheby’s London in October 2004 for £655,200 ($1.18 million), making a nice return for its seller. 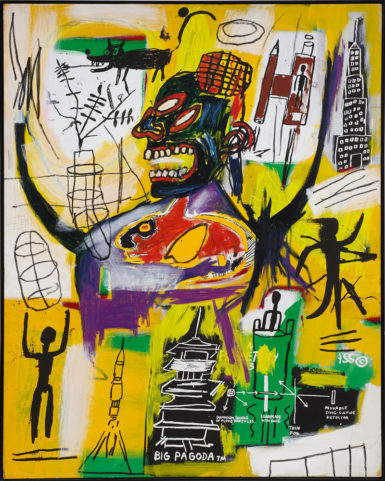 In that same Italian vein, Salvatore Scarpitta’s Housing Developed (1960), impressively executed in tightly wrapped bandages and mixed media on canvas, sold to another telephone bidder for a record £2.54 million ($3.12 million); its estimate was £1.5 million to £2 million. London and Milan dealer Marco Voena was the underbidder. It last sold at Sotheby’s London in October 2005 for £114,000 ($201,887), and this time it arrived on the block with a third-party guarantee.

Rounding out the Italian offerings, Alberto Burri’s fire-engine red and partially melted Rosso Plastica (1963), in plastic, acrylic, and combustion on canvas, sold to a telephone bidder for £2.06 million ($2.53 million) versus an estimate of £1.4 million to £1.8 million. Brussels dealer Mimo Vedovi was the underbidder.

Piero Manzoni’s beautifully pleated abstraction Achrome, a creased canvas and kaolin from circa 1959, was withdrawn from the sale at the 11th hour, and its £4 million-to-£6 million estimate was scratched from the ledger. (It last sold at Sotheby’s London in June 2007 for £453,000, or $824,727).

In the thin realm of bigger-ticket items, the cover lot Jean-Michel Basquiat painting, Pyro (1984), trophy scaled at 86 ¼ by 68 inches and exceptionally frenetic with the artist’s texts and images, sold to another anonymous telephone bidder for £9.88 million ($12.2 million); its unpublished estimate was in the region of £9 million. The centerpiece of the painting is a figure with bared teeth and upraised purple-shaded arms. It last sold at auction at Sotheby’s London in October 1996 for £221,500 ($352,594), proving Warren Buffet’s investment maxim of “buy and hold.”

A second Basquiat, Natives Carrying Things (1983), larger scaled at 7 feet square, is almost Minimal in appearance, with its two figures holding boxes that are labeled as “FOOD” and “SALT”; it brought £3.26 million ($4 million); its estimate was £2.5 million–£3 million.

Yes, those were the days.

Entries from the British Isles were relatively thin, though Irish-born Francis Bacon’s early and mysteriously disturbing Figure with Monkey (1951), featuring a dark-haired man reaching into a monkey’s cage sold to Wentworth Beaumont of the London art advisory firm Beaumont Nathan for £2.78 million ($3.41 million); it had been estimated at £1.8 million to £2.5 million. The picture was first exhibited at the Hanover Gallery in London during Bacon’s solo show there in 1951, and last sold at Sotheby’s London in February 2012 for £1.83 million ($2.88 million).

In a surprising development (or so it seemed, given his market might), David Hockney’s charming Bridlington Studio Interior (1996), of his Yorkshire Coast studio, was bought-in at a chandelier-bid £600,000—far below its £900,000 low estimate. 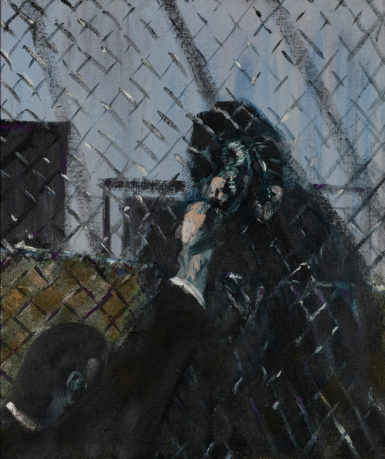 The evening would have been a respectful and low-key replay of most mid-season London sales apart from the appearance of one massive painting by the preeminent trickster Banksy, Devolved Parliament (2009), which is museum scaled at 108 5/8 by 175 ½ inches and features some 100 chimpanzees hard at work cavorting in the House of Commons. Executed in the style of a rather stuffy, 19th-century history painting, it perfectly echoes or critiques the current state of political affairs in Britain as the nation stumbles along into the unknown territory of a no-deal Brexit at the end of the month.

Sotheby’s went to extraordinary lengths marketing the picture, installing it in a separate room for the preview, complete with a metal detector entryway, security guards, and a pair of long benches fabricated to resemble those in the House of Commons.

Much has been said and reported on how much the painting has been altered since its birth in 2009. It was bought by tonight’s seller in 2011, and was displayed at the Bristol Museum and Art Gallery in 2009 and earlier this year.

“Banksy took it back from the owner,” said Oliver Barker, senior director and chairman of Sotheby’s Europe in a post-sale comment to several reporters, “and he made the chamber darker and changed the overhead lights. Artists have been doing that kind of thing for hundreds of years.”

Bearing a Pest Control certificate of authenticity (the official Banksy registry), the painting sparked riotous waves of bidding both in the salesroom and on the banks of telephones during a 13-minute battle, escalating the final price to a jaw-dropping and record-breaking £9.88 million ($12.2 million), on an estimate of £1.5 million to £2 million.

Yes, it made the identical price as the Basquiat, a feat almost too ridiculous to believe.

It easily swamped Banksy’s previous mark, set at Sotheby’s New York in February 2008, when the one-year-old Keep It Spotless made $1.87 million.

It also rocketed past Love Is in the Bin, formerly known as Girl with Balloon (2006), which sold here last October for £1.04 million ($1.37 million). That work was infamously booby-trapped with a compact shredder installed on the backside of the painting that partially shredded the work, thanks to a remote-control gizmo triggered in the salesroom by a Banksy accomplice.

Though tonight’s Banksy sold to a telephone bidder that Sotheby’s declined to identify in any way, the determined-though-unsuccessful underbidder was in the salesroom, a mobile phone glued to his ear, and he waved his paddle like mad to gain auctioneer Oliver Barker’s attention.

The 30-something bidder, neatly dressed in a white shirt and red pocket square in his sport jacket, departed the room, and though he declined to give his name, told this reporter in excellent English, “I’m an art collector from Prague, and I’m definitely a Banksy admirer.”

Asked who was on the other end of his call, the bidder said, “He’s my partner and I prefer to remain anonymous.”

After the sale, workmen could be observed dismantling the metal detector that screened visitors during the preview. Still and all, the Banksy phenomenon provided some needed fireworks for an otherwise ho-hum evening.

Don’t be surprised if the painting appears in public again on October 31, Britain’s deadline for Brexit.