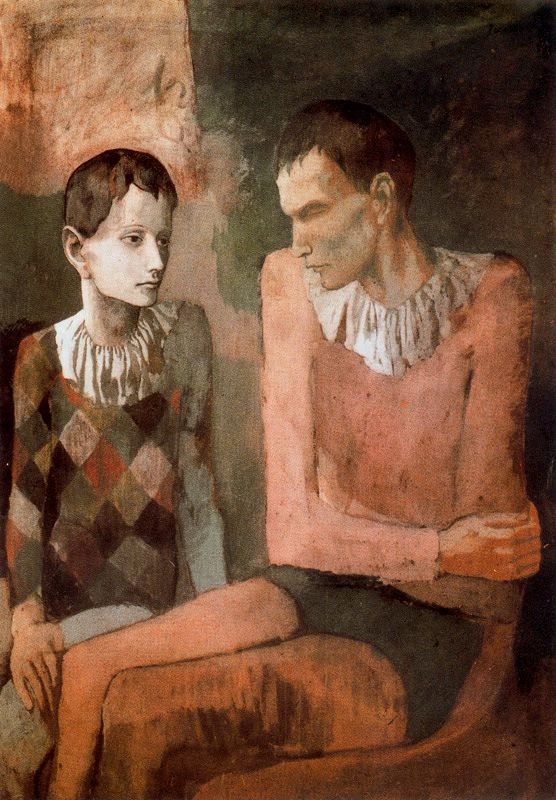 Pablo Picasso’s haunting double portrait in watercolor, “Acrobat and Young Harlequin,” sold at Christie’s London showroom last night for a remarkable $38,456,000, a record for a 20th-century artwork and the third highest price ever for a picture at auction.

The “anonymous Japanese buyer” — not identified any further by Christie’s — was in the salesroom, battling four other bidders in the room plus three on telephones. Bidding began at 5 million pounds and escalated in 500,000-pound bursts.

According to Wrey, Christie’s personnel, including the auctioneer and chairman of Christie, Manson and Woods Ltd. in London, Charles Allsopp, celebrated with rose-colored champagne after the evening sale that totaled $102,009,600, the highest ever for a European auction. The color of the champagne refers to the “Rose Period” when Picasso painted his most famous circus images and lived the life of an impoverished bohemian artist.

At that point, the auction house’s estimate for the London harlequin’s price was upped from 10 million to 13 million pounds, roughly $18.4 million to $23.9 million.

The new price also sets a record for a gouache (watercolor) in any category and demonstrates both the strength of the auction market and the rarity of a major Rose Period painting coming to sale.

It was at Christie’s London showroom in March 1987 that Vincent van Gogh’s “Sunflowers” sold for a then unheard-of $39.9 million. That picture dropped to second place in November 1987 when van Gogh’s incomparable “Irises” sold at Sotheby’s in New York for $53.9 million, still the highest price ever fetched for a work of art anywhere. The identity of the “Irises” owner has never been revealed officially, but “Sunflowers” went to a Japanese insurance firm, Yasuda Fire & Marine Insurance Co.

Arms folded, the bony man resembles figures in other Picasso portraits from that same explosive period, including the famous “The Frugal Meal.” An abstract background of pale blue tones surrounds the eerily lit seated figures.

The picture has a remarkable history: It was one of almost 16,000 works of art seized from more than 100 German museums and classified and exhibited as “degenerate art” by the Nazis in 1937. The Nazis removed it from its place in the museum of Wuppertal-Elberfeld in Germany, where it had hung since 1911. At the infamous “Entartete Kunst” auction held in Lucerne in 1939, when the Nazi government liquidated a huge cache of so-called decadent art, the picture brought the second highest price when it sold for 80,000 Swiss francs to a Belgian collector. It has been in private hands ever since.

Picasso frequented the Montmartre nightspot Cirque Medrano on Place Pigalle with his friends and newfound mistress Fernande Olivier in 1904-05. The mini-circus-nightclub was close to the artist’s top-floor studio at 13 Rue Ravignon, rechristened the “Bateau-Lavoir” (“Laundry Barge”) by poet Max Jacob. Picasso often painted at night in the studio, holding a candle in his left hand for illumination, according to accounts at the time.

“Acrobat and Young Harlequin” was first exhibited in Paris in February 1905, one of eight works on the circus theme. Writing in a letter dated Feb. 22 of that year, Picasso told his friend Jacinto Reventos, “I keep working and in a few days time I’ll be having a small exhibition — please God people like it and I sell everything in it … We’ll see what comes out of it.” Apparently, the picture did not immediately sell but was reviewed enthusiastically by the famous French writer and poet Guillaume Apollinaire.