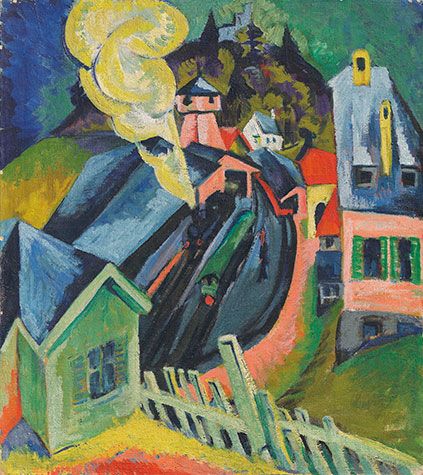 As 2016 dawns, the auction specialists’ usual hyperbole predicting record prices for their hard-won wares is strikingly absent. The combination of unrelenting art market action and tumultuous world events has coalesced into a less confident market, populated by experts that are acutely aware of its long-running success.

Jay Vincze, the Christie’s London head of Impressionist and modern art, links the tentative atmosphere to the glut of quality material lured to the block by ever-climbing prices. “There’s so much choice around these days that buyers can afford to be selective and wait for some-thing that really ticks the boxes for people,” Vincze observes. “If something is not quite right, they’ll wait for another moment and let other pieces slide.”

Despite the cautious atmosphere, the art market soldiers on, collectors ready to pick and choose whatever is best and brightest.

Unlike its New York relation, Christie’s London is still staging its evening sale the same week as that of archrival Sotheby’s.

Just on the cusp of the artist’s move to abstraction, a transitional period Wassily Kandinsky, Strasse in Murnau, 1908, depicts a bustling street scene and carries an estimate of £1.5 million to £2.5 million ($2.2–3.7 million).

The house is also offering Fernand Léger’s Cubist-style Le Moteur, 1918 (est. £4–6 million; $6–9 million), brimming with strong color, crisp geometry, and the symbolic power of the postwar Machine Age. In November 2001 a larger version with the same title and from the same year sold for $16.7 million, then an artist record, at Christie’s New York as part of the René Gaffé single-owner sale.

Another highlight from the World War I era, Ernst Ludwig Kirchner’s Expressionist Bahnhof Königstein, 1916, is pegged at £1.5 million to £2 million ($2.2–3 million). The valuation reflects the fresh-to-market status of the work, which has been in the same German collection since it was acquired directly from the artist the year it was painted.

An iconic 1928 Marc Chagall, Les mariés de la Tour Eiffel, depicting the artist and his wife, Bella, flying across Paris, the Eiffel Tower prominent in the back-ground, is estimated at £4.8 million to £6.8 million ($7–10 million).

February 2 / Christie’s / The Art of the Surreal

In the house’s separate-catalogue Surrealist sale, held the same evening as the Impressionist and modern art auction, the scale and period fast-forwards significantly to Joan Miró’s exuberantly giddy and color-charged Femme et oiseaux dans la nuit, 1968, measuring nearly four feet wide. Reflecting this season’s moderated expectations, the painting carries an estimate of £3 million to £5 million ($4.5–7.5 million), despite having earned £5.2 million ($7.8 million) on an estimate of £4 million to £6 million ($5.9–8.9 million) in its last appearance on the block, in June 2010, at the same house.

In somber contrast, thanks to its unusual gray, black, and white palette, Pablo Picasso’s small-scaled yet power-packed Arlequin, 1926, is estimated at £1.5 million to £2.5 million ($2.2–3.7 million).

Top-shelf works by Henri Matisse of almost any stripe are increasingly rare to market, so the entry of La leçon de piano, 1923, is a welcome highlight. The painting captures the remarkable, densely patterned and outfitted interior of the artist’s apartment and studio, the intimate setting animated by Henriette Darricarrère, the artist’s favorite model of the period, who is seated and playing at the upright piano, accompanied by her two brothers in striped shirts. Painted not long after the artist’s move to Nice, the canvas is rarer still for its Scottish provenance, having belonged to noted collector Royan Middleton. “It is in perfect condition,” says James Mackie, London deputy head of Impressionist and modern art at Sotheby’s, “and has been in the same collection since 1927.” It carries an estimate of £12 million to £18 million ($18–27 million).

The house is also championing a large-scale Franz Marc land-
scape from 1909, Grosse Landschaft I (Large Landscape I), depicting a verdant pasture dominated by a group of four magnificent stallions. Estimated at £4 million to £6 million ($5.9–8.9 million), the work predates Wassily Kandinsky’s 1911 Blaue Reiter treatise yet captures the spirit and boldly chromatic palette of the movement that would take that name. Writing later of Marc, who died during World War I, Kandinsky observed that the artist “had a direct, intimate relationship with nature like a mountaineer or even an animal.”

February 3 / Sotheby’s / The Art of the Surreal

The evening features a separate-catalogue Surrealist component, led in part by Magritte’s page-size gouache-on-paper Shéhérazade, from 1956, featuring the penetrating eyes and lipsticked mouth of a disembodied “pearl woman” hovering in a pink sky. It was acquired directly by Chicago collector Barnet Hodes as a commissioned work. Last sold at Sotheby’s London in June 2006 for £400,000 ($740,000), it is currently estimated at £500,000 to £700,000 ($745,000–1 million). “We’ve seen a real depth in the market for the later gouaches,” says Mackie. “There’s a refinement of what Magritte’s about.”

Sotheby’s is also offering sculptures by Salvador Dalí and Man Ray, making for a fascinating case study on the subject of the Greco-Roman goddess Aphrodite/Venus as a Surrealist object.

Man Ray’s kissing cousin, Vénus restaurée, an assemblage comprising a readymade plaster set on a metal base and restrained by rope, is dated 1936/71, indicating that this iteration hails from a later Arturo Schwarz edition of 10, plus artist proofs (est. £350–500,000; $687–981,000). Ray was closely involved with the regeneration of the 1936 object. The work, based on the Medici Venus in the Galleria degli Uffizi in Florence, is bound by rope, instilling a Marquis de Sade element to the classic figure, Ray’s play on sexuality and beauty.

Usually freighted with cutting-edge contemporary art, sales at Phillips are changing course, thanks in part to the guidance of Hugues Joffre, the ex-Christie’s specialist who is now European and U.K. chairman for the house.

“The mix,” says Joffre, “is more postwar, principally European, so it’s going to have a very different look. All of it is privately sourced and hasn’t been seen for 15 years.” An exception is a 2011 text-saturated painting in oil, charcoal, and graphite by Glenn Ligon, Stranger in the Village. It was inspired by James Baldwin’s smoldering essay of the same title, penned in 1955, about his experience visiting a tiny, remote Swiss village. The work is estimated at £1.2 million to £1.6 million ($1.8–2.4 million).

February 11 / Christie’s / PostWar & Contemporary Art, Including Works from the Collection of Marc Corbiau

Hoping to continue the house’s extraordinary run from the November sale in New York of Alexander Calder works from the Arthur and Anita Kahn collection, Christie’s this time offers the artist’s Crag with Yellow Boomerang and Red Eggplant, a standing mobile in painted sheet metal and wire from 1974. The nearly eight-foot-tall piece is estimated at £500,000 to £700,000 ($745,000–1 million).

The house’s star lot is the rare-to-market Francis Bacon Two Figures, 1975, consigned by the artist’s close friend and biographer Michael Peppiatt, whose Francis Bacon in Your Blood: A Memoir was published last year. The painting depicts two nude male figures entwined in a passionate embrace and seemingly tumbling downward at top speed, as if miming the sexual abandonment of their embrace. They are contained in a kind of gridded cage reminiscent of Alberto Giacometti’s Palace at 4 A.M. The painting brings to mind both Michelangelo and Eadweard Muybridge, with its fleshy curves and locomotion, capturing the intensity of the artist’s relationship with George Dyer, his muse and lover who committed suicide on the eve of Bacon’s major retrospective at the Grand Palais in 1971. The painting followed a harrowing series, the so-called “Black Triptychs,” which reflected Bacon’s grief over the death of Dyer; this work appears to break off from that tragedy. The canvas originally contained another section depicting a male dwarf watching the lovers in what must have been a disturbing and voyeuristic vein. That separated section is now titled Portrait of a Dwarf. After Peppiatt acquired the work in its entirety directly from Bacon in 1975, the artist took it back, cut the canvas, and returned the revision to Peppiatt, who has owned it ever since. It is estimated at £5 million to £7 million ($7.5–10.4 million).

Even with the dramatic Bacon, Christie’s is taking a cautious approach to the season, according to Francis Outred, the firm’s European head of postwar and contemporary art. “We’re shooting for less flashy, more humble sales, and taking relatively few risks,” Outred says. “We’ll have fewer lots and lower overall value but potentially higher overall return in the end.” In that respect the auction catalogue itself will be downsized from Manhattan-telephone-book scale to something more modest, old-style, and easy to carry.

Highlights range from Adrian Ghenie’s Sunflowers in 1937, 2014, a more-than-nine-foot-square oil on canvas infused with the terrible history of Nazi-era destruction of “degenerate” art (est. £400–600,000; $596–895,000), to Jean-Michel Basquiat’s late but energized Después de un puño, 1987, in acrylic, oil stick, and Xerox collage on canvas (est. £6–8 million; $8.9–11.9 million). The seven-foot-tall canvas featuring a top-hatted, skeletal figure amidst a blizzard of cryptic text and invented symbols somehow escaped notice when it was displayed in the Modern section of the Armory Show in March 2013 by Tokyo’s Galerie Sho Contemporary Art, where it was offered at $13 million.

There’s also a star School of London offering with Lucian Freud’s captivating portrait Pregnant Girl, 1961, depicting the cropped visage of the napping 18-year-old Bernardine Coverley, bare-breasted, her face in profile, a coverlet over her abdomen. Coverley died in 2011 at age 68, four days after Freud’s own death. “It’s a modern-day Venus,” observes Branczik, “embracing the theme of birth and life.” The painting (est. £7–10 million; $10.4–14.9 million) was last publicly exhibited as one of 130 works in the Freud show in London’s National Portrait Gallery in 2012.